by Vanessa Ganguin
in Business and Economics 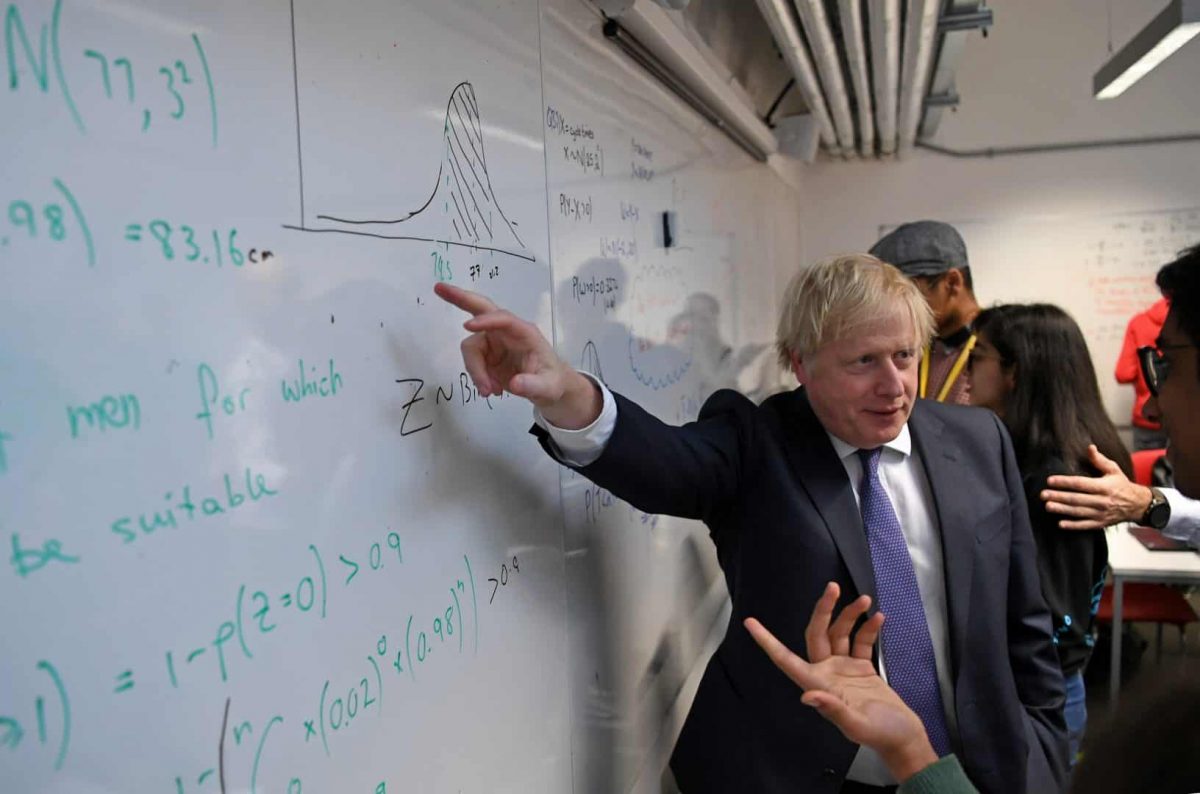 “Our recommendations are likely to reduce future growth of the UK population and economy compared to freedom of movement, by using skill and salary thresholds,” added the chair of the influential MAC Committee.

The MAC is an advisory non-departmental public body sponsored by the Home Office. It was commissioned by Home Secretary Priti Patel to compile evidence, research and review how an Australian-style points-based (PBS) immigration system could be introduced in the UK, to strengthen the UK labour market post-Brexit.

Boris Johnson and Priti Patel had alluded to such a system with no explanation of how it would work or how it would benefit the UK economy.

The report has recommended a system less like the Australian-style system, but more of a mixed system, with minimum salary thresholds for those people coming to the UK with a job offer, and a points-based system only for people arriving without a pre-arranged job offer. “Talented people” would be able to apply for a work visa under the new points-based system.

Boris Johnson is not obliged to accept the committee’s recommendations. However it is likely to inform the Government’s immigration policy having gathered evidence on how these changes would work for UK businesses and the economy.

The committee urged the Government to make decisions on the UK’s future immigration system soon, to give employers “adequate time” to prepare for its introduction in January 2021.

A headline takeaway from the report is a recommendation that the Government should reduce the salary threshold for skilled migrants to £25,600. A reduction of the threshold has been expected with an end to freedom of movement from EU and EEA countries.

If the Government wants a points-based system, it should introduce it in the route for skilled workers without a job offer, the MAC recommends. Talented individuals would register their interest in coming to the UK, with monthly invitations to apply drawn from this pool. This is in line with other points-based systems.

The report’s other recommendations include:

The Committee urges the Government to make decisions on the UK’s future immigration system soon, to give employers adequate time to prepare for its January 2021 introduction, and this is crucial to protect UK businesses and their ability to grow and cope with the challenges of Brexit.

“No perfect system exists and there are unavoidable, difficult trade-offs. The largest impacts will be in low-wage sectors and the Government needs to be clear about its plans for lower-skilled work migration,” warned MAC Chair Professor Manning. “The Government should ensure that the mistakes of previous UK points-based systems are not repeated.”

Purely Points Based System would harm the UK economy

Replacing freedom of movement with a points-based immigration system after Brexit could cut economic growth and may only lead to small improvements in standards of living, the report warns.

Moreover, the Government’s proposed overhaul of migration rules could have “zero effect” in creating more British jobs for British workers.

The Committee warn having skill and salary thresholds for migrants compared to freedom of movement is “likely to reduce future growth of the UK economy” as well as the population. The report advises keeping the system “simple” but said labelling it as a points-based system (PBS) would “only be cosmetic and have no purpose”.

The report estimates “very small increases in GDP per capita and productivity” and slightly improved public finances”, but Professor Manning warned this would not equate to improvements in “an individual’s living standards”.

Asked on Tuesday morning if the changes could boost the availability of British jobs for British workers, he said reviews of the impact of migration on UK wages and employment opportunities found “pretty much the impact is there will be zero effect”.

He added: “Immigration hasn’t really harmed people’s employment opportunities or their wages but equally it hasn’t really benefitted them very much either.”

The report makes clear that no other country uses a Points Base System (PBS) as its “only route for work migration”.

It said: “Using the broadest definition, any selective migration system can be thought of as a PBS, because it could be presented as a system with points, though we would question the value of doing so purely as a cosmetic exercise. We are not aware of any country that uses a PBS as its only route for work migration.

“A PBS tends to be part of a wider work migration system which may operate with, or without, requiring a job offer, or give more points if there is a job offer. Work migration also sits alongside routes like study, asylum and family migration; so, any PBS route only represents a share of overall immigration.

“As we recommend keeping the system relatively simple, we think that packaging in this way would only be cosmetic and have no purpose.”

Any PBS should also have options for skilled workers who do not have a job offer so “talented individuals” could register their interest in coming to the UK with monthly invitations to apply, according to the findings. Professor Manning, who steps down at the end of February, said the Government needs to make decisions soon so employers have “adequate time” to prepare for changes due to come in in January 2021.

Ahead of the report, on Monday, the Prime Minister indicated that Government departments and agencies will have a greater say in controlling immigration numbers for Britain’s different industries after Brexit.

On Monday the Prime Minister also defended his plan to fast-track entry to the UK for scientists, researchers and mathematicians after it was pointed out that the current cap was never met.

Boris Johnson launched his new “Global Talent” visa to replace the Tier 1 (Exceptional Talent) in the scientific sectors – from February 2020.

Unlike the current scheme, it will not have an upper limit of applicants and will accept endorsements from a wider pool of organisations. It will be managed by the UK Research and Innovation quango to enable UK-based research projects that have received recognised prestigious grants and awards to recruit global talent.

In an interview at the King’s College London Mathematics School, Boris Johnson hinted the model could be extended to other bodies overseeing industries relying on low-skilled labour.

“What we want to have is a system that is responsive to the needs of the UK economy in all its dimensions,” he replied when asked about the possibility. “So, yes, there will be sectors like agriculture or retail, hospitality, whatever, that do need to continue to attract low-skilled workers, but we want to make sure that’s done very much on the basis of jobs they have to come to here in the UK.”

But questions have been raised over the “Global Talent” scheme because the 2,000-applicant cap that the previous visa system had was never met. The PM insisted: “There are more and more people who want to come and study in the UK and work in the UK and what we are saying to the world is as we come out of the EU we are going to be open not just to talent from the EU – we will be, of course – but we want to attract mathematical and scientific talent from around the world.”

The “Global Talent” scheme will enable UK-based research projects that have received recognised prestigious grants and awards to recruit global talent. Applicants will not need a job offer before arriving in the UK under the visa and it will provide an accelerated path to settlement for all scientists and researchers who are endorsed on the route.

The Liberal Democrat home affairs spokeswoman Christine Jardine criticised the scheme as “nothing more than a marketing gimmick,” explaining: “Boris Johnson is showing that he fundamentally doesn’t understand what makes our science sector so successful. Changing the name of a visa and removing a cap that’s never been hit is not a serious plan.”

Meanwhile, North of the border, Nicola Sturgeon has called on the UK Government to engage with proposals for a separate Scottish visa system aimed at tackling the country’s post-Brexit needs.

While she chimed with the MAC’s call for pilots for rural areas where more population is necessary, the Home Office indicated a separate Scotland system is unlikely for now.

On Monday, the First Minister published a document, Migration: Helping Scotland Prosper, which floated a number of ways in which the Scottish system could diverge from the rest of the UK.

“We want to understand the specific needs of the whole of the UK, which is why we have engaged extensively with stakeholders across the UK, including the Scottish Government.”

The First Minister said demographic change after Brexit would hit Scotland harder than the rest of the UK, meaning a bespoke approach was needed to attract talent north of the border.

Nicola Sturgeon insisted: “The hard reality is this – without continued inward migration in the years ahead, there’s a real risk that Scotland’s working age population will fall.

“The end of free movement will, in my view, harm the whole of the UK, but it will be uniquely harmful for Scotland. It’s likely to weaken our economy, damage the delivery of our public services and make some of our communities less sustainable.”

The First Minister admitted there have been no discussions with the UK Government about the proposal, however she hoped that Boris Johnson would engage with the Scottish Government on the issue.

She writes and advises on immigration matters.

RELATED: Update: how to apply for settled status for EU citizens now the UK leaves the EU on 31 January