When I first saw Heathers I was in hospital. It was, perhaps, an unusual choice; a blackly comic satire about a popular girl (Winona Ryder’s Veronica) who has come to hate the clique she’s a part of (the titular Heathers, played by Kim Walker, Shannen Doherty and Lisanne Falk). Veronica gets roped into murder when […] 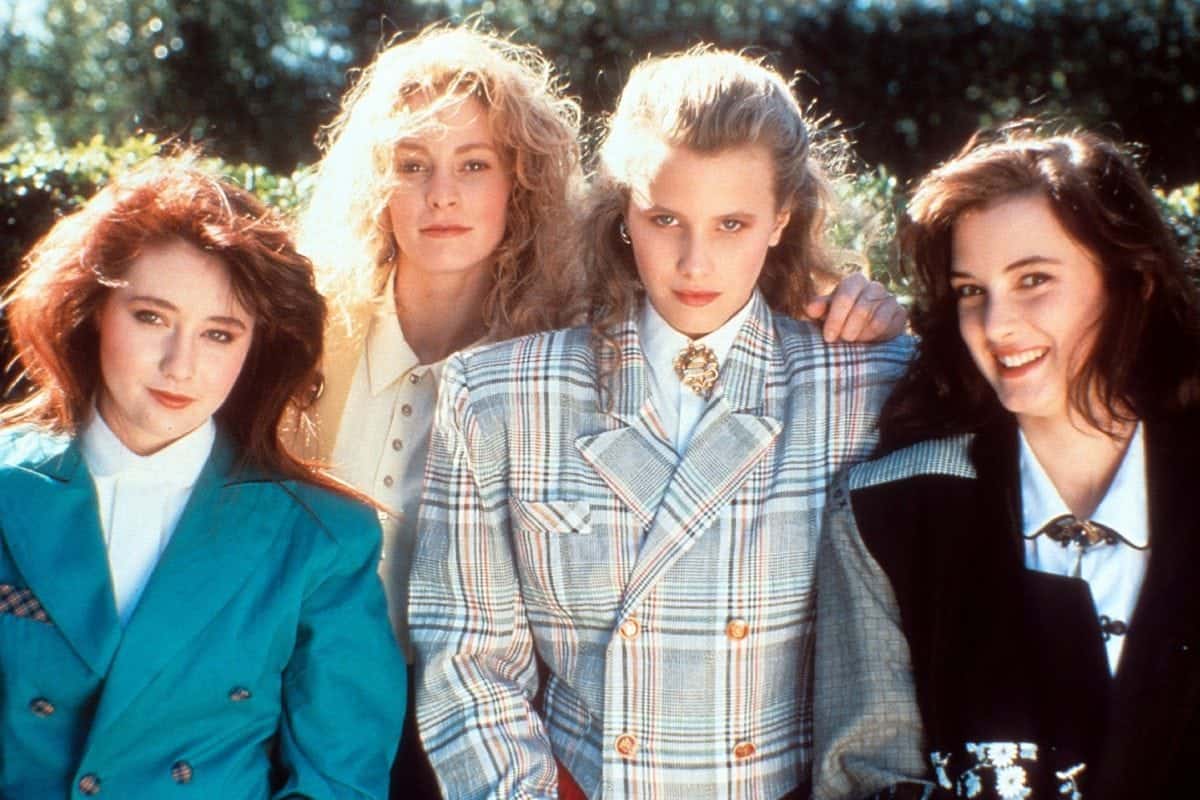 When I first saw Heathers I was in hospital. It was, perhaps, an unusual choice; a blackly comic satire about a popular girl (Winona Ryder’s Veronica) who has come to hate the clique she’s a part of (the titular Heathers, played by Kim Walker, Shannen Doherty and Lisanne Falk). Veronica gets roped into murder when her new boyfriend JD (Christian Slater) serves one of the Heathers a ‘hangover cure’ that is actually drain cleaner. The two of them make this, and other deaths among the popular kids at school, look like a suicide. For me, in that moment, Heathers really hit the spot. I always had a pretty dark sense of humour and it helped me stop focusing on whatever complication I was in hospital for at that time. That may be part of why I retain such a fondness for the film, but it’s far from the only reason.

Heathers is many things. You could simply watch it as a darkly satirical teen movie, but it also still feels like a commentary on violence in schools with serious contemporary relevance, and that’s all before you consider it as a critical response to 80s teen cinema. That it manages to do all this while being sincerely funny is one of the master strokes of Dan Waters’ screenplay and Michael Lehmann’s direction. Waters, like many of the writers of the best remembered teen movies, gives his characters a whole language that seems at once authentic to the characters and funnier and more articulate than the majority of real teen-speak.

“Fuck me gently with a chainsaw, do I look like Mother Teresa to you?”
At its most basic level, Heathers is a consistently amusing black comedy, shot through with dialogue that is complex but highly quotable and always lands the joke. Lehmann’s direction creates a world that is entirely the film’s own, but nevertheless recognisable to us. After the surreal image of Veronica, buried up to her neck, being hit by a croquet ball during the credits sequence, the first proper scene finds the Heathers entering Westerburg’s cafeteria to conduct the lunchtime poll. There is something about this scene that makes it feel as though we are entering another world, it’s in the quality of the light and in David Newman’s dreamlike score. Beyond this, Dan Waters and Michael Lehmann create a high school environment that seems both realistic and entirely out of a movie. The people feel real, most of us will have known a Heather Chandler and it’s easy to imagine why Veronica, who seems to have formerly been a bookworm, hanging out with the ‘geek squad’ headed by Betty Finn (Renee Estevez), would have wanted to be sucked into her orbit. Equally, it’s easy to empathise with her wanting to break out, and understand her fascination with JD, who appears to defy high school’s caste system.

“And to think there was a time when I actually thought you were cool.”
The casting is perfect. As JD, Christian Slater clearly models his performance, both vocally and in his mannerisms, on a young Jack Nicholson, but he’s doing much more than an impression. Walking the line between sardonic and psychotic, JD is a compelling character and one who makes you feel bad for being drawn to him. Waters’ writing also walks a fine line, between funny and disturbing, particularly in the scenes between JD and his Dad, a construction company owner who takes frightening glee in destroying building. Their dynamic – JD calling his Dad “Son” and vice versa, is deeply weird, and hints at some of the reasons JD might be as messed up as he is. Winona Ryder, just 16 or 17 during filming, chased after Heathers from the minute she got the script, and it’s easy to see why. Ryder makes Veronica a truly rounded character, foregrounding her intelligence as she definitively rejects JD, but also making us buy into the anger and disconnection that drives her when she’s helping him enact his plans. Around Slater and Ryder is an excellent ensemble, all of whom seem to completely get the tone the film is aiming for. Everyone gets a moment to shine, from the briefest of parts (“My son’s a homosexual and I love him. I love my dead gay son.”) to each of the major supporting characters. Particular standouts include Kim Walker as Heather Chandler and Shannen Doherty, who absolutely nails the transformation from Walker’s sidekick to queen bee when Heather Duke sees her chance. All in all, Heathers feels like that very rare film in which none of the pieces could have been a better fit.

“Society nods its head at any horror the American teenager can think to bring upon itself.”
JD may only say this in a dream sequence, but today – as mass shooting after mass shooting inspires little more than ‘thoughts and prayers’ from those in power – it plays as Heathers’ most prescient line. This comes through with darkly hilarious clarity in the staff meetings that follow the Westerburg ‘suicides’. Adults in Heathers are completely out of touch, from Penelope Milford’s hippieish teacher Pauline Flemming to the other teachers, who are totally disconnected, to Veronica’s parents, who we see most often at recurring dinner scenes (“Great pate, but I gotta motor if I want to be ready for that funeral.”) This is one of the ways in which Heathers comes closest to fitting in with other teen movies of its time.

The 1980’s were, in many ways, the decade of the teen movie in American cinema. The genre took off in a big way with 1982’s Porky’s and Fast Times at Ridgemont High and later with the films of John Hughes. Teen movies were everywhere, and by 1988 they were ripe for satirising. Heathers doesn’t merely tweak teen cinema, early on it sticks a gun in the genre’s face and pulls the trigger. The film, unlike JD in that moment, doesn’t fire blanks. It seems unlikely to be a coincidence that the early 90’s were a relatively thin time for the genre, until Fast Times director Amy Heckerling established a new set of soon to be cliches with Clueless. If Hughes laid out high school politics and, particularly with The Breakfast Club, personified its tribes, but ultimately came out with a hopeful and nostalgic look at those years, Heathers is the cynic’s response. This is a film that not only recognises how shitty high school can be, it accentuates it. The fact the film has lasted and resonated long enough to warrant this restored 30th anniversary release is likely down to the fact that its concerns – bullying, peer pressure, wanting to fit in, even depression – have become ever more visible in our daily lives thanks to social media. It’s still a film that will strike a chord even as it makes new audiences laugh.

It may have made little impact on release, but Heathers is a film that has justifiably grown its audience over time. If you’ve seen it before, see it again, you know what a joy it is and you’ll almost certainly see or hear a gag you’ve missed. If you’ve never seen it this excellent 4K restoration is the perfect way to catch it for the first time. If you don’t like it I have only one question. “What’s your damage?”