There’s more to the French town than the film festival. All year round, its sunny climes and array of luxury amenities attract the world’s great and good, the movers and shakers. The high standards mean the bar is raised when it comes to its dining experiences, making it a mecca for visiting gourmands as much […]

by Shilpa Ganatra
in Food and Drink, Travel 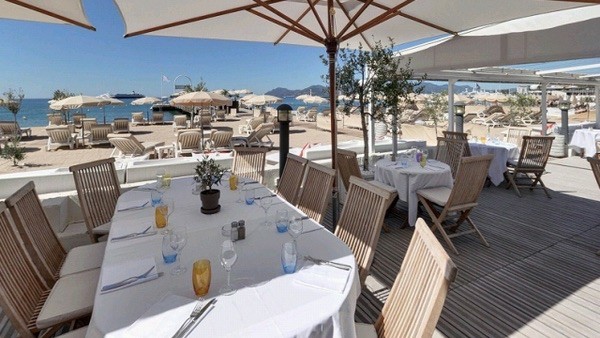 There’s more to the French town than the film festival. All year round, its sunny climes and array of luxury amenities attract the world’s great and good, the movers and shakers. The high standards mean the bar is raised when it comes to its dining experiences, making it a mecca for visiting gourmands as much as the film industry. When the two combine? A veritable feast of creativity.

Here are our top 10 restaurant picks for this year’s Cannes Film Festival.

1. Les Baccanales: So we may not be on the invite list for the film fest, but we can still sample the delights of creative chef Christophe Dufau at his wonderful Michelin-starred restaurant in Vence, Les Baccanales. For the Nespresso event, he has chosen to pay homage to Jacques-Yves Cousteau and Louis Malle’s Le monde du silence (The Silent World), winner of the Palme d’Or in 1956,with dishes such as ‘langoustines drunk on coffee’. Let’s hope that this cinemanic inspiration continues once he is back at the restaurant!

2. La Palme d’Or: Where better to eat during this prestigious festival than at a restaurant with the same name as the highest accolade awarded, La Palme d’Or. The restaurant of the Hotel Martinez (Grand Hyatt Cannes), its spectacular French gastronomy earned it two Michelin stars in 1991, and it has never lost them. This art deco restaurant in one of Cannes’ grandest hotels, opens up its doors to give a jaw-dropping view across the Mediterranean. No matter how impressive the view, it cannot compete with the quite extraordinary descriptions on the menu – where famous chef Christian Sinicropi exhorts us to believe in ‘a dimension of emotion and of sharing, a palliative reflected in a maiden voyage with the trappings of nobility and counter-intuitiveness, transporting us into a dance in three movements.’ What does that mean? No idea. Regardless, eating here is a special, unforgettable experience.

3. La Petite Maison: If you feel like getting away from the crowds a little then why not head along the coast to Nice. It may not have the hustle and bustle of the seafront in Cannes but there is still a chance for some celebrity spotting. La Petite Maison attracts a long line of dignitaries and stars. It’s known to be Nicolas Sarkozy’s favourite restaurant, while Elton John and Beyonce have been seen there in recent summers. The food, which has a strong emphasis on seafood, is good although not exceptional; the prices are expensive but not stratospheric. The proprietor has expanded her franchise, opening up restaurants of the same name in Cannes, Paris, London, Beirut and Dubai.

4. Choopy’s: One of our favourites for a quiet breakfast in the neighbouring town of Antibes is Choopy’s – a very cute café famous for their cupcakes, also do cooked breakfasts, but it’s really brunch as they don’t open until 10 (from 9am in the summer). They’re also not open on Sunday or Monday – you’ll find that many French restaurants and cafes aren’t open on these days, as they sacrifice the Sunday trade for a day of rest and Monday’s pretty quiet around town. You can definitely see their reasoning (except when you’re hangry…) Choopy’s is absolutely brilliant for the gluten-free diet, as all their delicious cupcakes are GF as well as stocking GF bread, and this is one of the few places in town you can get a soya coffee.

5. Cesars: Or if you would rather enjoy breakfast in the Mediterannean sunshine then you have to try Cesars at Plage Keller. The restaurant at the beach club is the perfect spot to take a coffee, an omelette and read the paper at one of their wooden tables on the street and watch the world go by.

6 C Beach: One of the best spots in Cannes to saok up the sun, the atmosphere, the film festival buzz and of course to grab some food! C Beach is just a few steps away from the Palais des Festivals. With this prime location it is one of the most popular private beaches frequented by locals, tourists and celebs.

7. Baoli Beach: Baoli Beach is a really good option if you’re going to spend some time in Cannes. It’s a lot of fun, with DJs and a great crowd making the most of the summer, day and night. This really puts the ‘club’ in beach club, with a party atmosphere under the palms. It’s a good place for celebrity-spotting too, but be aware, the prices do reflect this.

8. Aux Bon Enfants: For a taste of the local scene, away from the big names of the silver screen and the red carpet, Aux Bon Enfants is a small, family run restaurant. It is the opposite of Cannes chic, yet its long-standing obsession with fresh local produce makes it an institution. The Giorsetti family has been serving up unfussy, delicious Provencal favourites for three generations in this spot – with ingredients sourced from the market just next door. There’s no menu, you just eat what you’re given. You can’t reserve a table on the phone and they only take cash. This is a haven for locals, tourists and foodies alike – but don’t expect pomp or ceremony. It’s noisy, cramped…and wonderful. Expect to pay from €25 for the menu.

9. Sea Sens: If you prefer to have a rooftop view over the proceedings that just screams Cannes chic, go to Michelin star Sea Sens on the fifth floor of the boutique Five Seas Hotel. Sit in the elegant dining room and look out across a stunning view of Cannes, while Chef Arnaud Tabarec impresses you with his astonishing gourmet menu using fresh market foods and spices from the five continents. Try the fois gras with mango and beetroot ravioli, or the blue lobster with combawa. Jérôme De Oliveira, World Pastry Champion, will then make your dessert. This is a glamorous place, and in the summer evenings the poolside terrace will fill up with the beautiful people drinking champagne and cocktails in the sunset. The food isn’t too prohibitively expensive, with mains starting at €35 and menus from €55.

10. La Potiniere: And finally, to made sure you are right in the hub of the action go to La Potiniere, just opposite La Palais de Festivals. This is one of the best restaurants to be found in Cannes, specialising in Mediterranean cuisine at reasonable prices. Seafood is a speciality – try the tender, juicy roast cod – or just sit back and allow the chef to deliver the best fresh produce of the day with the plat du jour- you can get this for around €15, or a two course meal for less than €20. Brilliant service, nice décor- there’s no wonder this place is popular- and has been since 1948, with Pablo Picasso having considered it a favourite haunt.