Jaguar’s incredible looking sportscar is an aesthetic delight, but does it perform as well as it looks when you’re living with one? 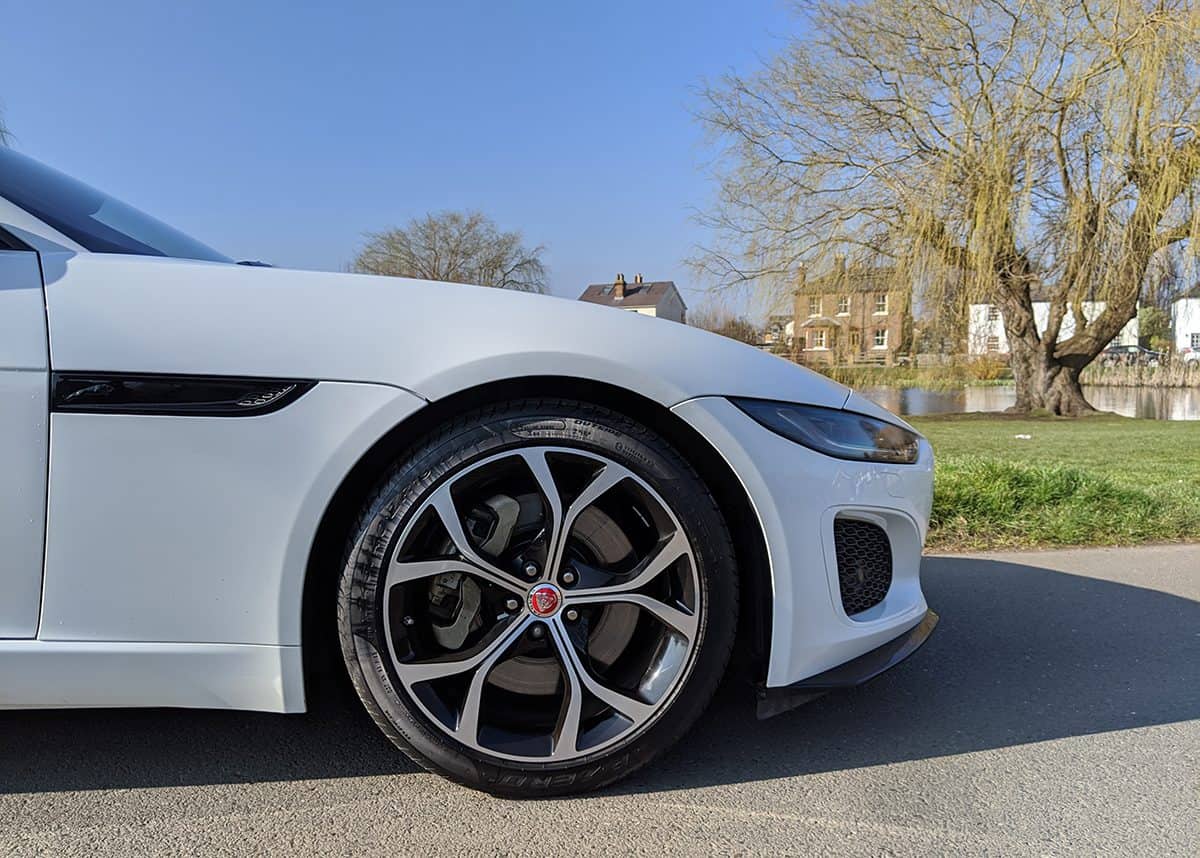 In the world of consumables, aesthetics can hide a multitude of sins. If something simply looks great, people will fall in love with it. The same applies to branding, as we see so regularly in the automotive world, where pretty much identical cars carry very different price tags purely as a result of the badge. When aesthetics and branding collide to form the perfect package, then you know you’re onto a winner.

Jaguar’s F Type pulls this very trick. It carries the elegant, suave branding of Jaguar and it looks sensational. Usually such matters are subjective, but the F Type is objectively beautiful. If anyone tells you otherwise, you know you’re talking to a contrarian who just wants an argument. This thing is absolutely stunning.

Every time I caught a glimpse of it outside my house it made me smile. If you can afford it, it’s worth having one as an artistic centrepiece for your drive.

The model tested came in Fuji white with the black pack optional extra. This changes the surrounds on the car’s exterior from chrome to black, and it just worked. With the optional 19-inch wheels, there was no other conclusion to reach – this is a handsome car.

But does the stunning exterior pull the wool over your eyes? Is this a car to be looked at rather than driven?

This was also the entry level P300, coming equipped with a turbo-charged 2.0-litre inline four engine which produces 300PS, or just shy of 300bhp. If you’re the sort of car owner who likes to throw numbers around in the pub to impress your friends, then the P300 underwhelms on that front: 0-60 takes 5.4secs.

In a world where cars have reached crazy levels of acceleration, and hot hatches are ticking that sprint off in around a second faster, you might begin to wonder where this F Type fits in. That’s where the driving experience has to deliver.

The F Type was far more at home on country roads, so the overriding temptation was to give it what it wants. On the sweeping B-roads in and around the Surrey Hills, the F Type fairly bristled along. This is where the advantages of its power output really started to shine.

The smaller engine means less weight and more agility. The steering is precise and you can judge your inputs to perfection. You can attack corners with confidence, there’s plenty of grip and the back end is playful without being terrifying; you never really feel as though you’re out of control. The low seating position also adds to the overall sporty sensation.

All the power in the P300 is usable in a real-world setting. You can really push it to its limits without fearing for your licence or your life. There’s a basic thrill to that, feeling as though you’re getting the most out of the car, which really puts a smile on your face. It delivers performance where you most want it in order to enjoy it.

The ride quality is supple enough to make it usable in town, too. You can flick it into dynamic mode which firms things up, but having it in its normal setting makes it forgiving enough over speedbumps and potholes. You certainly don’t experience anything too jarring.

One downside is the throttle response. It has a very revvy setup, always looking to leap up to 2,500rpm and push on. This can make the throttle a little unpredictable, sometimes shooting away when you just want to nudge forwards in town. A major victory in this setting for the F Type, however, is its stop start functionality. It cuts the engine out when you’re at standstill, but it kicks into life instantly. This function can be painful in some cars, but Jaguar have got it spot on in here.

When you’re looking to open it up, the gearbox can be a little slow to react, so it’s advisable to bring the paddle shifts into play and change down yourself in anticipation of an overtake. Otherwise, you plant your right foot and it takes a second or two to respond and select the right gear, sometimes shifting down twice to deliver the appropriate response. Changing gears manually is smooth enough, though, and you can do it via the paddles or the gear stick.

On the motorway it is quite noisy, but nothing you wouldn’t expect from a sportscar and nothing that would make a long journey unbearable. It also picks up speed from midrange well enough to make it a competent performer in this environment.

The F Type has a nice, airy and spacious cabin. There’s loads of room in here, with plenty of headroom and compartments for your bits and pieces on longer journeys, as well as two usb ports for charging your phones.

The 10-inch touchscreen in the centre console works well and is easy to use, and if you prefer old fashioned knobs and buttons, it has those for your temperature control, AC, heated seats, which don’t come as standard, and heated windscreens. The Meridian sound system that JLR uses also works well in this car, and that does come as standard.

As do the rear parking camera and parking sensors. Visibility out of the back is okay, but having a bit assistance doesn’t do any harm. One thing that hampers rearwards visibility is the spoiler. It pops up at automatically at around 60mph to aid downforce, but it does obscure a fair chunk of the view out of the rear window.

You can deploy the spoiler manually at lower speeds if you wish, but it is a blemish on this car’s otherwise near perfect looks. It just looks like a flap of metal presenting itself at a jaunty angle, rather than an integrated part of the bodywork. It’s the only aesthetic black mark this car has.

The boot space is perfectly acceptable, too. You’d easily get a couple of cricket bags in there and I did the weekly shop in it. If you’re heading away for a long weekend in the countryside, which this car is born to do, then you’ll fit everything in without issue.

On the consumption side, I got 26mpg over the course of the week, which is perfectly respectable, especially as I couldn’t help but it drive it along country roads to just enjoy it. On longer, more measured journeys, it will achieve 30mpg and above easily enough.

If you’re buying a sportscar, you want it to look good and on that front, the F Type spectacularly delivers. I don’t know if this has come across, but I rather like the way it presents itself. The drawback, however, is that you might also want a bit more performance which the step up to the P450 F Type delivers with its V8 engine.

In the right setting, the P300 is an absolute joy, though. It is perfectly precise and you can really open it up and use all of the available power on the road.

As a lifestyle car, too, the F Type in P300 guise works perfectly. It’s very accessible and you’ll look good wherever you park up in it. Yes, you might want a bit more grunt and, on that front, other options make greater appeal, but for the heady combination of good looks, usable performance and agility, this F Type is a tantalising proposition in its own right.