The Abarth 595 Competizione isn’t subtle, but then you wouldn’t really want it to be. We find out how that translates to living with one. 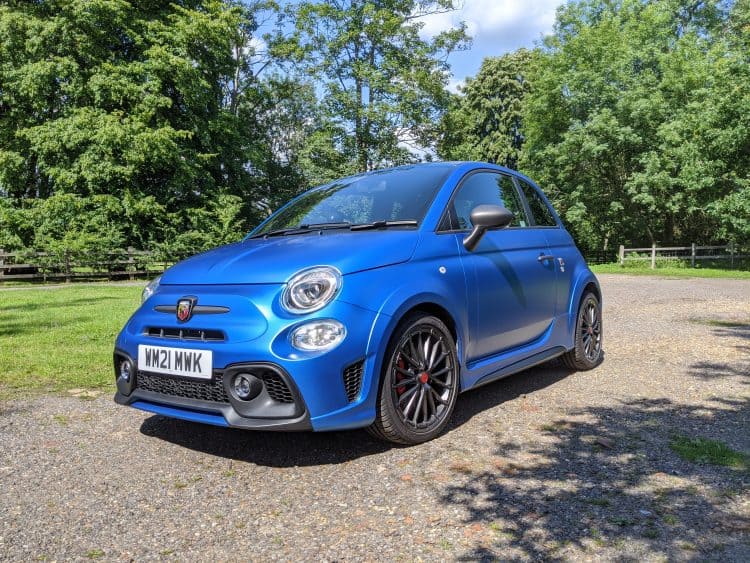 It’s pleasing that, in 2021, there’s still room for the hyped-up boy/girl racer on the roads. As engines have become smaller to meet emissions regulations, manufacturers have found ways of making cars, somewhat counter intuitively, a lot faster. Fast hatchbacks today carry the acceleration of recent super cars, making them almost too fast for everyday driving and with price tags that can only appeal to an elder audience. Enter the super minis and the likes of the Abarth 595.

With its 1.4-litre turbo-charged engine, flared wheel arches and rowdy exhaust (Record Monza Exhaust fitted as standard to the Abarth 595 Competizione tested here), the Abarth 595 carries the same basic appeal that it has done for the last decade: a simple focus on making driving fun.

The emphasis on fun comes at the expense of almost everything else. Run this car in an urban setting, dodging potholes and praying there are no speed bumps to interrupt your progress, and the Abarth 595 can quickly become long in the tooth. Get it on a flowing B-road, however, and you’ll forgive it almost anything. This is its raison d’etre.

The stiff ride brings the car to life in this setting and you’ll forever be tempted to take the scenic route home to justify it. And justify it you will.

Hit the Abarth button on the dash, listen to that Record Monza Exhaust burble with angry intent and feel the throttle response instantly sharpen; this is why cars like this carry enduring appeal, and not just to acne-faced teenagers.

It hustles with real purpose in the right setting, the manual gearbox being pleasant to use and the Abarth 595 punishing you for botched gear changes. It’s happy to rev all the way to the red line and the boost gage on the dash lets you know when the exhaust is really going to give off its throaty rasp. The chassis feels alive beneath you and you get a great sense of connection with the road to accompany the great sense of theatre.

It’s not, however, without its flaws. The seating position is too high. You can’t move the steering wheel towards or away from you, leaving you sitting in a rather odd position. The pedals are too close together. The torque steer from the front wheel drive power delivery can be unpredictable. The steering itself is vague, lifeless and devoid of emotion. Yet somehow, these flaws only serve to amplify the experience. When driving the Abarth 595 for the sheer hell of just driving it, it’s an absorbing, all-encompassing experience. That’s what you want from a car like this, isn’t it?

But what’s it like the rest of the time?

The very things that make it so good also hold it back; it’s a wonderful contradiction. Here’s a car built on the platform of a city car – the ever-popular Fiat 500 – that you wouldn’t really want to drive in a city. It’s a bit overwhelming, with the rigid ride and noisy exhaust serving only to wear you down in traffic.

To focus on those aspects, however, is to entirely miss the point. The Abarth 595 is a Faustian Pact, trading everyday comfort and usability for thrills and spills when time and space allow.

It’s not all bad around town, though. The compact nature of the Abarth 595 makes it incredibly easy to traverse tight spaces, even if the turning circle is laughably large. Rear parking sensors make parking easy, although you can look over your left shoulder and pretty much see where the rear bumper is anyway.

The rear seats fold down to make the load space larger and those seats also have Isofix. Although, a point to note, I could only get my son’s car seat in via the boot; the space between pillar and collapsed front seat was insufficient to squeeze it through the door. That’s something to consider if you intend on carrying larger passengers. 6ft and above and the rear seats are going to be one hell of a squeeze.

If you’re travelling light, then you can get everything in without issue. Cricket bags, a trip to the supermarket, no drama. Cars like these weren’t designed for heavy loads and long journeys, as is obviously apparent. Shed the weight and find an open road. That’s what they were designed for.

Sights and sounds of the Abarth 595

The Abarth 595 isn’t subtle. The model tested, the Abarth 595 Competizione, comes with the Record Monza Exhaust as standard and it’s worth talking about it because it’s superb. The noise it generates from the 1.4-litre engine is sublime. It really rasps when the boost gauge on the dash darts round to 2.0 in Abarth mode and it rumbles away pleasingly on throttle lift off.

Again, it’s set up for open road driving, but in the right circumstances it’s a wonderful thing with the pops and bangs echoing back at you from roadside walls and shrubbery. Similarly, the styling is loud and in your face. The model tested came in rally blue and was fitted with the optional body kit, further flaring the wheel arches and lending a more flamboyant gait to the Abarth 595.

It certainly stands out from the crowd in a good way. There’s a danger that the aesthetics could become tired because it hasn’t really changed since the Fiat 500’s reintroduction in 2007, but the Abarth 595 retains considerable appeal. You’ll know straight away if you want one of these or not and the cult following Abarth has generated speaks to this. They also seem to hold their value relatively well on the used car market.

You buy a car like this based on emotion, allowing your heart to overrule your head. It was ever thus with Italian cars. You can go for more practicality and buy German. You can go for more reliability and buy Japanese. There’s something that tugs at the heart strings a little here, though. Perhaps it’s the imperfections. We’re used to cars being practical, comfortable, accessible and fast all the same time. Taking a step back and opting for exploitable aggression and driver engagement at all costs possesses its own charm – the Abarth 595 Competizione has that in spades.

Being behind the wheel of a noisy attack dog, always straining to be freed from the leash, is hugely enthralling and entertaining. It draws you in and you can end up a long way from home enjoying the theatre before coming back to reality. There are enough imperfections to irritate, but they only add to the charm in their own way. If Abarth could lend a bit of feel to the steering, there really wouldn’t be much to criticise. The firm ride is probably a sacrifice worth making in return for what the 595 delivers in the right setting.

Overall, it’s wonderful that these cars still exist. Having an aggressive car that can be driven appropriately without risking your licence is a good thing. Flinging it round country lanes, using all the performance and traction, listening to the exhaust sing, will plant a smile firmly across your face. The Abarth 595 Competizione is a car that drives the way it looks – you know exactly what you’re getting and it doesn’t disappoint.