And shocked scientists have named it Mary after the mother of Jesus Christ.

by SWNS
in Science, Tech and Auto 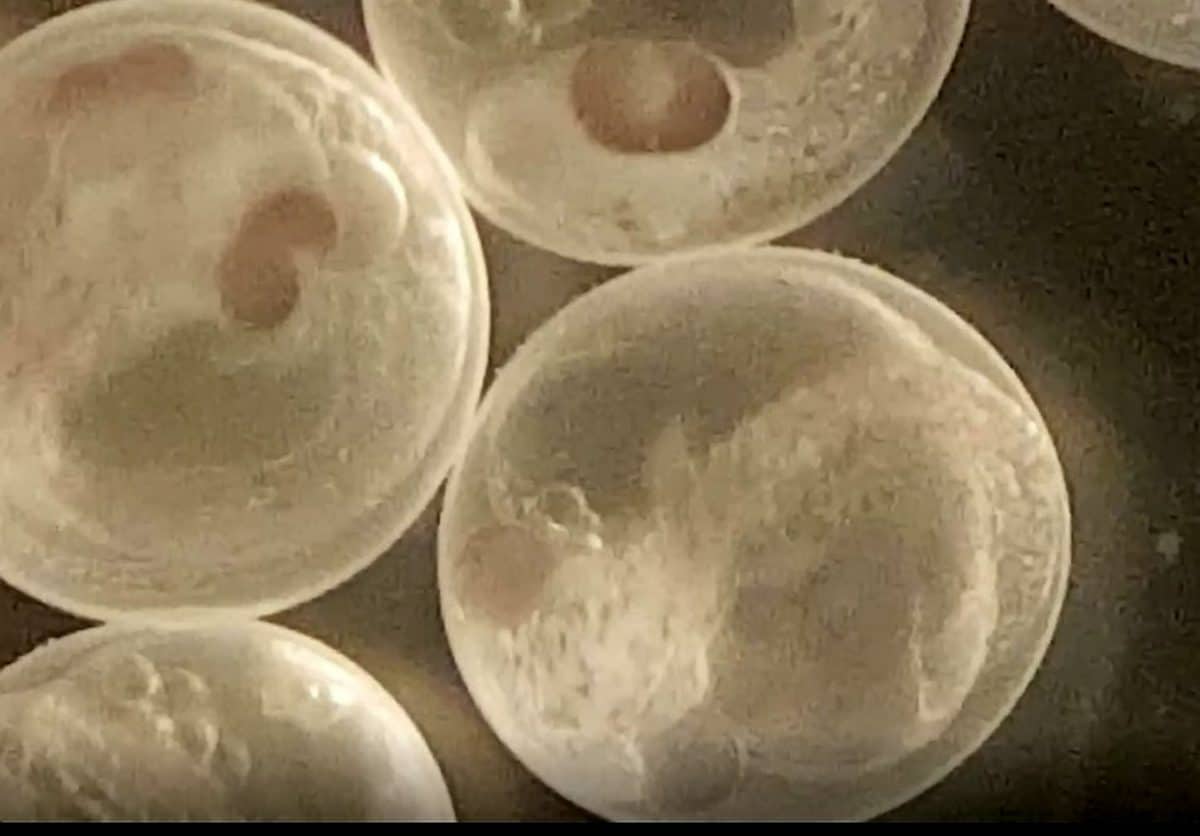 A Scottish stickleback fish has had a ‘virgin birth’ after fertilising its own eggs internally in a world first, scientists have revealed.

And they have named it Mary after the mother of Jesus Christ.

Normally a female would lay her eggs and a male fertilise them. Remarkably, Mary fertilised her’s while they were still inside her.

It’s the first known case of the development of babies inside a normally egg-laying species following internal fertilisation.

The British team discovered Mary by chance on an expedition off the far north west of Scotland to gather wild sticklebacks for experiments.

Mary’s unusual pregnancy meant the ‘virgin’ stickleback was egg-bound and close to death when her predicament was noticed.

So the decision was taken to save the lives of her young by putting her to sleep and delivering the near-complete embryos by caesarean section.

Amazingly, 54 embryos were successfully delivered and hatched into baby fish or ‘fry’, the researchers reveal in Scientific Reports.

They then grew to adulthood in aquariums at the university where around 20 still survive nearly three years on.

The team has also successfully bred from Mary’s offspring in normal aquarium conditions.

Dr Laura Dean, of the School of Life Sciences at Nottingham University, said: “We were astounded at what we found when we examined Mary in our lab in the Outer Hebrides.

“She looked like an ordinary egg-bound fish – so we couldn’t believe it when we found she had almost completely developed embryos inside her ovaries.

“This is pretty much unheard of in an egg laying species. The embryos were perfectly healthy, not deformed in any way and most have gone on to live a normal adult lifespan.”

The three-spined stickleback, Gasterosteus aculeatus, is a small fish that is common to both fresh and coastal waters in the Northern Hemisphere.

Its DNA has been fully mapped as for a wide range of genetic research. Populations in lakes with more fish predators develop more bony plates.

Others lack spines or are much larger or smaller than the norm. The evolutionary basis is believed to be predation pressure.

It’s the only record of this form of fertilisation and delivery of live offspring in any fish in the world.

So Dr Dean and colleagues said there are three known mechanisms by which this abnormal type of reproduction might have occurred.

And two were dismissed. The first was a process called ‘parthenogenesis’ where the fish clones herself and the second that she was a hermaphrodite – with both male and female sex organs.

Dr Dean said: “We were able to rule these two possibilities out because, in parthenogenesis, her offspring would have been genetically identical to the mother, or, if hermaphroditism, they would have only had versions of genes that she had, with no genetic input from anywhere else.

“So, we did some very simple genetic testing on the offspring and found they had versions of genes that Mary didn’t have and so must have had a father.

“Our theory is somehow sperm had got into the fish, fertilised the eggs and they developed into normal two-parent embryos.

“What has probably happened is she has gone into a nest to lay her eggs where another female had already laid her eggs which had been covered with sperm by a male stickleback.

“Somehow some of the sperm in the nest must have got into Mary, presumably through her egg tube, and fertilised the eggs inside her but she never laid the eggs.”

Stickleback breeding has been the subject of long-term research. Males change colour during the breeding season – becoming bright red below. 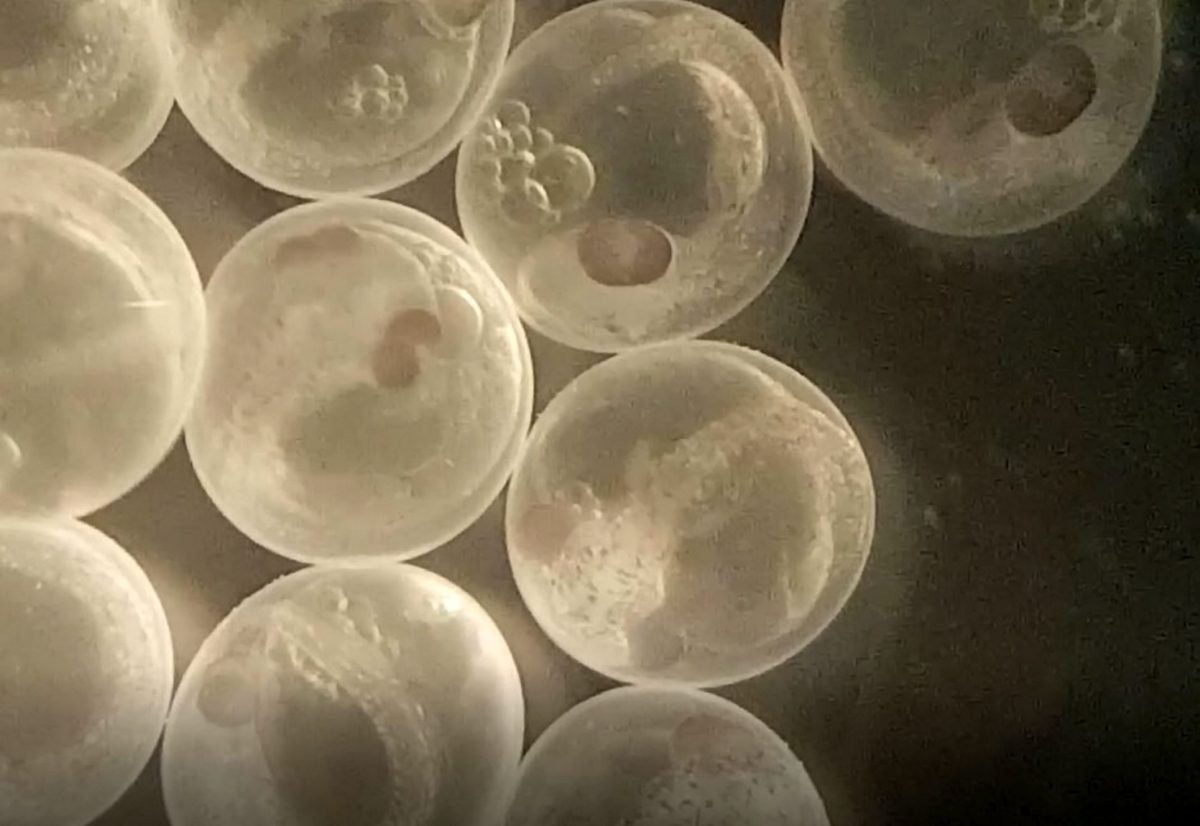 Females develop eggs and become swollen with them. A breeding male that encounters such a female immediately performs a zigzag dance.

The two enter into a complex interaction that ends with the male leading the female into an already prepared nest – where she lays her eggs and in turn he fertilises them.

Andrew MacColl, associate professor of evolutionary biology, said: “Although this almost accidental find revealed a vanishingly rare phenomenon, it might help us to understand a really important change that has happened throughout the tree of life.

“Most animals lay eggs, but some – including almost all mammals, but few fish – retain their eggs inside and give birth to live young.

“Although this appears to be a difficult thing to achieve in evolution, this one little fish seems to have got there almost by itself.”

After normal stickleback births the male guards the young, taking them out for foraging and then leading them back to the nest if danger threatens.

The adults typically die after breeding, but with the larger females laying 300 eggs in a clutch, they are survived by a lot of young.

In a stable stickleback population, only two of those young must survive to maturity.

The finding of fertilised eggs inside a stickleback has only been recorded once before, in a paper published in the 1950s – as a picture of the fish with no delivery of the embryos.

The researchers are now actively looking, on subsequent fishing expeditions to Scotland, for more female sticklebacks who may display the same phenomenon.

This will show if there is a chance it may not just be a freak incident but could be an indication of an evolutionary or genetic change in the reproductive mechanism of the species.

They are also hoping to secure funding to investigate the internal mechanisms which allowed the embryos, which would normally have developed in water and been fanned and cared for by the father, to develop within ovarian fluid and without this care.

Sticklebacks eat small crustaceans and insects. During the breeding season, some males specialise in sneaking into nests and eating the eggs of other males! Others go around in schools and raid nests for the same purpose.