by Ben Gelblum
in Science, Tech and Auto

Passenger jets flying through clouds can increase rain and snowfall up to FOURTEENFOLD, according to new research.

The phenomenon is caused by the way the plane’s wings and propellers pass through them, say scientists.

These expand the surrounding air triggering the temperature of the water droplets to nosedive – sending more down to the ground.

The drifts are particularly common over airports where many planes cross the cloud barrier as they take off or come in to land.

And it has nothing to do with aircraft engine emissions.

Lead author Professor Dimitri Moisseev, a meteorologist at the University of Helsinki, said: “The interesting thing about this feature is it is caused by aircraft, but it is not caused by pollution.

“Even if there would be absolutely ecological airplanes, which don’t have any combustion, no fuel or anything, it would still happen.”

The findings could improve predictions of rain and snow conditions two to six hours into the future – making airports more efficient and reducing cancellations.

Prof Moisseev stumbled across the discovery after noticing curious spikes in precipitation in scans of the campus radar antenna of the University of Helsinki Kumpula.

Perched on a verdant hill just two-and-a-half miles from the city centre, it is the largest hub of natural sciences in Scandinavia.

The unnaturally straight, intense patches appeared against the background of lighter rain or snow.

What is more, they appeared to be tilting towards the nearby Helsinki-Vantaa airport.

Prof Moisseev said: “If you look at the radar data every day like I do, something interesting always happens.

“Surprisingly, there are always new things we cannot explain yet.”

Such supercooled liquid clouds are common in low and mid level layers.

Air pressure changes from passing aircraft can freeze them into ice crystals.

Air expands abruptly in the wake of wing and propeller tips causing a dramatic local drop in pressure and temperature, explained Prof Moisseev.

Inside a cloud of water already supercooled between -15 to -20 degrees Celsius (5 to -4 degrees Fahrenheit), the passing aircraft can drop this below -40C – making ice crystals.

These help freeze more droplets, setting off a chain reaction in a widening circle around the path of the plane.

When the crystals fall, they create holes or streaks of clear air in the cloud – sometimes opening a window of blue sky if the layer is thin.

Prof Moisseev said: “By analysing eleven years of weather radar observations in the Helsinki region, we have discovered airplanes landing in or departing from the Helsinki‐Vantaa airport could locally increase precipitation rate by as much as fourteen times.”

He added: “The observed phenomenon is related to the hole‐punch clouds, which are also forming with the help of airplanes.”

Dr Andrew Heymsfield, of the National Centre for Atmospheric Research’s Mesoscale and Microscale Meteorology Laboratory in Boulder, Colorado, who was not involved in the study, had previously noted the potential for more rain and snow at airports. 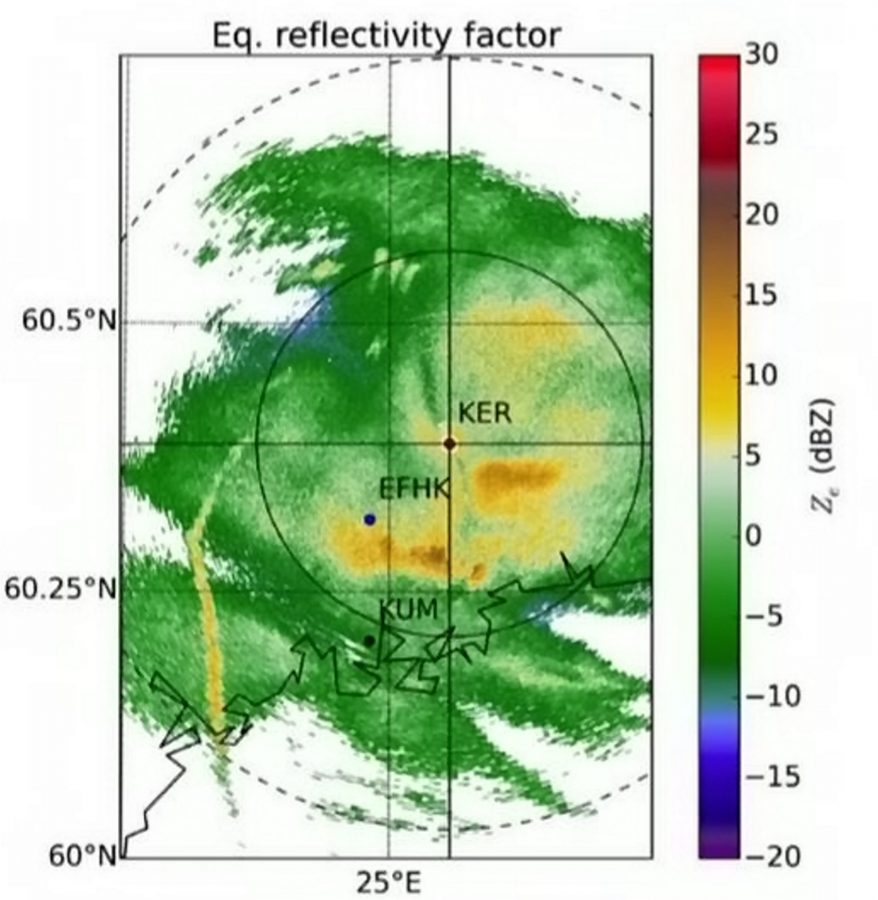 But Prof Moisseev’s international team’s study published in the Journal of Geophysical Research: Atmospheres is the first to describe the process in detail.

“The authors of this study have a lot of cases, with wonderful data from ground-based instruments – radar, lidar – good information about particle size and concentration, and radiosonde data to show the likely temperature for formation.

“They succeeded in documenting the phenomenon.”

Prof Moisseev and colleagues reviewed eleven years of the University of Helsinki’s weather radar data and found 17 days with repeat cases of the characteristic rain and snow bursts between December 2008 and January 2018.

Flightpaths near the airport archived to 2011 confirmed aircraft passed within one and six miles (2 to 10 kilometres) of the intense precipitation in most incidents.

Prof Moisseev said: “The intensified precipitation basically follows the track of an airplane above the cloud.

“It could extend over hundreds of kilometres, but the cross-section would be maybe 100 metres.

“So it is a very narrow, long feature.”

The additional ice crystals raise the rate at which they collide to form larger flakes – intensifying snowfall, said the researchers.

This could happen if a jet flies directly through a dark cloud.

Something more complicated is also probably going on, because the data locates the increase starting far above the layer that is already raining or snowing.

The airplane-generated ice crystals most likely fall from a supercooled upper cloud layer into one that is already raining or snowing below – fuelling even more.

Satellite data support this scenario, showing a top layer of clouds composed of supercool droplets or a mix of ice and water, poised at about the right temperature to turn to ice crystals under the influence of aircraft.

This upper, supercool layer floats at the typical approach altitude of planes flying into the Helsinki-Vantaa airport.