Lisa Godfrey, 51, faced one count of criminal damage after the 'fracas' outside her sister Dawn Bodimeade's £750,000 house in Ruislip, west London

by SWNS
in Automotive, Must Reads, Tech and Auto 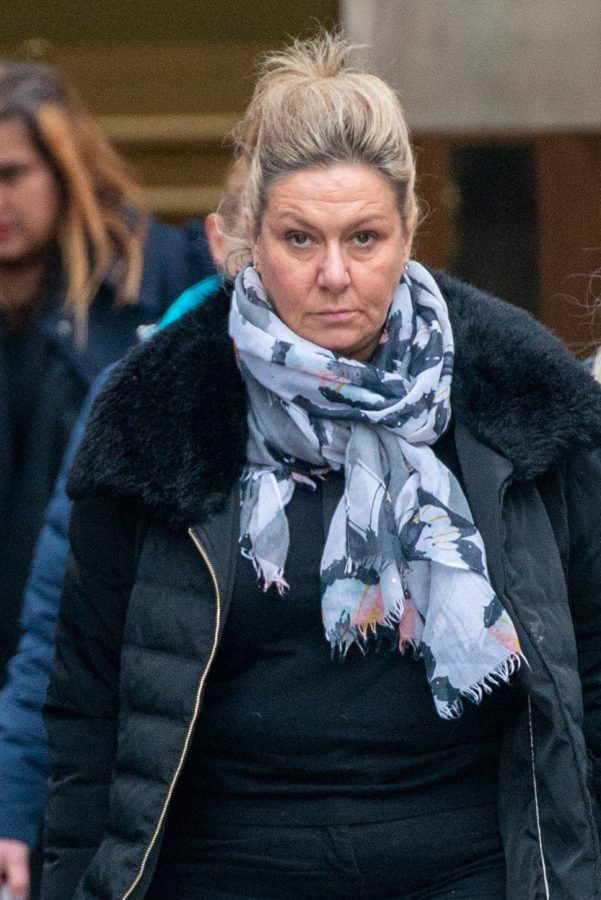 A millionaire found herself in court after throwing a road sign at a Range Rover when she rushed to her sister’s aid during her messy divorce battle.

Lisa Godfrey, 51, faced one count of criminal damage after the ‘fracas’ outside her sister Dawn Bodimeade’s £750,000 house in Ruislip, west London.

She had driven from the £2m home she shares with her trader husband after Dawn’s ex had arrived with his new girlfriend to clear the former marital home.

Dawn called her sister from hospital where she had an appointment after her son had rung to say that his dad and girlfriend had locked him in the house after changing the locks.

The row began when Mr Bodimeade arrived with a court order on May 1 to clear the house so it could be sold for the divorce settlement.

But it ended with Godfrey throwing the circular traffic sign at the windscreen of Miss Mildenstein’s 4×4 and police arriving.

Ealing Magistrates’ Court heard Miss Mildenstein was ‘sh*tting herself’ when she was approached by Godfrey and sister Dawn outside the house which Dawn had been living in with her two children from the 28-year marriage.

Mrs Godfrey said she threw the road sign at Miss Mildenstein’s car in self defence because she thought she and her sister were going to be run over by the blue Range Rover as they stood outside on the corner of a nearby road by some road works.

A judge acquitted Godfrey of criminal damage totalling £2,287.80 because he ‘could not be sure of what happened’ that afternoon.

The court heard Ms Mildenstein was driving up and down the residential road after the row looking for Mr Bodimeade after he was ‘dragged’ out of the passenger seat by his estranged wife.

But her account was disputed by Godfrey and her younger sister who said she had been driving up and down the road ‘at speed’ to intimidate and scare them.

In her evidence, Godfrey said: “I was at my home address in Gerrads Cross and the phone rang. I answered and it was my sister and she said ‘Lisa is there any way you could go over to my house, Kai’s there and Martin has come with his girlfriend and they have locked him inside of the house.’

“I immediately grabbed my car keys. When I got there my nephew opened the window and said he couldn’t get out.

“We were in a conversation through the window, then this big car came up. Stephanie Mildenstein was driving and Martin got out the passenger side and he had a piece of paper.

“He said the ‘court has given me an order to clean the house to prepare it for sale and I have changed the locks’.”

Godfrey said her sister’s divorce battle had been ‘bitter’ after Bodimeade left her sister five years ago and had not had contact with the family since.

She said: “His girlfriend started to shout out of the car window at us as we were speaking. She shouted ‘Martin don’t f*cking speak to her’. I suggested we speak around the side of the house.

“She then said to him ‘you are not going anywhere with that f*cking c**t’. No-one else was shouting.

“But then I saw the car was loaded up with stuff and I asked what all of it was doing in there.

“At that point my nephew said ‘you have taken my brand new dog bed I bought yesterday and a bottle of vodka’. Martin went to the car which Stephanie had moved down the road and he returned shortly afterwards – bringing them with him.”

Dawn Bodimeade was then said to have arrived on the street and approached the Range Rover, by which time Mr Bodimeade had returned to the passenger seat.

Miss Mildenstein told the court her partner was ‘dragged out of the car’ by his ‘screaming and shouting’ estranged wife.

She then sped off down the road leaving him behind, the court heard, because she was afraid Mrs Godfrey and her stepson would also drag her out of the car as they ran towards them.

Miss Mildenstein said: “I was thinking, ‘oh my god they are going to drag me out of the car’ so I just drove off up the road.

“Lisa Godfrey is then coming towards me, shaking her head looking really menacing. She has come up to the car shouting. So I call the police.

“She’s climbed up the car, bashing the car with her fists on the bonnet. At that point she came up to the grille.

“She’s just shouting obscenities. I have never seen anything like it. It

“All I can think is ‘Christ, they are going to rip me out next’. She was looking at me through the window and she looked mental to be honest.

“She came up off the bonnet and she was leaning against it as if to say ‘I’m not moving.’ At this point Dawn Bodimeade is coming down the road.

“I took my foot off the brake really slowly and it nudges her. Just to say ‘back off’, then she has moved.”

But Mrs Godfrey told the court she had approached the car because she believed her former brother-in-law had gotten out of the car and pushed Ms Bodimeade to the floor.

After driving back up the road and turning because of a dead end, Miss Mildenstein again saw the two sisters standing on the corner of a pavement with their back to some gas roadworks.

Miss Mildenstein said: “As I go back up the road I see Lisa coming toward me with a great big plastic sign. It was like a big flat plastic heavy sign.

“Either side of the road they have dug up a trench because they are laying cables. Either side is all bollards and a big trench. She’s walking in the middle of the road, and I’m thinking ‘this woman is crazy’.

“She was holding it and going ‘yeah, yeah’ and shaking her head. She looked mental. So then I thought ‘sh*t’. I tried to reverse but there’s now three cars behind me because everyone’s coming home from work.

“So I can’t go back. I managed to go around her. She’s carrying the sign and as I have got up level to go around she has just thrown it and it has hit the passenger side, the left side lower corner of the windscreen. I was in shock actually.

“I couldn’t believe it was happening and in broad daylight as well as in a residential street.

In her defence Godfrey said: “We were standing on the opposite side of the road, we thought we were safe there. Then we heard the car coming and it was coming faster, doing zig-zags.

“She used someone’s dropped curb to go up the pavement so she had two wheels on the pavement and two on the road.

“When it got really close to me there was a sign to show pedestrians the path was closed.

“I picked the sign up, thinking if she sees me pick it up she will stop. I actually thought she was going to kill me.

“I’m only five-foot-two, I could only pick it up to my chest. I just dropped it. It was very close to us.

“I had nowhere to run to because of the road works and when she was a short distance from us. As far as I’m concerned that car was no different from her coming at me with a gun.”

Asked if she told an emergency call handler that she was going to ‘run those c*nts over’, Miss Mildenstein said “I probably did say that. I was really angry.”

District Judge Kwame Inyundo said: “My decision is that this unhappy situation has arisen out of an unhappy family break up. In those circumstances emotions are heightened, feelings are amplified. People behave in ways people would not ordinarily.

“The high standard the prosecution have to have met has not been made in this case. I’m not sure what happened.”

Godfrey, of Gerralds Cross, Bucks, was acquitted of one count of criminal damage.