Outlandish aesthetics, a naturally aspirated V12 and mind boggling speed, the Lamborghini Aventador S is every inch a supercar 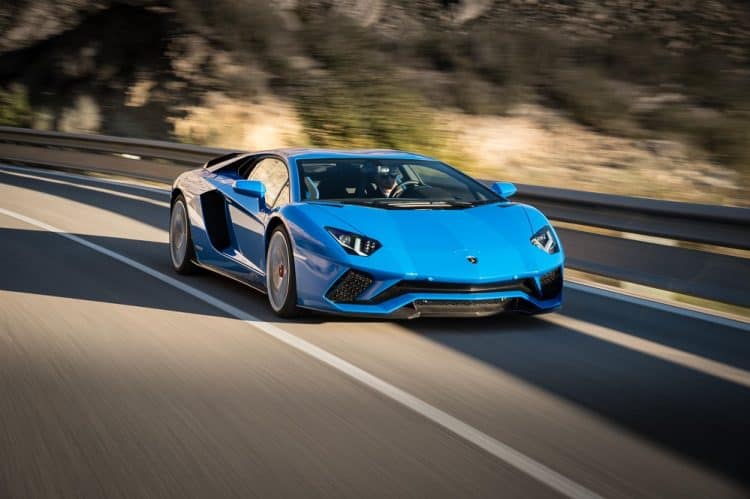 “Do not go gentle into that good night. Rage, rage against the dying of the light.” Dylan Thomas wasn’t writing about the impending demise of the internal combustion engine, but the Lamborghini Aventador S is the automotive embodiment of his sentiment. This is not a car, not a manufacturer, that is accepting the death penalty imposed on engines such as its masterful V12 on anything but its own terms. Slide away quietly? No chance. Nothing assaults the senses quite like it.

The Lamborghini Aventador S is something of a supercar checklist. The looks are unlike anything else on the road. It has presence in spades thanks to its wide gait and low ride height. It’s stunningly impractical. It’s blindingly fast. The engine, oh the engine, is a masterpiece. A 6.5-litre naturally aspirated V12, its symphony is enough to justify this car on its own.

It doesn’t just sound great, though. 730bhp is sufficient to tick off 0-60mph in 2.8secs. It’ll reach 100mph faster than most sports cars will hit 60. Plant the right foot at any speed and the acceleration is exhilarating. The V12 bursts into life with an almighty roar before kicking you down the road at the speed of light. It’s not something you’d ever get bored of doing. This isn’t a car you’d ever get bored of. Annoyed at? From time to time. Bored of? Never.

Not every stretch of road facilitates the sweet song of the Lamborghini Aventador S. I was thrown in at the deep end. Collecting the car from Lamborghini’s servicing centre in North Acton, my first experience was crawling through west London traffic to Richmond. There’s no getting away from the fact that this is a big, imposing car. Visibility out of it isn’t amazing for urban conditions. The blind spots are massive, leaving you to say a few prayers when changing lane.

After a couple of miles, however, I settled into the car. There’s nothing outright intimidating about it. The steering is light enough, the seats are comfortable, you can just about see things behind you in the rear-view mirror and the ride quality is surprisingly good.

There are three drive settings; strada, sport and corsa, plus ego which lets you mix and match to your tastes. On the road, strada slackens things off a fair bit. It’s not like driving a Bentley, but you can manage speed bumps and potholes without fearing that the car will break. For everyday driving, strada is the go-to choice. The gear changes are also lot a more forgiving. Get it into corsa and the single clutch box will try and break your neck. It’s hilariously violent.

After half an hour the Lamborghini Aventador S seemed to have shrunk around me. It no longer felt too wide and here it was, later in the day, winding through slow moving traffic with aplomb. The only thing that kept me aware of what I was driving was everyone staring at me. Well, staring at the car at least.

But what’s the Lamborghini Aventador S really like to drive?

Okay, so you’re unlikely to buy a Lamborghini Aventador S to get yourself to work and back every day. The petrol consumption alone would put paid to that. I think I managed 13mpg during my time with it. In traffic, the petrol gage moves faster than the speedo.

What you will use the Lamborghini Aventador S for, however, is thrills and spills. Find an open road and you don’t just forget about the shortcomings of the car; you forget about the whole world. It’s like a teleportation device to another dimension in which only you and it exist.

It’s a remarkable car. The acceleration is brutal and threading it along a decent B-road reveals extraordinary poise and traction. There’s zero body roll and oodles of grip. You really don’t have to be a brilliant driver to simply enjoy the Lamborghini Aventador S. The power is mind boggling and you absolutely have to be a brilliant driver to explore the limits of this car, but enjoying it is easy.

The steering is sharp and precise, with the wheel constantly alive in your hands. You get a good feel for the engine through your right foot and the pedals are brilliant to modulate. Each centimetre of carry draws a response from both accelerator and brakes. Whilst the single clutch gearbox can’t really compete with others in terms of sophistication, it undoubtedly adds to the drama and is responsive to your requests. There’s something visceral about the neck snapping shifts that keeps you coming back for more.

The four-wheel drive and four-wheel steering setup add agility to the mix. With that V12 sitting behind you and the car alive in your hands, it’s an all-consuming, exhausting experience in the most wonderful of ways.

So, what are the drawbacks to the Lamborghini Aventador S?

As mentioned, the fuel consumption is wild. There’s no cylinder deactivation. You’ll also wake up everyone on your street when you start it up first thing. But, if you can afford one, you probably don’t live on a street.

The pedals are too far over to the left. The accelerator is where the brake should be and the brake where a clutch would go in a manual. There’s no storage space in the car and nowhere to rest your right arm when driving. Infotainment isn’t a strong point, either, with no touchscreen, no high-res and an awfully fiddly system to navigate. Bizarrely, it has an excellent stereo, but it’s so loud in the cabin that you can’t hear its detail. At night, the light that illuminates the door handles is so bright that you can’t see anything else other than it. I had to put my coat over it or ask the passenger to sit in such a way that they obstructed it. The seatbelts can’t be adjusted and they’re too low for anyone over 5ft tall, so they slip off all the time.

But you know what? I don’t care. No one cares. Who on earth buys a Lamborghini Aventador S on the strength of the infotainment and how practical it is? Not a single soul. A quick squeeze of the right foot, the rumble of the V12 and the fact you’ll be at the horizon in just a moment fades all of this into insignificance.

The Lamborghini Aventador S is an intoxicating machine. It’s laser focussed on performance to the point that it might just be more substance than style. And there isn’t exactly a shortage of style here. Nothing I’ve driven has turned heads quite like it. People wanted photos beside it at petrol stations (there were a lot of petrol stations) and people were snapping photos on the motorway. The appeal is unquestionable.

It looks the part and is every inch a supercar. There’s an outlandish, almost mythical presence to it. Yet it’s surprisingly pliant, too. You can get over speedbumps and park it easily. I really wasn’t expecting it to be so accessible. Ingress and egress are also easier than anticipated via the scissor doors.

It’s impossible not to get drawn in by the Lamborghini Aventador S. From the first moment you lock eyes on it, to every time you flick open the starter switch and eagerly anticipate the start-up of that naturally aspirated V12, this is a special car. It’s wasted crawling round central London but find an open road and it makes your soul sing. The engine is superb, then there’s the handling and the steering. Aesthetically its entirely unique.

You have to find the right conditions for it, rather than it bending itself to your will, but do that and it’s such a rewarding car. There’s a wonderful throwback element to the whole experience. It requires fierce concentration and complete driver involvement. Naturally aspirated V12s, too, won’t be around for much longer. If this is the endgame for such engines, the Lamborghini Aventador S is raging against the dying of the light.