Residents today slammed ex-Top Gear star Jeremy Clarkson and his two co-presenters for ‘causing chaos’ in a quaint Yorkshire village during filming of the Grand Tour. Householders say they were forced to take a 10 mile detour from one side of their village to the other after TV and security staff closed off all local […] 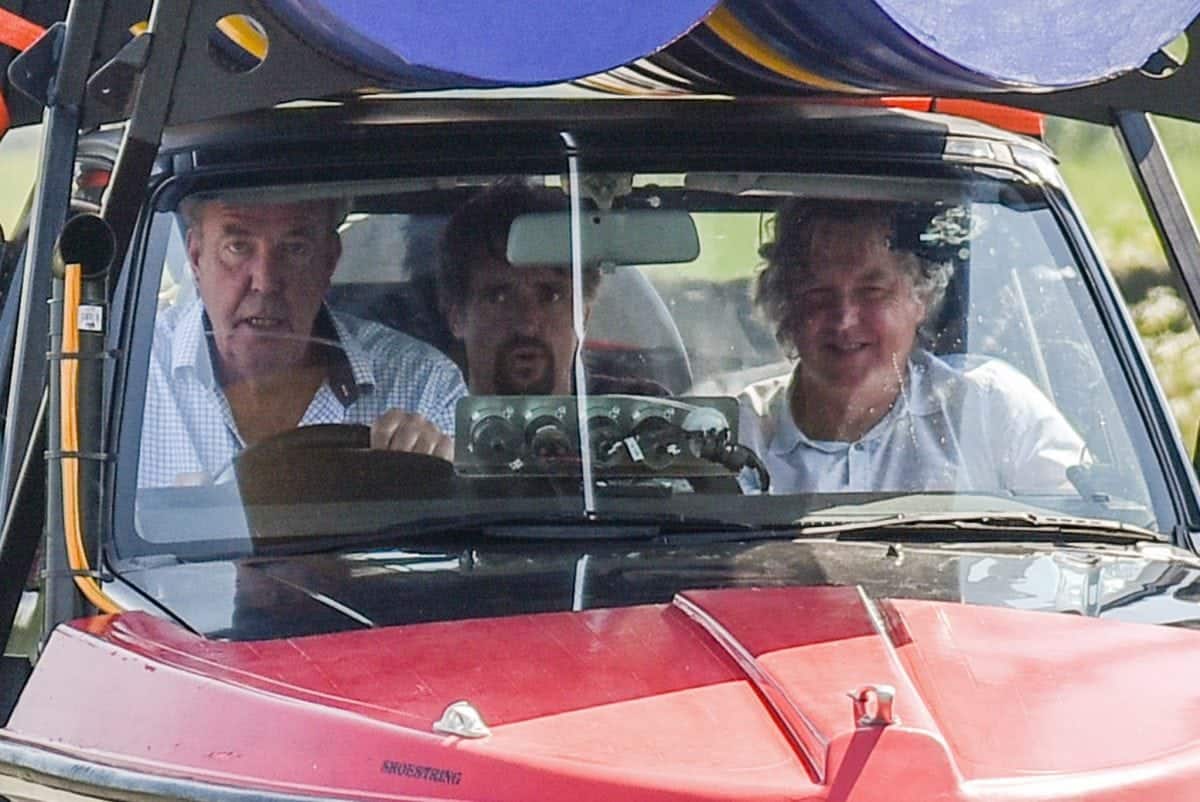 Jeremy Clarkson, accompanied by co-presenters Richard Hammond (in the back seat) and James May (in the front passenger seat), drives an odd vehicle in the outskirts of Huddersfield, West Yorks., May 25 2017. The car appears to be part boat, part car, and part jet engine, and filming has severly disrupted residents in the local village. See Ross Parry story RPYTOUR:

Residents today slammed ex-Top Gear star Jeremy Clarkson and his two co-presenters for ‘causing chaos’ in a quaint Yorkshire village during filming of the Grand Tour.

Householders say they were forced to take a 10 mile detour from one side of their village to the other after TV and security staff closed off all local roads without notice.

Clarkson, Richard Hammond and James May and their TV crew descended on the quaint village of Farnley Tyas, near Huddersfield, West Yorks, on Wednesday.

The outspoken trio were then filmed the following day driving along local lanes inside a black Toyota Hilux which had been fitted with a jet-engine and adapted to look like a boat.

But residents say filming on both days virtually shut down the entire hilltop village, disrupting local businesses and causing confusion for local motorists.

They accused TV staff of closing off the main road into the village between noon and 5pm on Wednesday with staff also stopping people from driving on key feeder roads.

Locals claim they weren’t given any forewarning about the closures which meant motorists were faced with a 10-mile detour around Farnley Tyas. Charles Rapley, 73, slammed productions chiefs and the local council over claims villagers were kept in the dark about filming.

The retired commercial construction manager, who rents a stable at a local livery yard, claimed he along with 20 other horse riders lost out on business on Wednesday.

He said: “The livery yard is around 200 yards away from where they closed the road which prevented us from going about our normal business.

“They were filming the Grand Tour there. The road closure allowed them yesterday and today (thurs). It’s usual total chaos and mismanagement.

“It basically means anyone wanting to come from one side of the village to the other has to take a 10-mile detour – it’s not practical and we should not have to do it.

“It has caused considerable disruption to people moving about from one side to the other.

“I understand the council did inform the local school, to me it’s the production company that should put notices up or let everyone know.

“I don’t care if they are worried about fans turning up, it has disrupted my business and I will be writing to them {producers} in that vein – it has caused a lot of people an expense.

“We need to move horses and a lot of people who are trying to get in and out are having great difficulty.

“Why have Kirklees allowed this without notifying local residents?” He added: “I saw a very strange looking vehicle at the end of the road, it was only travelling around 20mph.

“It looked abit like a pickup truck and has been converted, with a jet engine on the back and the front looked like the front of a rowing boat.”

TV presenters were spotted in Farnley Tyas on Wednesday and at Crosland Moor airfield on Thursday as fans flocked to see the famous faces filming their show.

Mr Rapley said he had contacted Kirklees Council and Clarkson’s filming company Chump Productions, but not got anywhere.

He said Kirklees told him road closure orders had been issued and there was nothing they could do.

A spokesman for Kirklees Council said: “The council carries out statutory procedures to temporarily closure roads to enable activities such as roadworks, events or filming to take place by third parties.

“Where possible diversions are specified which would be suitable for all types of traffic using the roads.

“The third party is responsible for any traffic management and signing for the temporary road closure.”

The former stars of Top Gear are thought to have been filming an episode of their new show The Grand Tour, which airs on internet station Amazon Prime.