Allowing players to touch as well as see the action has been a problem that gaming technology has failed to properly overcome. 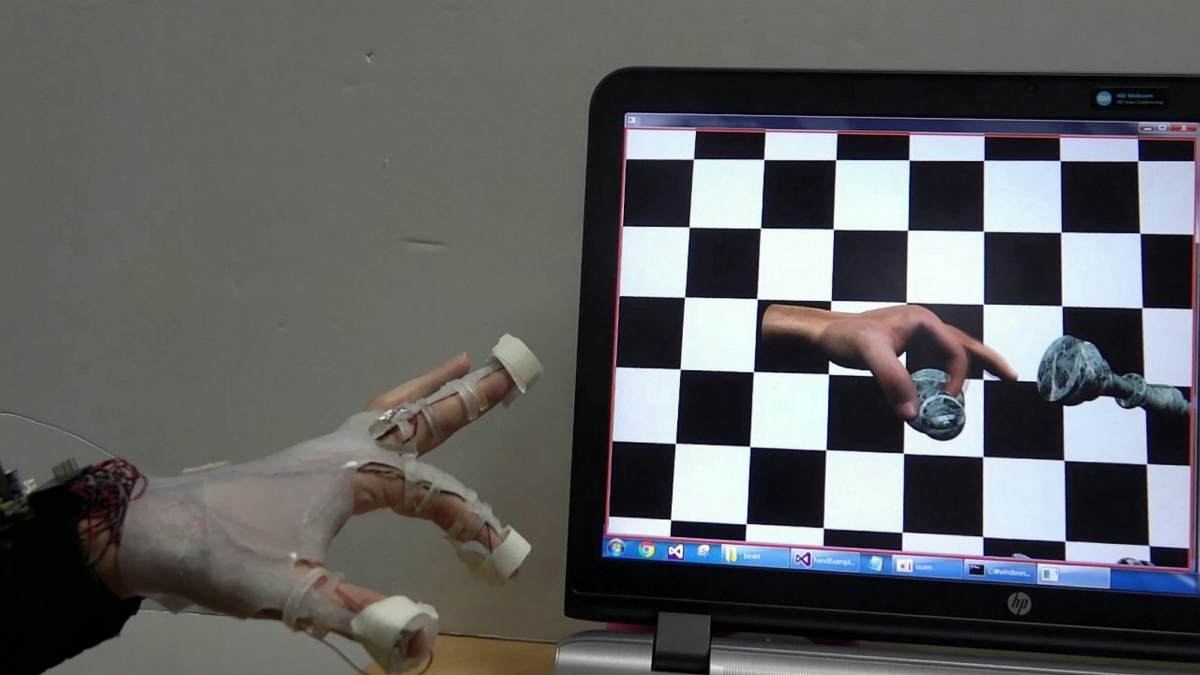 A glove that lets you to ‘feel’ virtual reality objects as if they were the real thing is set to revolutionise gaming.

Allowing players to touch as well as see the action has been a problem that gaming technology has failed to properly overcome.

Now scientists reckon they have come up with a solution, a fine and lightweight mitt made from silicone so the hand experiences pressure rather than a vibration.

Wearers interpret the size and shape of an entity – even though it is a computer generated simulation.

The device which has sensors on the thumb, index and middle fingers, can imitate the physical sensation of handling, prodding or stroking a host of different materials.

The mind boggles at some of the things it may be used for – from games and surgery to boosting the experience of recreated ancient civilisations.

Corresponding author Dr Youngsu Cha said: “There are many gloves for virtual reality. However, their feedback is based on vibration. Mine is based on pressing

He explained: “For example, when a user grabs a virtual object, while conventional ones give vibration feedback, the proposed device pushes the skin of the finger tip.

“It is close to the real situation. Also, there are some gloves with pressure feedback. But their actuators are motorised and have a rigid structure. So, they are bulky and heavy.”

These work by using sensors, which detect the wearer’s movements, and actuators, which provide physical feedback via mechanical stimuli such as vibration.

Dr Cha said: “Although previously developed actuators were able to accurately reproduce the texture of virtual objects, they could not provide information about their shape.

“Ours is lightweight – enabling the wearer to feel the actual shape of an array of virtual objects.”

Dr Cha, of the Korea Institute of Science and Technology, Seoul, says it should be on the high street “within a few years.”

The device described in Scientific Reports uses a system that allows the wearer to manipulate a virtual hand, pick up an object in virtual reality and feel its shape.

As the person moves their hand to collect it the finger movements are detected by sensors in the glove.

Dr Cha released a video and images of experiments in which the glove was successfully tested on one of the eight team members as they picked up a virtual reality chess knight, or horse.

Data from the sensors are transferred via Bluetooth to a software programme that recreates corresponding movements of the virtual hand on a screen.

Taking hold of the virtual object triggers switches, or actuators, made out of a soft and lightweight form of silicone developed by Dr Cha and colleagues.

The switches receive a signal from the simulated environment which causes air inside them to move – and expand the silicone in their centre.

Dr Cha said: “When the virtual finger touches the virtual object, the actuators are activated and give the tactile feedback to the real fingertip.

“The glove is made of silicone rubber material and integrated with the sensors and actuators such that users can wear them conveniently with light weight.

The user’s fingertips sense the pressure of the expanded silicone as if they were touching the virtual object.

Dr Cha said: “This allows them to feel its shape, pick it up and hold it in virtual reality.”

The system can be operated without bulky external air compressors that were needed for previous devices, he said.

Added Dr Cha: “It may be used in different virtual reality environments by linking it with different software.”