Volkswagen sends clear message to the market with futuristic new showroom Car production in the UK remains on course to hit an all-time record by 2020, after official figures revealed 10.3% more cars were made in the first three months of 2016 compared to last year. As growth in the UK car manufacturing shows no sign […]

by Sarah Smith
in Automotive, Business 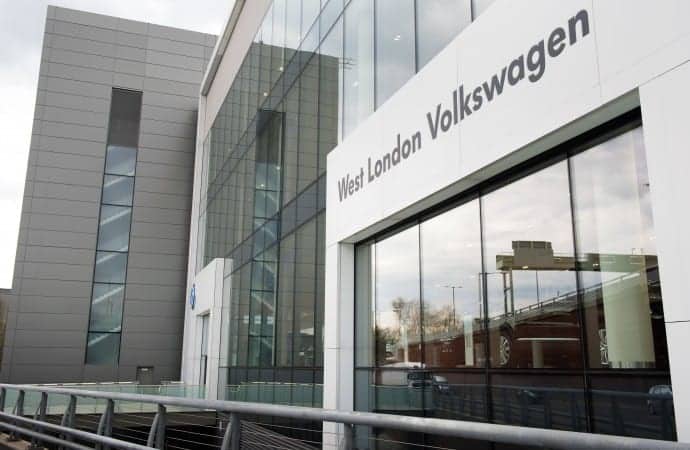 Car production in the UK remains on course to hit an all-time record by 2020, after official figures revealed 10.3% more cars were made in the first three months of 2016 compared to last year.

As growth in the UK car manufacturing shows no sign of slowing, 443,581 cars were produced up to the end of March, equating to around one UK-built car being manufactured every 16 seconds.

Reflecting the rising production and demand, Volkswagen (Inchcape) have invested in a state-of-the-art showroom in West London, which will be VW’s largest UK showroom to date.

The showroom has space for 90 new and used cars over four floors. located just off the A4 on Capital Interchange Way, Brentford.  It will employ 70 staff covering sales, after sales, service and repair services.

Director of Volkswagen UK, Alex Smith, said: “West London Volkswagen sends a very clear message that the brand here in the UK is continuing to gear up for growth.

“Opening the largest Volkswagen Retailer site in the country in such a high profile location, with the support of Inchcape, is not only good news for customers in that area who will now have a state-of-the-art facility on their doorstep, it also points to the ongoing strength of Volkswagen in the UK.”

The purpose-built showroom has an eye-catching vertical garden that sits near the customer entrance. The 230sq-m ‘living wall’ is irrigated using on-site rainwater collection. In addition the building hosts solar panels to offset a proportion of the energy consumption.

Built on a 1.6-acre site to the west of central London, the facility boasts a number of 140-inch video walls, which allow sales staff to project images directly onto the big screen. It also has a state-of-the-art service area with 28 service bays all equipped with high tech diagnostic and servicing equipment.