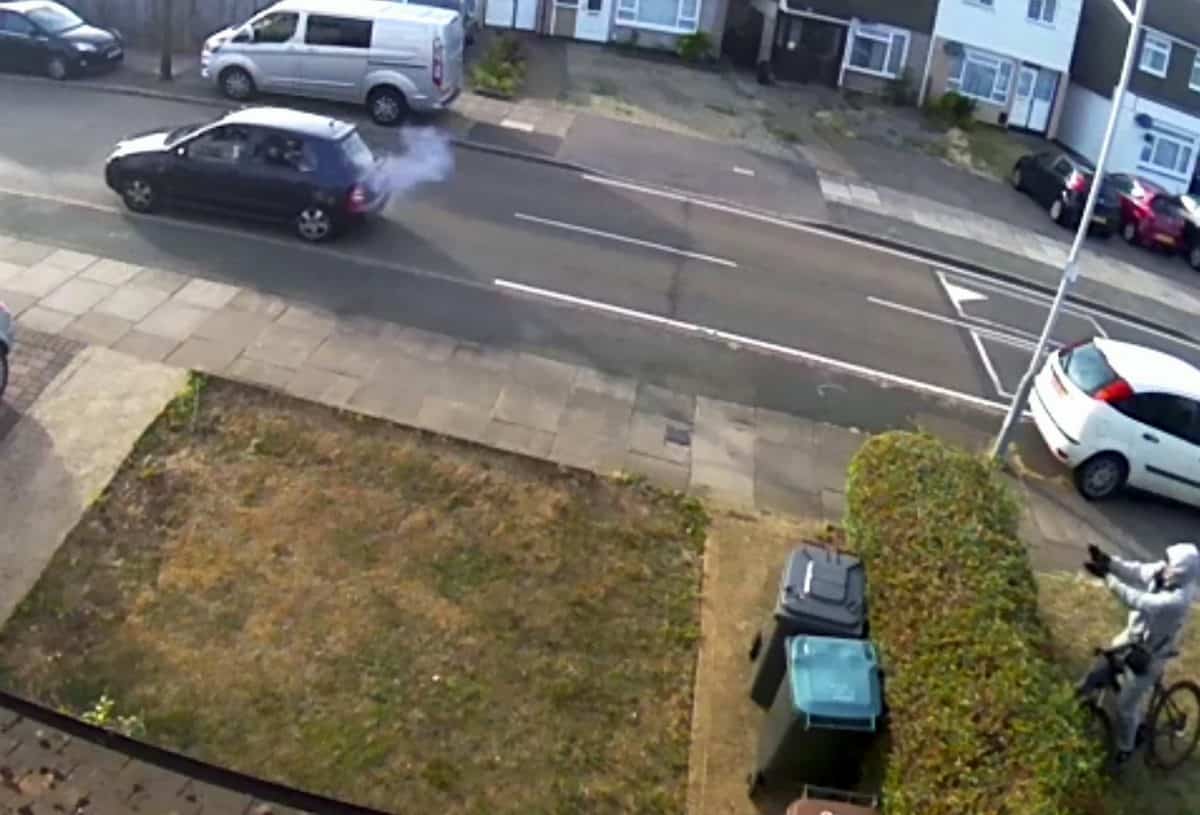 This shocking footage shows a ‘Wild West’ style shoot out on a suburb street between a gang in a Skoda and a rival member on a bike.

CCTV captures the car being driven erratically with five youths inside after chasing down Reanae Charlery, 21 on a bicycle.

Two shotgun blasts were fired out of the car’s rear window at the youth on the bicycle by an unidentified gang member – before Charley waves a gun back at them.

But one of the shots landed into a family home where children were present.

The gun has never been recovered.

CCTV captured Ali in the front seat of a Skoda driven by his accomplice Kevin Raveendrakumar, 19, with three unidentified gang members in the back.

The Skoda first appeared in the Hockwell Ring suburb of Luton and chased after a young man on a bicycle believed to be involved with a rival gang.

Afterwards, Ali and two others – one of whom was armed with a six to eight-inch knife – leapt from the Skoda and chased another rival gang member Charlery.

The trio then got back into the Skoda and the two shotgun bullets were then fired by an unidentified gang member.

Ali appeared at Luton Crown Court on Thursday, February 21, where he was also sentenced for an armed robbery on Marsh Road on February 18, 2017, in which he held a knife to the victim’s neck while stealing his designer goods including an Armani baseball cap, Armani shoulder bag and a Hublot watch, with another accomplice.

Kevin Raveendrakumar, of Lamorna Close, Luton, also appeared in court on February 21 and was jailed for three years for his part in the disorder.

Raveendrakumar had been caught by police the morning after the incident while in the back seat of his Skoda, where gun residue was found.

The court was told he had recently completed an apprenticeship and had a stable, supportive family, who had attended court each day.

Charlery, of St Vincent Gardens, Luton, appeared at court on Wednesday (March 6) and was sentenced to a total of four years and three months’ imprisonment for possession of an imitation firearm, as well as a separate drugs charge.

“With this incident taking place in broad daylight, these three individuals clearly had no regard for the safety of the public, which is incredibly concerning.”

She added: “This incident was seemingly planned, with guns being carried to either be used as intimidation or to cause serious harm.”