Middle-aged Martin Skinner hit the tree so hard in his Porsche 911 GT3 while showing off that the entire engine flew out of the back of the £140,000 motor. 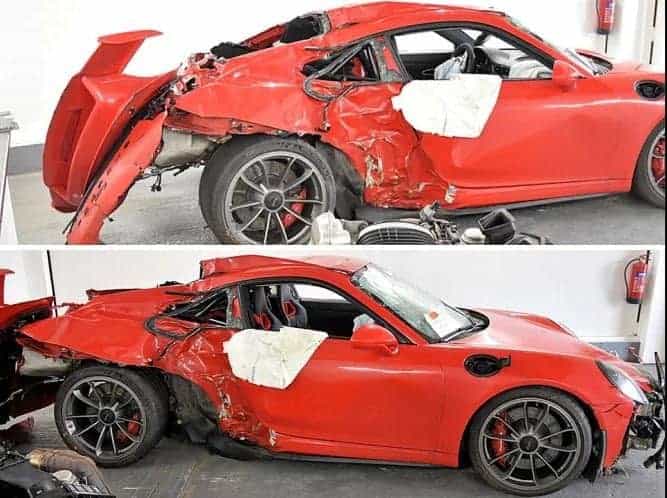 A flash property developer lost control of his Porsche and ploughed into a tree so hard it left his passenger with brain injuries after getting behind the wheel while high on cocaine.

Middle-aged Martin Skinner hit the tree so hard in his Porsche 911 GT3 that the entire engine flew out of the back of the £140,000 motor.

ASkinner, 40, was jailed at Worthing Magistrates Court on Wednesday for 22 months for careless driving as well as for failing to provide a specimen.

The Mayfair-based asset management firm boss showed up at court two hours late, driving a McLaren supercar, and tried claiming his alarm clock hadn’t got off.

Skinner had initially tried to blame the road surface for the crash, but he changed his pleas to guilty at the last moment.

The judge declined to give Skinner, whom she described as ‘arrogant’, any credit for his guilty plea, and banned him from driving until May 2022.

Sussex Police Investigating officer Tony Crisp said: “While Skinner did not set out to cause an accident that day, he had clearly set out to drive around the countryside in a high powered car, at high speed, and under the influence of cocaine, resulting in a crash that caused the victim in this case to sustain a life-changing injury.

“He sought to prevent the police from taking a blood sample to establish how much cocaine he had in his system and until the very last moment refused to accept responsibility for his actions.

“Cocaine is a Class A drug, and can have the effect of impairing a person’s ability to drive safely. Surrey Police and Sussex Police are committed to both educating drivers not to drive under the influence of drugs or alcohol, and to catching and convicting those who intentionally put other road users’ lives at risk by doing so.”

Skinner, of Belgravia, west London, was showing off to his passenger when he crashed his car on the A281 in Rudgwick, West Sussex on the evening of August 24 last year.

His passenger, a 30-year-old woman from London, sustained serious injuries which included brain injuries, and was flown to King’s College Hospital in London where she remained in an induced coma for more than a week.

She told a court that she had begged him to stop driving so fast in the windy roads.

He was taken to Guildford Hospital with serious injuries, where he refused to provide a further sample for the police investigation.

Investigators said Skinner had decided to ‘go rallying’ to a business acquaintance’s house in Rudgwick after his friends refused to take part in a super car road trip to France on the morning of the crash,

Later that evening Skinner had persuaded his passenger to come with him in his Porsche to direct him to a local shop and crashed on the way there in the rain.

Skinner was subsequently charged with careless driving and failing to provide a specimen for analysis.

He pleaded not guilty to the charges claiming the road surface was “defective” and he was not fit enough to give his consent to giving a specimen to police at the time.

His passenger, still recovering from her life-changing injuries, told the court that Skinner had been driving so fast that everything had been a blur.

She said she had asked him to slow down, and warned him that the road was winding, but that he had ignored her pleas and had negotiated a bend so fast that he had ended up losing control and crashing.

He was charged with failing to surrender to bail and following legal advice pleaded guilty to all charges.