Isabelle McKay-Smith, 34, said her daughter Eliza wanted "everyone in Sheffield" to read her message encouraging people to "try to be happy". 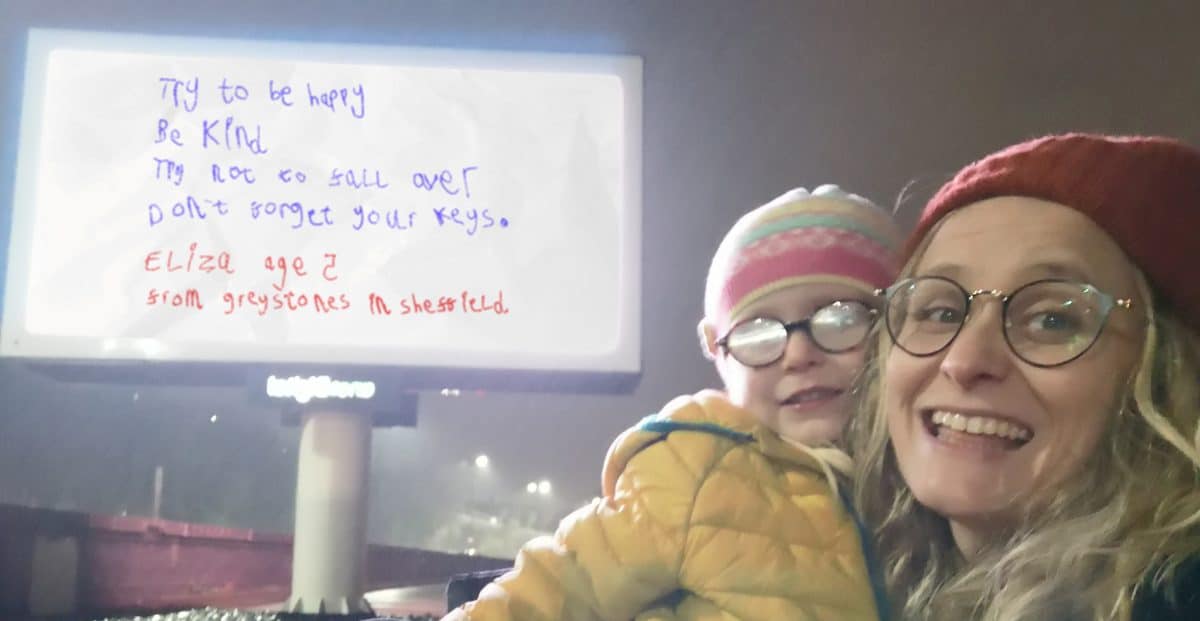 A mum given a note from her daughter urging people to “be kind” arranged for it be displayed in her handwriting – on a roadside billboard.

Isabelle McKay-Smith, 34, said Eliza handed her the written message because she wanted people to “try to be happy”.

The proud mum said Eliza loves encouraging people and wanted to spread a message of joy and kindness.

Isabelle of Sheffield, asked her daughter if she could make a few copies and hand them out in the city centre.

But she got in touch with digital advertising agency CNS – who arranged for the message to feature on a billboard on the busiest road in their city.

The message, hand-written by Eliza, has been placed on a billboard on Sheffield Parkway, a 5.5-mile road that connects the city to the M1.

It reads: “Try to be happy. Be Kind. Try not to fall over. Don’t forget your keys.”

She signs off: “Eliza, age 5, from Greystones in Sheffield.”

“We go and cheer all the running events in Sheffield and she holds up signs telling the runners they’re smashing it.

“She puts up notes for the neighbours saying having a good day.

“We were having a conversation about being nice to each other and she was writing this note and said she wanted everyone in Sheffield to see the message.”

She added: “Children view the world in a really nice, innocent way.

“It’s just her nature to play nicely with others and to share and be generally kind.

“She just wants to be nice to everyone, every day.

“She is encouraged at school and church to spread the message of kindness and joy and that’s what she was doing.”

Isabelle said she hoped the message would raise a smile on motorists on their daily commute and that adults would take note of the advice.

She added: “There’s so much negativity around recently, it’s so nice to see a positive message for a change.

“I’m hugely proud of her, but I’m sure there are plenty of five-year-olds in the country having the same conversation with their parents about being kind.

“It’s just how she is and how children are in general.”

Eliza said: “I wanted to make a poster to go up in the middle of town where lots of people will see it, to make them happy and help them.

“In the email, she told them about how her daughter had created a poster design and her dream was to have this design showcased in Sheffield for everyone to see.

“As we’re all very aware, the past week has brought some tragic news and, in a time, where there’s a lot of darkness in the media, Eliza wanted to help spread some light by ‘cheering up the people of Sheffield’.

“CNS were so touched by Eliza’s message, they immediately got in touch with their partner Anco Digital, who within hours had her message up on their prime digital 48 sheet billboard on the Sheffield Parkway.”

The message, which has been up since Tuesday, will be in place into next week.