Footage shows the men swinging at each other along a busy Bristol street at 4:30pm on Wednesday 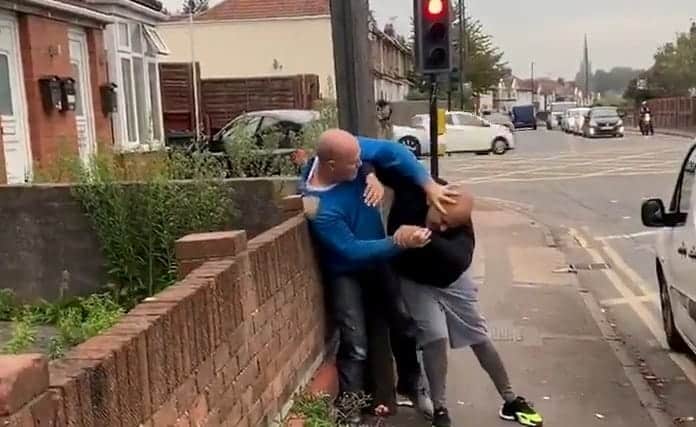 Two middle-aged motorists have been ridiculed over this ”pathetic” road rage fight – where they both spend several minutes grappling in the street.

The two drivers had pulled up in front of a traffic light and began throwing punches after reportedly being involved in a crash at a roundabout.

Footage shows the men swinging at each other along a busy Bristol street at 4:30pm on Wednesday.

At one point one of the men falls to his knees and is then pushed backwards by the second motorist.

They continue to grapple with one another along the road before an elderly pensioner and his dog emerge from a house to intervene.

The pair are said to have continued fighting for another minute before jumping back into their vehicles and driving off.

An eyewitness said: “It’s just such a pathetic fight.

“They start getting to grips with one another but it’s all very anti-climatic.

“They had been swearing at one another in their cars. I think one of them must have clipped the other at the roundabout.

“They drove down the road still f-ing and blinding then the traffic light turned red and they got out.

“I got my phone out because it’s one of those things that people just wouldn’t believe unless they saw it.

“Then when the old man gets out of his house – it’s just so funny.

“I think they only decided to call it a day because the traffic was really building up along the road.

“Hopefully they managed to get whatever it was off their chest. It’s just the most Bristol thing.”