Ben Williams, 34, was left stranded at the roadside when his "pride of joy" classic car he was driving broke down in the while he was on his way to a pub. 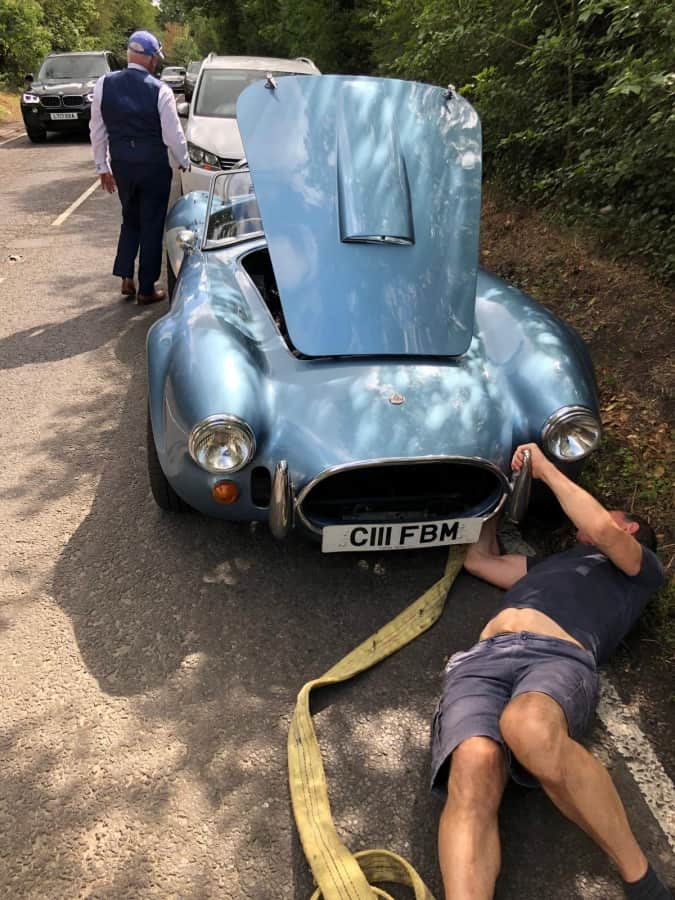 A groom who nearly missed his own wedding day when his classic car broke down as he drove to the venue was saved by police officers who offered him a tow.

Ben Williams, 34, was left stranded at the roadside when his “pride of joy” AC Cobra classic car broke down on his way to his wedding.

The husband-to-be had planned to go to the Coach and Horse pub for a pre-wedding pint before making his way to the wedding venue at Sparrows Hill in Essex.

Sparrows Hill is an equine rehabilitation, training and livery and has 20 acres of parkland.

He was due to marry his partner of five years, commercial interior designer, Chloe, 33, but when he was around four or five miles away, the car conked out.

With just an hour and a half to meet his best man and friends and then drive to the venue, he was concerned he would leave his wife-to-be waiting at the altar.

Luckily, two officers came to his rescue and made sure Ben made it to his wedding just in the nick of time by towing his car to a place of safety and ensuring he got a lift.

The drama began as Ben and his dad Nick were driving into Stansted, in Uttlesford, Essex.

Ben, who is a sourcing agent in the retail industry from Newport, Essex, said: “We were wanting to go to a pub near to the venue for a quick drink but as I was coming into Stansted it just conked out.

“I just couldn’t believe that this was happening! My first thought was initially my poor car!

“It was my dad’s car before mine and he passed it down to me so it’s kind of a family heirloom so I wanted to drive it to my wedding.

“I was then getting quite worried about getting there and there was this massive queue forming. Some of the cars had my wedding party in so my best man and usher pulled up behind us and stopped to see if they could help.”

With the panic beginning to rise, Ben called the AA as his wedding party desperately tried to revive the car on July 20.

But help came from an unlikely source when two police officers pulled up to help.

Ben, who has a one and half year old daughter called Martha, said: “Luckily my usher’s dad lived closed by and he came to help police hitch my car to the police car.”

The police then towed the car to the next safe stop while Ben jumped in with his wedding party.

He said:”We rushed off to the pub but we only managed to fit in one pint before we went to the venue.

“The police stayed with my car until the AA arrived.

“I didn’t tell my wife until we were down the aisle. I did speak to my father-in-law who said he couldn’t believe it!

“He did tell me before not drive to the wedding in that ‘bloody car!'”

“It ended up being a lovely day, we had a marquee wedding, we had a really amazing band and we all got very drunk!”

It was later revealed that the car, which has been in Ben’s family for 34 years, had suffered damage to its oil sump.

Chloe and Ben had known each other since they were 17 when Chloe worked in Ben’s local pub.

Ben explained: “I always fancied her but when we were 17 we went off to do our own thing. Chloe went to Uni and I worked as a chalet boy for a while.

“Nothing really came of it and then six or seven years later I got a new job and Chloe worked in the same shared office.

“I saw her walk past one day and I said: ‘What are you doing here?’ She said she worked here and I said I did too.

“She had a boyfriend at the time then a year later I had already left at that point but Chloe messaged me on Facebook asking whether I would take her for that drink I promised her. The rest is history!”

But it could have been a different story for the now-happily married couple if Ben missed his wedding day.

He has since praised PCSO Mike O’Donnell-Smith and PCSO Andy Wallis who rushed to his aid and hopes to thank them personally.

He added: “The police officers were absolutely amazing.

“I was ready to cry when we broke down but I managed to get there on time!”