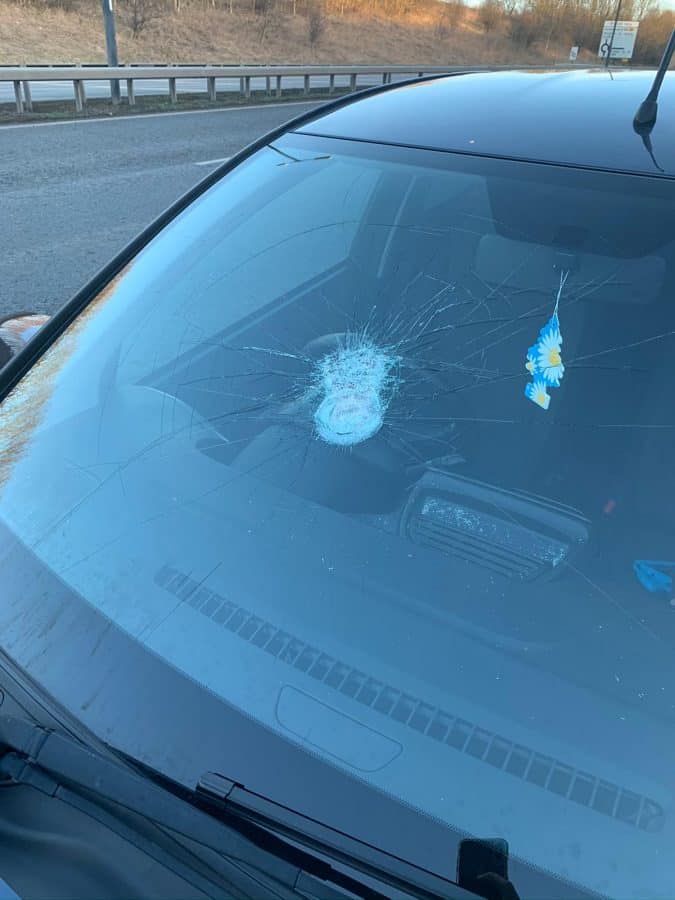 A father and his young son were almost killed when a brick was hurled through their car windscreen – by a boy aged SEVEN.

The young tearaway was showing off to pals when he lobbed a brick off a footbridge which landed on a car travelling at 60mph below.

The 30-year-old driver narrowly missed crashing and admitted he and his five-year-old son were lucky to escape uninjured following the incident on February 4.

He said: “It was frightening. I’d just finished work and picked my lad up from school when all of a sudden we heard an almighty crash with glass flying everywhere.

“Thankfully, no other cars were in the other lanes as I swerved, and when looking in my rear view mirror I could see a group of children running off the bridge.

“This could have resulted in serious injury, or much worse, and I hope other children and their parents read this and learn the lesson.

“This type of thing isn’t a game – it could be deadly.”

Police hunting the yob were stunned when they tracked down the culprit who attended a nearby primary school.

He admitted he was walking on the bridge over the A182 Washington Highway, in Sunderland, when he threw the missile to “entertain his friends.”

Inspector Nick Gjorven, of Northumbria Police, said: “This young lad may have been acting up in front of his friends shortly after school had finished and thought it would be clever to throw a brick off the bridge down onto the road.

“What he failed to consider was the potentially fatal consequences that his actions could have caused – frankly, it is sheer luck that nobody was killed.

“The driver involved had just picked his son up from school and was driving at 60mph on a busy road when his windscreen shattered, causing him to swerve.

“It quite easily could have come through the windscreen and caused catastrophic injuries to all inside the car.

“By throwing the brick, the boy did not only endanger the lives of those in the vehicle that it collided with, but every other road user who was in that area at the time.

“We have since identified the boy responsible and sat down with him and his family, along with their housing provider.

“He apologised for his actions straight away and knows what he did was wrong.”