Sarah McNee, 40, was driving in Gouttières when her black BMW 1 Series Convertible came off the road and ploughed through a brick wall 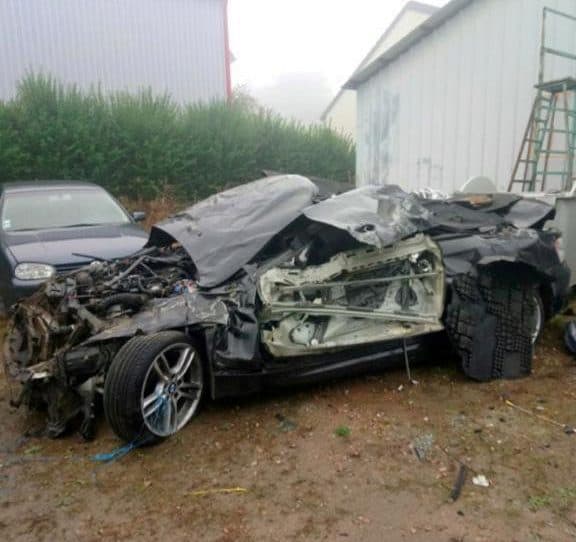 A British woman has been lying paralysed in a French hospital after a horrific crash left her car a mangled wreck.

Sarah McNee, 40, was driving in Gouttières when her black BMW 1 Series Convertible came off the road and ploughed through a brick wall.

After it took an hour for her to be cut from the wreckage, she was flown to hospital with severe brain damage. Her distraught family are now appealing for help to be able to visit Sarah, who can only communicate by blinking.

Sister Claire McNee said: “It’s totally devastated us. I cry every day just thinking about her lying there and the worry of it all.

The 41-year-old added: “They [the doctors] can’t give you hope when it comes to brain injury.

“My mum asked if she would ever be able to speak again and they said they couldn’t say.”

Sarah, from Hoddesdon, Herts., had been staying with her mother in Gouttières in central France when the crash happened on the evening of October 16.

Claire, also from Hoddesdon, said: “She lost control of the car, which went through a concrete post, a tree and through a brick wall.

“It flipped, drove up the wall and went on its back.”

She added: “It took them an hour to get her out of the car. “They resuscitated her in the ambulance, then a paramedic came and she got resuscitated again in a helicopter.

“By 10.30pm that night they were operating on her. She had bleeding on her brain. The stem of her brain has been damaged.

“She’s also blind in one eye from the impact, and she can only communicate by blinking.

“They put her in an induced coma for about a month.”

The former medical representative for GlaxoSmithKline is still in hospital in Clermont-Ferrand.

Claire said she had been prescribed strong antibiotics after catching sepsis and meningitis.

She added: “She still can’t move or talk. She’s having a big operation on Monday to put a permanent valve in, which will help with fluid on the brain.

“Then hopefully she will start rehabilitation.”

The sister, along with brother Bradley, dad Barry and mum Gillian, are taking turns to be by her bedside in France, as Sarah is not able to be flown home.

A JustGiving page has been set up by family friend Lucy Morris to help raise funds for her care.

Claire, who owns a barber shop, said: “We’re just taking it day by day. My mum’s out there at the moment, and my dad, my brother and I are taking turns to go.

“I would go out there today if I could, but it’s hard because I’m juggling my business. Claire described her younger sister, who studied physics at King’s College London, as an “outgoing” and “intelligent” woman.

She added: “She was very active. She went running every day and also went cycling. She was beautiful.

“It would be wonderful to see a smile on her face again one day.

“It will take a year for them to know what she will and won’t be able to do. We just need to take it day by day.”

Donations can be made to Sarah’s JustGiving page at https://www.justgiving.com/crowdfunding/lucy-morris-736.