The HGV crashed into Stuntney Bridge in Ely, Cambs., leaving the vehicle wedged on its side with the roof torn off 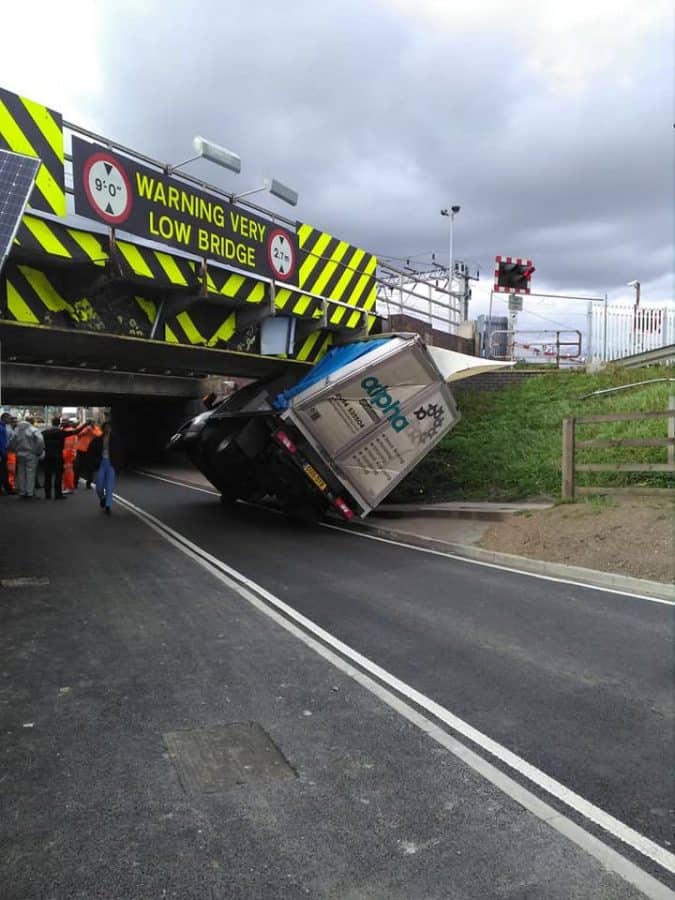 Britain’s ‘most bashed bridge’ has been smashed into by another lorry – just days after being reopened with new warning signs.

The 9ft tall structure, which is covered in bright yellow warning stripes, has reportedly been driven into at least 120 times since 2009.

The HGV crashed into Stuntney Bridge in Ely, Cambs., yesterday afternoon (mon) leaving the vehicle wedged on its side with the roof torn off.

Road police tweeted pictures of the prang, saying the driver had been “prosecuted”.

A Cambridgeshire County Council spokeswoman confirmed work had been completed on the bridge just last week.

A Network Rail spokesman said: “A lorry struck the bridge at 14.54 today [mon].

“There were some temporary speed restrictions in place in the area but these were removed at 15.35.

“There were no injuries but it did cause some damage to the bridge.

“Traffic in the area has now returned to normal.”

The spokesman added: “Today’s incident prompted Network Rail to reiterate its ‘wise up, size up’ message to drivers of all high vehicles.

“Drivers need to know the height of their vehicle, not guess. In short: Wise up, size up.”