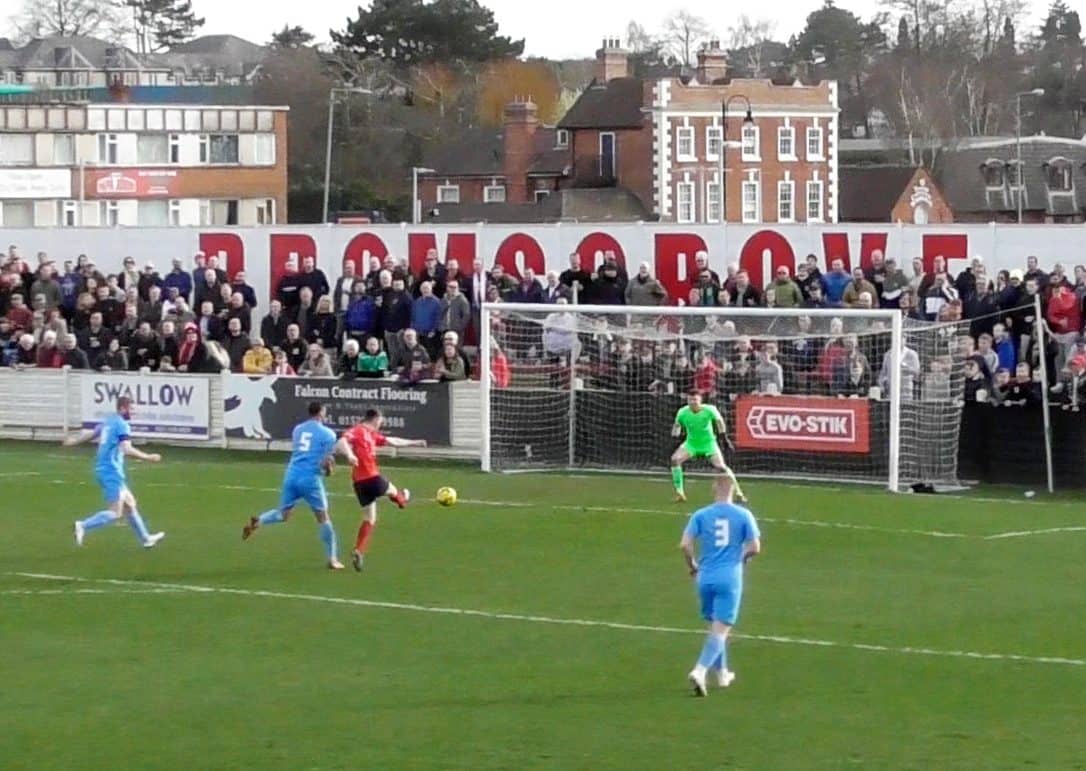 A non-league footballer has become a global online star after footage of his Gazza-style wonder goal went viral.

Jason Cowley’s volley was an almost identical goal to Gazza’s famous strike against Scotland in the Euro 96 championship at Wembley.

The dad-to-be scored the winning goal in Bromsgrove Sporting’s 2-1 victory over Corby Town in the Southern League Division One Central on Saturday (23/3).

The 23-year-old’s stunning goal has now been viewed and shared more than 400,000 times worldwide.

Demolition worker Jason, of Birmingham, said: “Things have gone absolutely mad since I scored the goal.

“There have been loads of positive comments from people all over the world.

“The ball just landed perfectly, I definitely meant to do it, it’s happened a couple of times this season but it never ended up in the position where I could have a shot.

“This time I knew exactly what to do with it.

“How did I feel? There just aren’t the words, I don’t have the vocabulary.

“My aim is to go full-time, that’s the dream of everyone, but I’d love to move up the leagues with Bromsgrove.

“So far this season I’ve got 27 goals, the leading goalscorer in the league, last year I got 34 but there’s still seven games to play, so it will be close.”

Jack, 14, who is studying for his GCSEs, said: “It was such an amazing goal and I feel so fortunate to have captured it on film.

“I’m surprised a football league club hasn’t snapped him up. Hopefully someone will give him the chance after watching what he can do.

“Everyone is talking about it, it’s all over Facebook, my notifications were mental and they just kept going, that goal has kept us on top of the league table.

“I try and go to every game, to see as many of possible and I really enjoy doing it, I started going at the beginning of the season.

“I live only a 15 minute walk from the town so it’s convenient for me to go on Saturdays.

“The last time I saw it there were 400,000 views. It was a million-to-one goal and I just happened to be in the right place at the right time.”