Video footage shows dozens of scarfed hat-wearing football enthusiasts jumping up and down in a frenzy, with fists and phones above their heads 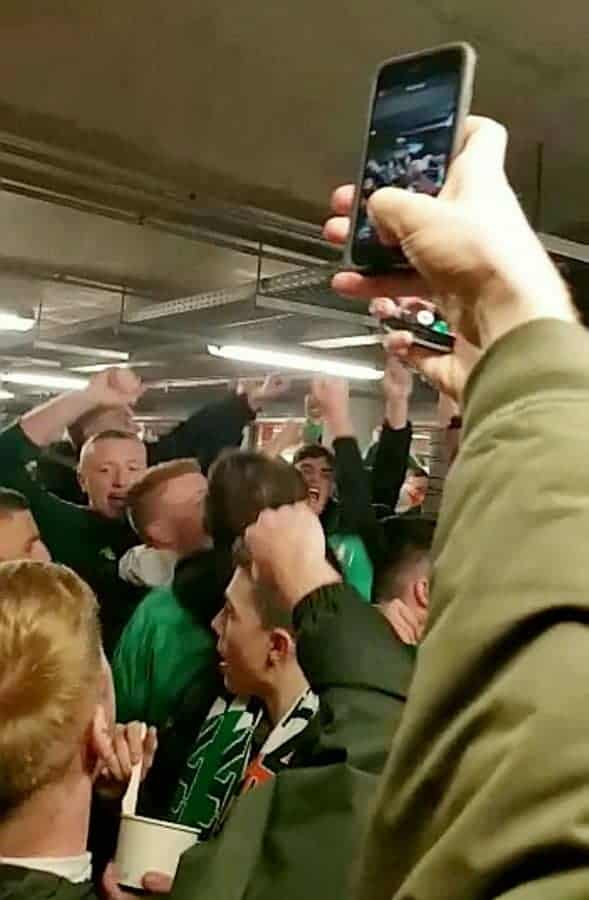 Video footage shows dozens of scarfed hat-wearing football enthusiasts jumping up and down in a frenzy, with fists and phones above their heads.

The mob can be heard singing winger McClean’s praises, as they begin and finish with the chant: “James McClean hates the f**king Queen!”

An eyewitness said the “repulsive” mob chant took place during the half-time of the Ireland v Denmark match on November 18.

He and his friends approached the crowd, which had gathered inside the Aviva Stadium in Dublin, and filmed the spectacle.

This comes as the Football Association (FA) revealed it has launched an investigation into alleged discriminatory behaviour after controversial footballer McClean was heckled during a game last week for not wearing a poppy on his shirt.

Londonderry-born McClean, 30, has repeatedly refused to wear a poppy on his strip during games which take place on or near November 11.

He was heckled during a Stoke City v Barnsley game on the 9th, as opposition team fans chanted “anti-IRA” and “anti-Pope” slurs, according to media reports.

The FA weighed into the drama, calling for an investigation into the alleged discriminatory behaviour on November 12.

But this video, filmed during Ireland’s game against Denmark in Dublin, shows that McClean is popular amongst certain football enthusiasts.

The eyewitness, 28, claimed that “McClean has a lot of fans” in the Republic of Ireland, slamming the chant as “not on” and “out-of-order”.

He also alleged “there were chants along the likes of ‘we hate the f**king British'” – but did not film the mob at this point.

And as a dad-of-one, he said “lots of young people, and especially young lads, were present” – and “cringed to think kids should hear that kind of thing”.

The eyewitness from Dublin added: “There’s really no point saying something as repellent as that, especially as there’s no place for it in football.

“Ireland weren’t even playing England, so I have no idea why that broke out.

“Personally I think they got carried away – in the heat of the moment, a popular player like McClean became the lightning rod for their passion.

“They obviously love McClean, because he’s a good player.

“I think they also love him because he’s seen as a ‘good local boy’ – and isn’t afraid to be controversial, with the poppy and stuff.

“But there’s no place for all that in a Euro match against Denmark.

“Their language was just vulgar – no one should speak about the Queen like that.”

Stoke City’s McClean grew up on the Creggan estate in Londonderry, Northern Ireland – the site of the notorious ‘Bloody Sunday’ in 1972, where 13 unarmed civil rights marchers were brutally murdered by British paratroopers.

Though McClean had represented Northern Ireland at a number of junior levels, he ultimately opted to represent the Republic at senior level.

McClean blasted the FA in 2018 for its perceived failure not to investigate alleged abuse directed against him on account of his Catholic background.

And last May, he posted a picture on social media of a birthday card addressed to him inscribed with a death threat because of his Republican beliefs.

The Republic of Ireland lost to Denmark in the Euro2020 qualifier.