Damien Hyde, 33, is due to tie the knot with his partner of five years Samantha O'Carrol, aged 31, on June 1 - the same day Liverpool go head to head with Tottenham Hotspur 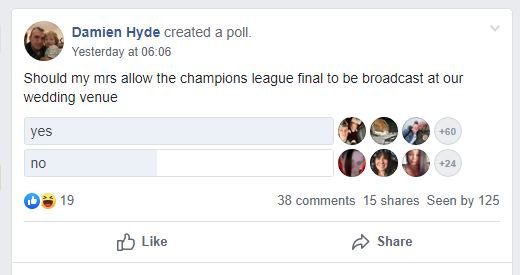 A groom-to-be has launched an online poll to ask whether his bride should allow him to have the Champions League final screened – at their wedding reception.

Damien Hyde, 33, is due to tie the knot with his partner of five years Samantha O’Carrol, aged 31, on June 1 – the same day Liverpool go head to head with Tottenham Hotspur.

The poll can be found on Facebook and is called ‘should my mrs allow me to watch the champions league final at wedding venu’.

The UEFA Champions League is an annual club football competition organised by the Union of European Football Associations and contested by top-division European clubs.

And this year these two British teams are set to play each other in Madrid at 8pm – exactly the same time the couple have booked their evening reception for 80 guests.

But when the parents-of-two, a nine-year-old daughter named Chloe and three-year-old daughter called Teagan, booked the date two years ago, Damien “never dreamed” it would be the night that two British football teams would play “such an important match”.

Damien, who supports Manchester United, said: “As soon as I heard that Liverpool and Tottenham were through I knew this was a match that I didn’t want to miss.

“This is so rare that both teams would be playing against each other, especially as they both had such a come back.

“And because our wedding reception is at a hotel, they are bound to be playing the match somewhere – and I don’t want people to leave the room to go and watch it.

“The guests could come along, watch the match and then enjoy the buffet and dancing. It’s no big deal.”

But when Damien suggested to Samantha that a screen be erected at their wedding venue, the Holiday Inn East in Milton Keynes – the response from Samantha was “a firm no.”

Damien, who has been engaged to Samantha for two years, said: “I don’t see the problem with having a screen at the reception – people will be on their phones anyway trying to watch the match.

“But Samantha obviously doesn’t agree, so I thought I should make a poll.

“We’re not rowing about it or anything.

“It’s just that we have different opinions. I think it’s okay to have a big football match shown on our wedding reception and Samantha doesn’t.”

“If the majority of people agree with me, maybe Samantha might change her mind. She’s not cross about the poll – she thinks it’s funny.”

Damien, who is rooting for Tottenham to win, also said that there will be guests at their wedding who are strong Liverpool and Tottenham fans.