The defending champions, USA, ended the run of hosts France. 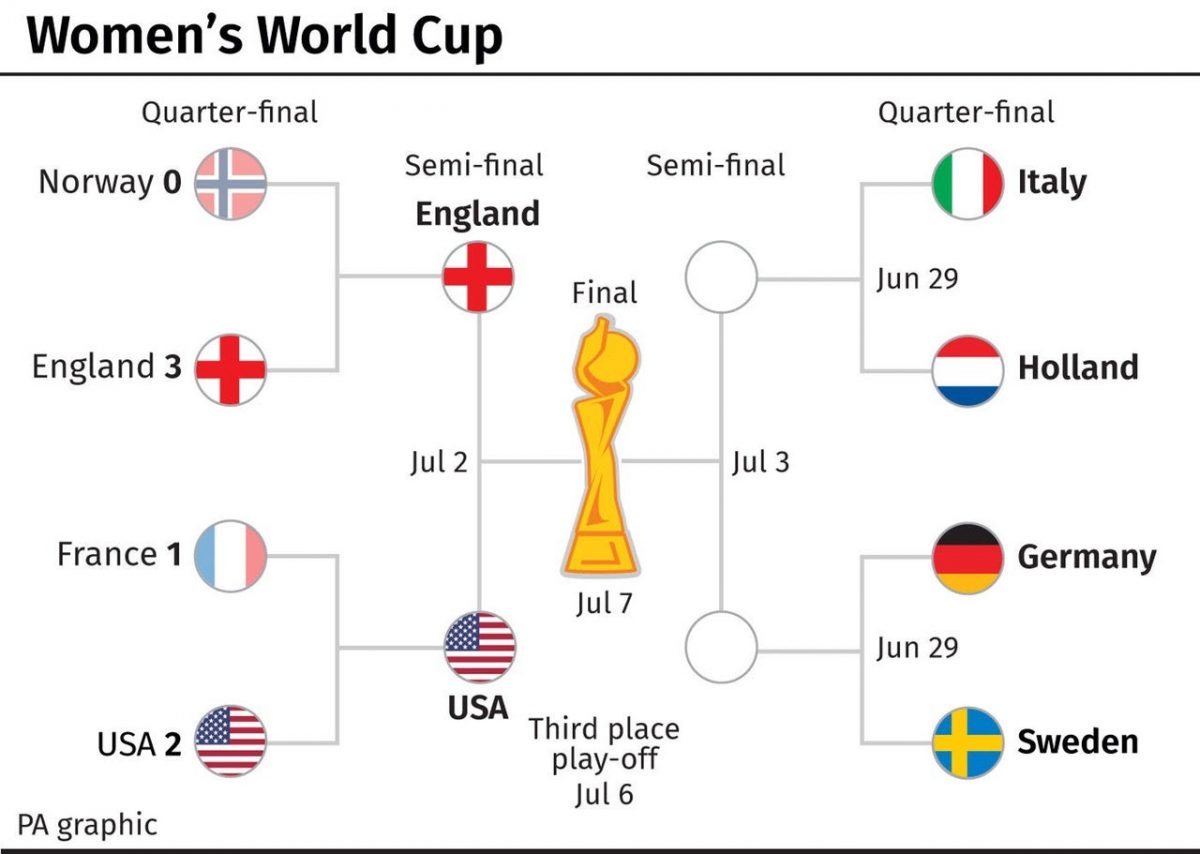 Megan Rapinoe did her talking on the pitch on Friday night as her two goals sunk hosts France and booked the United States a semi-final showdown with England at the Women’s World Cup.

The 33-year-old scored in either half as the holders sealed a 2-1 win in Paris to set up a meeting with Phil Neville’s side in Lyon on Tuesday.

Wendie Renard headed a late reply to ensure a tense finale, but the US survived, with their win also guaranteeing Great Britain qualification for the 2020 Olympics in Tokyo.

The build up to the match had been dominated by a row between Rapinoe and US President Donald Trump after footage shot earlier this year emerged of her saying “I’m not going to the f***ing White House” when she was asked if she would visit should her team be victorious at the World Cup.

Rapinoe, who is gay, has previously accused Trump of being “sexist” and “misogynistic” and she refuses to sing the national anthem before matches. Trump this week launched his own attack on Rapinoe on Twitter, accusing her of disrespect.

However, she was in the spotlight for her form on the pitch on Friday night and took just five minutes to make her mark.

Griedge Mbock fouled Alex Morgan down the left side and Rapinoe took the resulting free-kick. She fired the ball right-footed towards the near post and it sailed through a crowded six-yard box and into the net without taking a touch off anyone.

France were stunned but enjoyed much of the ball thereafter without really troubling goalkeeper Alyssa Naeher. At the other end, Morgan worked Sarah Bouhaddi with a low shot from just inside the area.

Eugenie Le Sommer missed the target with a couple of headed efforts, but the US looked more likely to score again and Sam Mewis brought a decent save from Bouhaddi early in the second half, with the France goalkeeper then denying Tobin Heath with her foot on the rebound.

Rapinoe doubled the lead after 65 minutes after Heath did the hard work down the right and her low cross was missed by Renard, leaving the arriving Rapinoe to tap in at the far post.

It was virtually one-way traffic after that as France fought hard to get back into the match and keep alive their World Cup dream.

Naeher did well to tip Le Sommer’s looping toe-poke over the crossbar before the hosts were rewarded for their pressure with nine minutes remaining when Renard headed into the roof of the net from a free-kick out on the left.

The US withstood some relentless pressure in the final minutes, as well as a penalty appeal that was not referred to VAR when the ball struck Kelley O’Hara’s arm which was by her side.

But they survived and the defence of their title will continue against England.