Test cricket returned to our screens on Wednesday, but powerful broadcasting about Black Lives Matter made it feel irrelevant 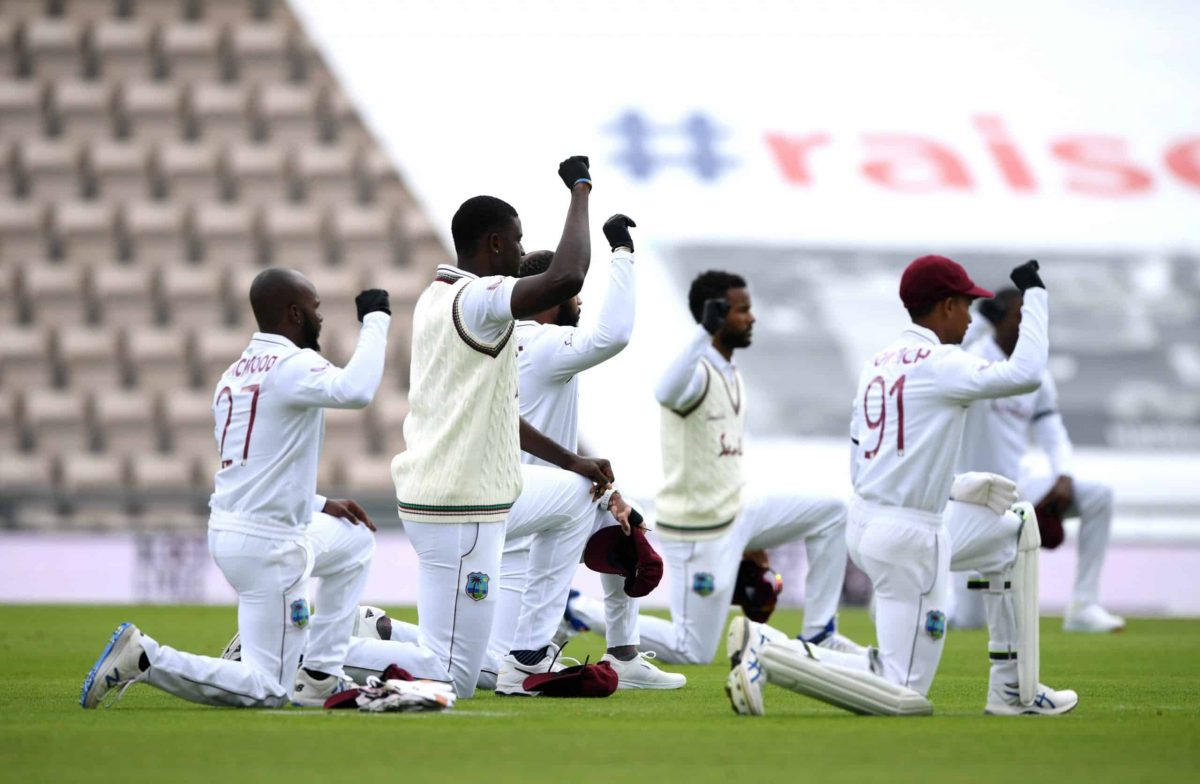 Test cricket is back. It rained, obviously. Dom Sibley left a straight one in the second over. Joe Denly chewed up deliveries, forever looking unlikely to survive the next. Rory Burns fidgeted and flicked a few off his legs. It was like it never left.

Since sport returned to our screens it has become a bit of a cliché to say that the action on the pitch is incidental, even irrelevant.

To some the Great Resumption has provided definitive proof that sport is a soulless product, indivisible from the broadcasters and businesses who fund it. Come off it. Test cricket a cold and unemotional affair? Tell that to Ben Stokes.

But, as soon as the cameras began to roll from the Ageas Bowl this morning, cricket was relegated to a sideshow – and rightly so.

It feels especially relevant that it is the West Indies who have taken the plunge and decided to tour England in this, the most unusual of summers.

Cricket was exported by the British to its colonies. Scan a list of major cricketing nations – it’s like reading a Who’s Who of peoples conquered, subjugated and enslaved by the British Empire: West Indies, India, Pakistan, Australia, Sri Lanka, New Zealand.

The systemic racism of the British Empire created modern cricket as we know it, and when England plays the West Indies that lasting tension becomes much more stark. From Tony Greig’s “make them grovel” in 1977 through to the great ‘BLACK WASH’ side of 1984, Race and Empire have always run as an undercurrent to contests between these two teams.

It endures to this day. That 1984 side’s opening batsman – the absurdly brilliant Gordon Greenidge – was a member of the Windrush Generation, so neglected and discriminated against by the British government.

BAME people have been disproportionately killed by Covid-19, and the rate of infection in Britain is still high. For the West Indies to tour England, in this climate, is a remarkable gesture. It begs the question, if the roles were reversed, would England do the same?

The last time they came here, in 2017, Geoffrey Boycott claimed he would be more likely to be given a knighthood if he blacked up. He was knighted by Theresa May last year and, until this summer, was a figurehead of the BBC’s cricket coverage.

It would have been easy for Sky’s cricket coverage to follow where football has led – to decry the murder of George Floyd, voice its support for Black Lives Matter and applaud those players taking a knee to protest police brutality.

Instead, it went above and beyond. In a powerful half-an-hour segment the Black ex-England cricketer Ebony Rainford-Brent and Michael Holding, the West Indian great who was part of that 1984 side, sounded off on the reality of institutionalised racism, past and present, in sport and society more widely.

Rainford-Brent choked up as she discussed the pervasiveness of the racism she has faced, and the visceral anger she felt when she saw the video of Floyd’s killing. Holding spoke eloquently on white supremacy and white privilege, and demolished the bullshit whataboutery of ‘All Lives Matter’.

Soon after, Holding – speaking live – became visibly emotional as he emphasised the significance of education and activism in the effort to eradicate racism.

That both were given a platform, uninterrupted and unchallenged, to do that on cricket’s flagship programme, on its flagship day, is hugely significant. It was unvarnished reality, beamed into the homes of supporters of a sport which has massive issues with diversity and representation. It could go a long way to changing minds.

Just 17.4 overs were possible on the first day of the English cricketing summer, as rain intervened throughout. Burns sits on 20 overnight, Denly – somehow both steadfast and streaky – on 14. But none of that really mattered. The last word belonged to Rainford-Brent and Holding.