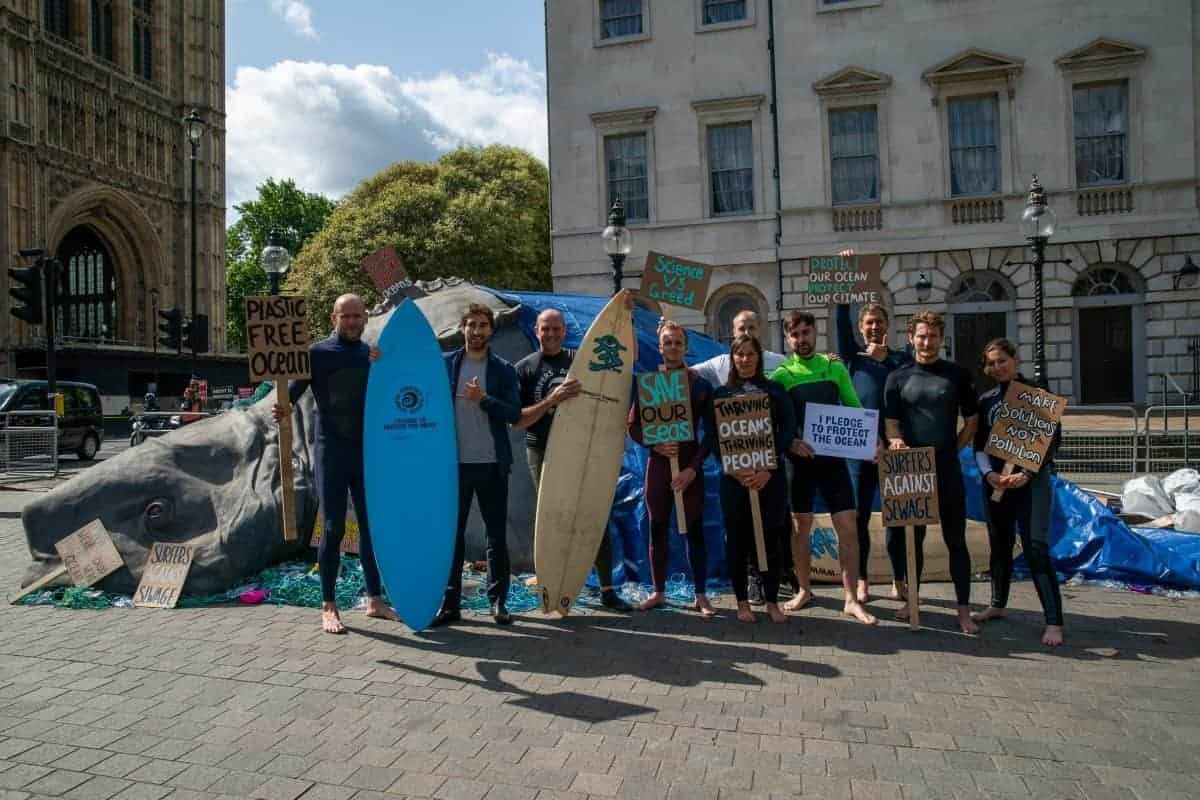 The Sea Creature of Westminster – a 15ft ‘unknown sea creature’ created by Surfers Against Sewage (SAS) can be seen outside of the Houses of Parliament for World Environment Day.

According to the environmental group, one marine mammal or sea bird dies every 30 seconds due to plastic pollution.

With 95% of the planet’s oceans unexplored, and scientists knowing more about the face of Mars than the sea floor, the charity wants to highlight the threat of plastic pollution to the many species that are yet to be uncovered, as well as those that are already known to be dying as a result of human actions.

Flamini is also an enviornmental entrepeneur, and co-founder of GF Biochemicals, which he says he founded “with the ambition of finding sustainable alternatives to oil-based products”

The campaigners call on the government leaders to support their mission to rid the seas of plastic.

The short film, launched by environmental charity Surfers Against Sewage (SAS), tells the heart-breaking story of an unknown marine animal, which washes up on a stunning, sandy beach.

Within the film, called ‘Creature’, we see a local community coming together to try and save the animal, pulling plastic from its body as children rush to bathe it in sea water and coax it to fight.

From single-use bottles and shopping bags to empty food containers and ghost netting, items drop to the ground as people dig out the harmful pollution in an attempt to help the mysterious ‘creature’ breathe again.

And, for just over three minutes, the film depicts how a community can be shocked into action amid the heart-break of a direct result of human action.

SAS said they are calling on people in the UK to come together and sign its #GenerationSea petition, urging the next Prime Minister to introduce new laws and changes to save the seas and the creatures that live within them.

Ben Hewitt, Director of Campaigns and Projects, Surfers Against Sewage, said: “Every year new and unique ocean dwelling creatures are being discovered in the depths of the marine world. Meanwhile, humankind is treating our sea as a ‘single-use ocean’ – filling it with plastic, changing its chemistry through carbon emissions and stripping it of all natural abundance.

“We’ve built ‘Creature’ to represent the sea life that people are destroying without even being aware of it. People will only thrive if our ocean thrives.

“At present, we’re sleep-walking into slaughter – but it’s not too late. With the help of the general public and policy makers, we can ensure our oceans remain a place that our sea life can continue to flourish in.

“Ignore this warning, however, and we risk the next generation never knowing many of the species we’ve all grown up with.”