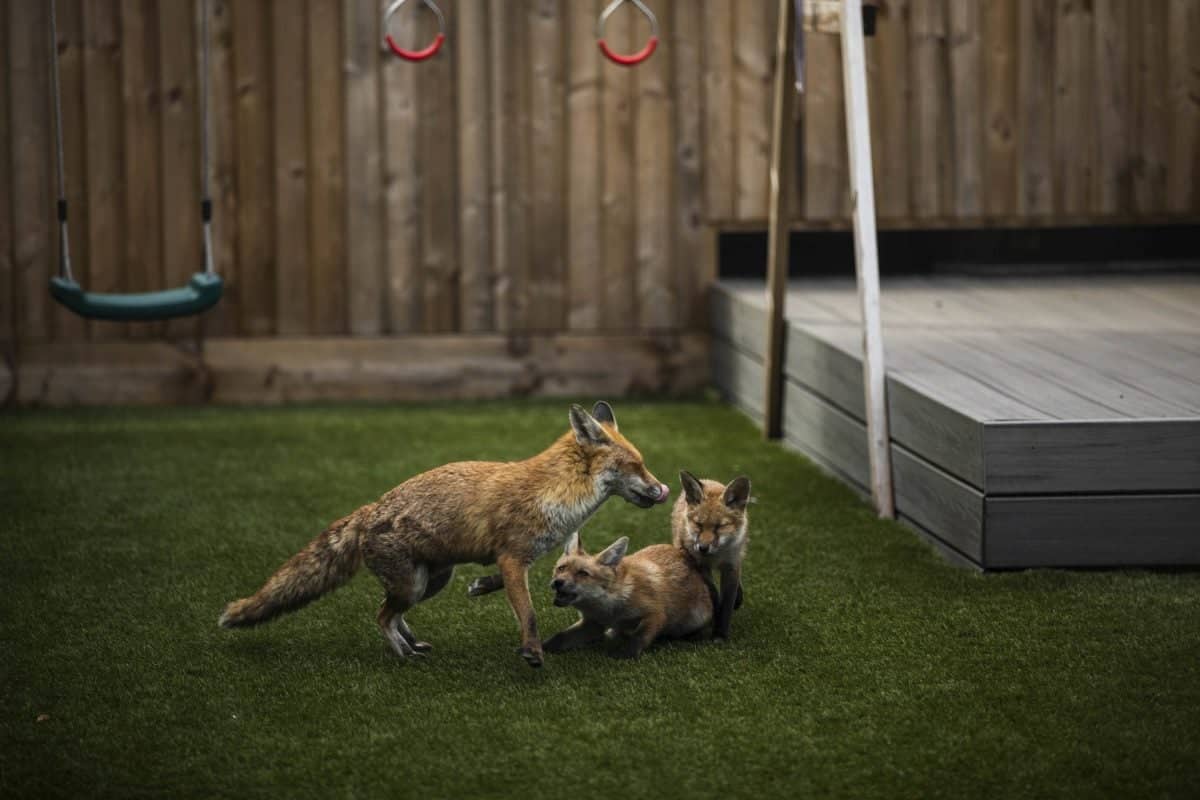 A desperate homeowner says her dream back garden has been blighted after a entire family of ‘cute’ foxes moved in and trashed it.

Zoe Hunt, 39, and husband Dan have become virtual prisoners in her own home since the seven foxes – two adults and five cubs – took up squatters’ rights three weeks ago.

The couple had spent thousands of pounds renovating the garden – installing artificial grass, a play area for the children and the composite decking area.

But the fox family tunneled under the decking and set up home, before they “trashed it” by tearing up the grass and “pooing all over the place”.

Paediatric first aid trainer Zoe, and Dan, 40, say the foxes may look cute and cuddly, but are actually a nuisance.

They are convinced the “flea-ridden foxes”, and their excrement, pose a health risk to their two young daughters Amber, eight, and Millie, five.

The girls are scared to play in the garden and were left traumatised after finding a drowned fox cub in their paddling pool.

The family, who live in Ashton, Bristol, are at their wits’ end, but Zoe has been advised to wait until autumn when the foxes are likely to leave of their own accord.

Zoe plans to contact the RSPCA for a second opinion, describing the fox infestation as a “health hazard”.

There is no known case of people catching diseases from foxes or their droppings in Britain, according to thefoxwebsite.net.

The website suggests people are more likely to catch an infection from a pet dog or cat. It is possible for dogs to catch mange off foxes, but unlikely

Zoe, added: “Everyone on Facebook says they are really cute and it’s true – but they are also flea-ridden and poo all over the garden.

“There’s not a lot we can do – advice online says they will leave in the autumn.

“They are ruining the fake grass. I have to go out with marigolds on and pick the poo up so the girls can go out and play.

“But I can’t keep on top of it because the foxes are always running riot. They now come out at anytime of day because they feel comfortable.

“We did have six cubs running around, but there are five now because one drowned in the paddling pool.

“The girls went out into the garden and discovered the lifeless cub floating in their paddling pool.

“They are scared to go into the garden now and I’ve got six weeks of school holidays coming up.”

Zoe says the inquisitive foxes even stray into the conservatory for a poke around and often wake up Dan, a glazier, in the night, with their antics.

Neighbours are also concerned about the foxes rummaging through bins in the street.

They exit the garden by climbing onto the fence and dropping down from the garage.