Nicola Bentley, 46, and husband Phil, 48, have been faced with including lumpy strips of artificial turf, doors that don’t fit properly and unsteady brickwork 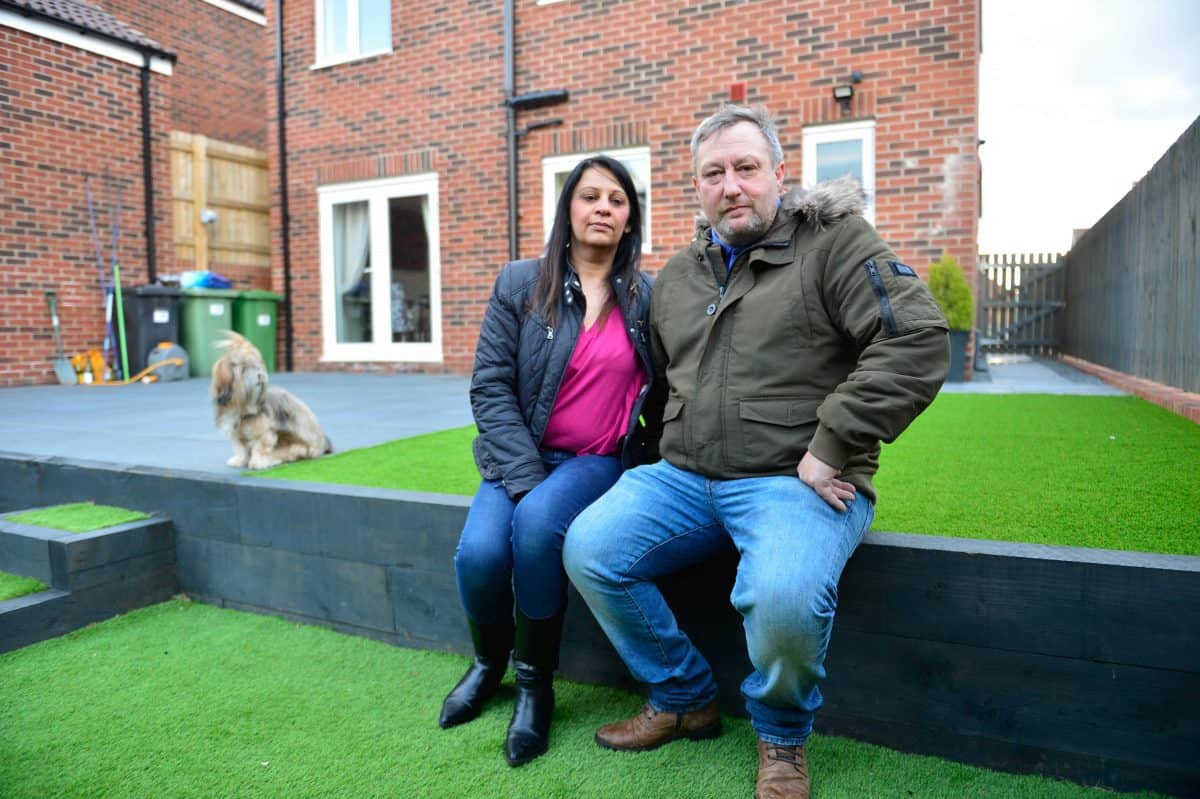 A couple say they have been left ‘at breaking point’ after discovering a staggering 700 faults in their brand new £280,000 home.

Nicola Bentley, 46, and husband Phil, 48, claim that, despite complaining about the faults ten months ago, only 10 per cent of them have been fixed.

The couple used their life savings to help buy their four-bedroom dream-home, off plan from controversial house-builders Persimmon after viewing a stunning show home.

But within days of moving into the detached home, they found a host of problems including doors that don’t fit properly and holes in the plasterwork.

They also discovered architraves which aren’t level, cracking around the window boards, bubbled paintwork and even the turf in their garden was lumpy and uneven.

The married couple, who have two children aged 10 and 15, say the home in Kippax near Leeds, West Yorks., was left looking like a building site.

They noticed problems as soon as they got the keys last May and it has been an uphill struggle ever since.

But despite contacting Persimmon Homes on a weekly basis the couple claim only 10% of the defects identified have actually been repaired.

Mother-of-two Nicola said: “It’s been awful and it’s taken over our lives. There isn’t one room in the whole house which is complete.

“We are living in a building site, we haven’t been able to put any photos up on the walls and there is just a TV and sofa in the living room.

“We don’t like to wallow in self-pity but this has dragged us down so much, it has nearly broken us as a family.

“It’s been horrendous and the worst year of our lives. We wish we had never done it.

“This is our life savings, we have put everything into the house. I thought we had a dream home but it’s turned into a nightmare from hell.

“They keep apologising but apologies aren’t good enough. I just want our house finished and I want it right.”

The couple outgrew their previous home of 17 years and decided to look for a bigger property.

Nicola and Phil viewed a showroom home in September 2017 which was of a similar style to the prospective house they were looking to move into to.

After discussions, they decided to go-ahead with purchasing the new-build which was bought off-plan.

However, they were allegedly not allowed to inspect the property to make a snagging list prior to the exchange of contracts because it was “against Persimmon policy”.

Dalek Graphics managing director Phil said: “To start with, the Monday after we moved in we received a snagging report saying there were 500 defects. I identified a further 200.

“We were not allowed to inspect the house before we bought it. They said it was against Persimmon Homes policy to let us in before we signed on the dotted line.

“We spoke to the solicitor about pulling out but we were advised it would cost up to £15,000.

“They said if we didn’t move in when they said it would cost £100 a day in penalty fees.

“We bought the house off plan. We liked the area and looked at a showroom house in a different development in Castleford in September 2017 which was of a similar style.

“The first thing I noticed when they gave us a new home demonstration was they had put the wrong size casings on every door, it was about an inch too big.

Persimmon, the housebuilder which is at risk of seeing its lucrative Help to Buy contract removed, saw pre-tax profits surpass £1billion last year.

The housebuilder is reportedly at risk of being stripped of its right to participate in the Government’s Help to Buy mortgage scheme.

That’s allegedly because of issues including the use of Help to Buy to acquire houses with leases, the quality of Persimmon homes and treatment of customers, and its leadership in the wake of the backlash over pay.

The FTSE 100 company also recently confirmed that interim chief executive Dave Jenkinson will stay on in the role permanently after previous boss Jeff Fairburn was forced out at the end of last year following an outcry over his £75million bonus.

A spokesperson for Persimmon Homes has been contacted for comment.