“We were having phone calls from the neighbours, saying, ‘don’t allow kids to go in the garden’.” 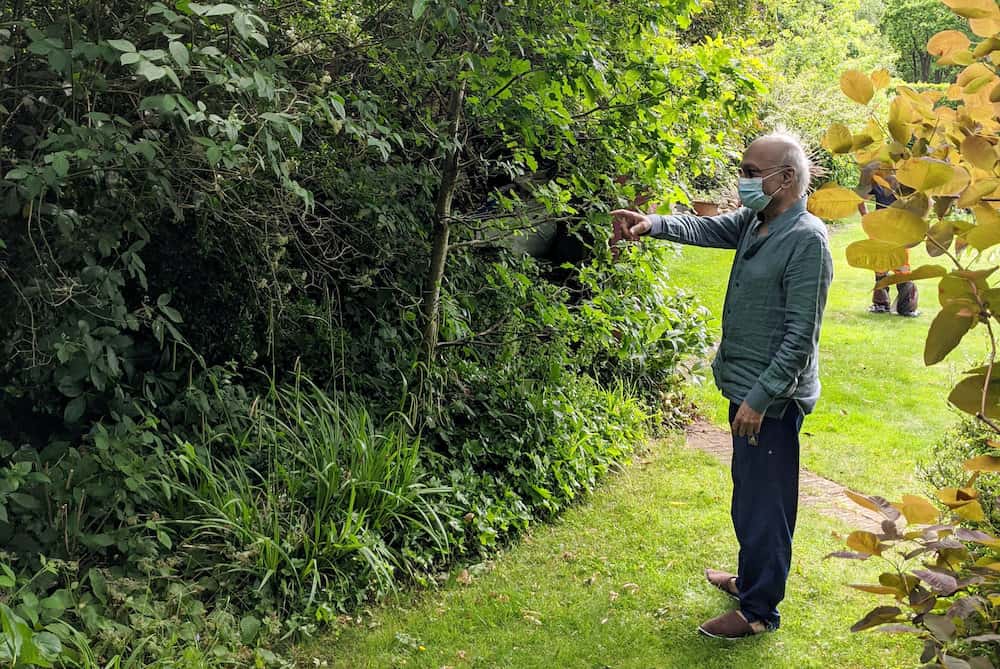 A billionaire has told how armed police descended on his house and cornered a big cat in his garden in north London.

But the animal managed to escape from the huge garden in a road next to The Bishop’s Avenue, dubbed ‘billionaire’s row’.

Nirmal Sethia, 78, told how officers arrived at about 9.30 last night and were there for four hours in the house in Winnington Road, where business mogul Gerald Ronson and property magnate Chris Lazari also have properties.

He said he now fears for his two-year-old twin grandchildren, a boy and a girl, who are quarantining with him with their parents in his mansion in Hampstead, north London.

The tycoon behind luxury brand Newby Teas said officers knocked on his door at 9.30pm last night to ask if they could search for the cat in his garden.

The Metropolitan Police said the cat, which could be a pet hybrid Savannah cat, was not deemed a danger to the public and no attacks had been reported.

But Mr Sethia is not so sure, saying he is convinced it could be a cheetah or a small leopard that could be a danger to families in the “Billionaire’s Row”.

He said: “At 9.30pm all of the police officers came and explained to me there is a wild cat which is loose and asked, ‘Would you kindly allow us to go into the garden and have a look for it?’.

“The garden is huge, and there are lots of trees where it could be hidden. Police said it could be a cheetah.

“He showed me a picture taken by the gentleman at number 17 who was having dinner.

“Number 19 has no garden. It’s a small patch. It’s an insignificant patch so it had to come through here.

“The main garden is here. This is probably the biggest garden on Winnington Road. There are lots of bushes.

“Slowly more and more people started coming and about 12 police, then 15 to 20.

“Most of them had guns, some had machine guns. Some had those electronic tasers.

“They identified the cat. They were totally vigilant. The cat was hidden behind in the bushes and made its way along the back of my garden.”

Mr Sethia said there were around 11 officers in his home, with around seven or eight armed officers out in the garden trying to corner the cat.

He said a helicopter hovered overhead while an expert from Kent on wild species also attended the property.

He said: “None of the garden was damaged by the cat or the police.

“I’m very proud of our police. Very proud as they were impeccably behaved, polite, and very cooperative. They cornered it at the side.

“When it was getting late, I was tired. We all decided to retire and leave the police force in the garden.”

He added: “In the morning I was told the cat had escaped. They had the guns, they had everything. Why did they allow it to escape?

“I believe it was an excuse [to say it was a Savannah cat]. If you look at the picture, it’s a cheetah.

“There are crazy people. Somebody who’s influential or has money, he decides to have a cheetah and keep it in the house.

“If you go to Dubai or Saudi they have their zoos as the land is practically free.

“Here the land is restricted and expensive. Someone around has kept a cheetah and the cheetah found a chance to escape.

“There was an incident last year with a Savannah cat, so I think they’re trying to link the Savannah cat incident in September last year to this incident.”

He said the entire neighbourhood has been alight with nerves over the loose big cat, which has still not be found according to the police.

“Every house practically knew it. If there was some owner, why had they not claimed it?

“To the best of my knowledge, it hasn’t been claimed.

“It may have gone back to the owner. If it escaped and it’s loose, then the risk is there. I don’t know what the truth is.

“I hope the owner is questioned on why they want to keep a dangerous species.

“The cat may not be dangerous, but it looks dangerous. For those that don’t know what’s going on, it’s a terror.

“I’ve got two two-year-old grandchildren. We have a garden. My instruction to the staff and nanny is to keep them safe.

“It’s scary. Thank god it happened in the evening. The focus should be is finding out who is the owner?

“How will the government deal with the owner? If he had permission to have it, how come he lacks the capability of managing something which he decided to have for his pleasure?

“His pleasure gives so much discomfort and terrorises so many people.

“We were having phone calls from the neighbours, saying, ‘don’t allow kids to go in the garden’.”

Mr Sethia, who spends the majority of his time living in Dubai, has owned the property since 1976.

The semi-retired businessman, who now spends the majority of his time looking after his charity the N Sethia Foundation which focuses on funding medical research, said while the police officers that attended his property were excellent he wants answers on how they could let the cat go.

He said: “The police handled the situation very well. I’ve seen police forces in other countries become very arrogant. They were very polite.

“The code of conduct was amazing. They did their best to protect everybody. I expected they had the right to shoot.

“If it was a cheetah or a Savannah, whatever it was terrorised everybody and could have been anything.

“If it was a cheetah, it could have hurt anybody.

“But then maybe for political reasons, and not to terrorise the people living in the area, they might have said it was a Savannah cat.

“How did the police let it go? How did the cat escape? For four hours it was in my garden. What happened?”

The owner of number 17, who phoned the police about the loose cat, said they “did not want to speak about the incident”.

Other neighbours said they were nervous about letting their children or small pets out in their gardens.

One woman, who only gave her name as Maria, said: “I’m not letting my puppy out in the garden, that’s for sure, until I know it’s found.

“The police must find it and speak to the owner as soon as possible.

The Metropolitan Police has tried to comfort the public by saying it was not deemed a danger and no attacks had been reported.

“An animal expert also attended and visually assessed the cat; it was concluded the animal was not thought to be dangerous or a threat to the public.

“The cat made off from the garden; enquiries continue to locate it.

“There have been no reports of attacks or injuries to members of the public.”