The US President didn’t hold back when discussing the Labour leader today. He was conducting a news conference, alongside Theresa May, when he let rip at Corbyn. He labelled him a ‘negative force’ in UK politics and said he rejected a request from Corbyn to meet. Speaking in the Foreign Office after holding talks with […] 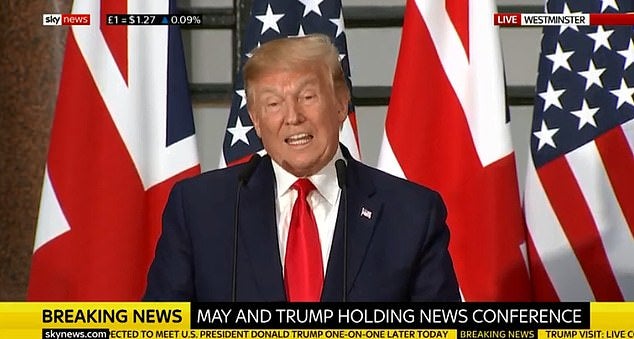 The US President didn’t hold back when discussing the Labour leader today. He was conducting a news conference, alongside Theresa May, when he let rip at Corbyn.

He labelled him a ‘negative force’ in UK politics and said he rejected a request from Corbyn to meet.

Speaking in the Foreign Office after holding talks with Mrs May, Mr Trump said: ‘He (Corbyn) wanted to meet with me and I said no.’

He continued: ‘I really don’t like critics as much as I like people who get things done. So I decided not to meet him.’

Only moment earlier Jeremy Corbyn had spoken at a mass demonstration against the US president.

The Labour leader had publicly turned down an invitation to a state banquet, hosted by the Queen for Mr Trump.

“Tomorrow’s protest against Donald Trump’s state visit is an opportunity to stand in solidarity with those he’s attacked in America, around the world and in our own country – including, just this morning, Sadiq Khan,” the Labour Leader tweeted earlier.

Meanwhile, news emerged that Boris Johnson turned down a meeting with Donald Trump.

According to Politico, a source close to Boris Johnson said the former Foreign Secretary said thanks but no thanks to an offer from the US President of a one-to-one.

Excusing himself as he had a campaign event for his bid to replaceTheresa May, Johnson instead had a phone call with the the President described as “friendly and productive.”

Michael Gove’s team said the President had asked to meet the second favourite candidate to be the next Prime Minister too.