Former first minister Alex Salmond also conceded it is unlikely his new Alba Party will take seats in this election. 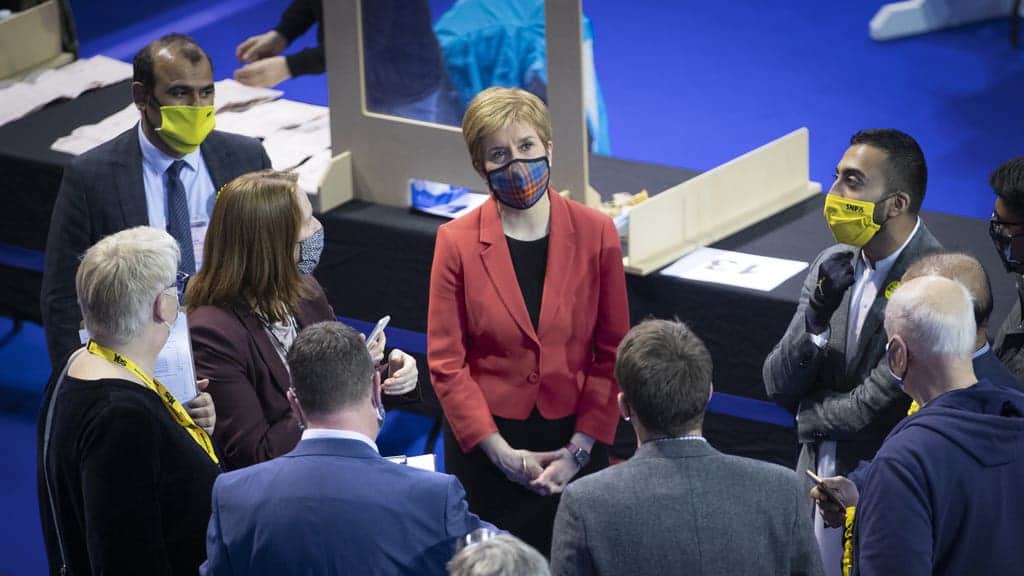 Nicola Sturgeon’s chances of winning an overall majority at Holyrood have declined, after her SNP failed to win key seats.

With counting continuing in the Scottish Parliament election, the Tories managed to see off the challenge from the SNP in the key of Aberdeenshire West.

The failure to win there makes it harder for Ms Sturgeon to win an overall majority in the 129-seat Parliament – something the SNP had wanted to strengthen their case for a second independence referendum.

West Aberdeenshire. I've always said this is a beautiful part of the world.

Incredible result by @AJABurnett. A @ScotTories increase of 9%. Majority up from 900 to over 3000.

But while Prime Minister Boris Johnson insisted it would  “irresponsible and reckless” to have such a ballot as Britain emerges from the coronavirus crisis, it appears certain that there will be a majority of MSPs in the new Parliament who support independence.

Mr Johnson told The Daily Telegraph that his impression was that Scottish voters had “moved away from the idea of a referendum”.

His comments came as the Tories held key seats such as Aberdeenshire West and Galloway and West Dumfries.

And while the SNP had made some gains in the constituency votes at Holyrood on Friday, their success in gaining Ayr and East Lothian, from the Tories and Labour respectively, will see them lose MSPs from the South of Scotland regional list.

With 70 of the 129 seats so far declared, the SNP has claimed 59, the Tories have five, Liberal Democrats four while Labour has two.

However the regional ballots, via which 56 MSPs are elected, have still to be announced.

The coronavirus pandemic meant traditional overnight counts were abandoned after Thursday’s Scottish Parliament election, with counting instead taking place on Friday and Saturday.

?History made tonight: the fabulous @kaukabstewart becomes the first women of colour to take a seat in the Scottish Parliament. She is the new SNP MSP for Glasgow Kelvin #SP21 #SNPHold pic.twitter.com/uzoLOupgby

“The choice of a better future”

And while new MSPs at Holyrood have still to be declared, Ms Sturgeon said it is “almost certain” the SNP will win its fourth term in power at Holyrood.

She also stressed that “when the time is right”, she should be able to offer Scots “the choice of a better future” in a second independence referendum.

However, when asked what he would do if Ms Sturgeon attempted to hold one without a Section 30 order from Westminster granting permission, Mr Johnson insisted there was “no case now for such a thing”.

The SNP has pledged to push forward with legislation at Holyrood for a second Scottish independence referendum which, if passed, could be challenged by the UK Government in court.

Ms Sturgeon, who comfortably defeated Scottish Labour leader Anas Sarwar to claim Glasgow Southside, said afterwards: “My focus, if we are re-elected as the government, is to get back to work to steer the country through the crisis and into recovery.

“That remains the case. But once the crisis is over, and if there is a majority in the parliament for an independence referendum, people should have the right to choose our future. Scotland’s future should always be in Scotland’s hands.”

The election also saw the election of the first ever woman of colour to the Scottish Parliament, with Kaukab Stewart voted in as the new SNP MSP for Glasgow Kelvin.

Meanwhile, former first minister Alex Salmond conceded it is unlikely his new Alba Party will take seats in this election.

“But in some of the big ballot boxes, I think we ended up over 3 per cent in Aberdeenshire East, the same in Banff and Buchan, a bit more actually, which I’m pleased with because these are our best results in Scotland.

“But that doesn’t get you a seat. You need 4.5 per cent, maybe 5 per cent, to get a seat. But nonetheless it’s a creditable performance for a party which has just celebrated its sixth birthday – in other words, we are six weeks old.”