The SNP has said Douglas Ross is ‘knee-deep in the Tory sleaze scandal’ as the Scottish Tory leader referred himself to the Standards Commissioner. 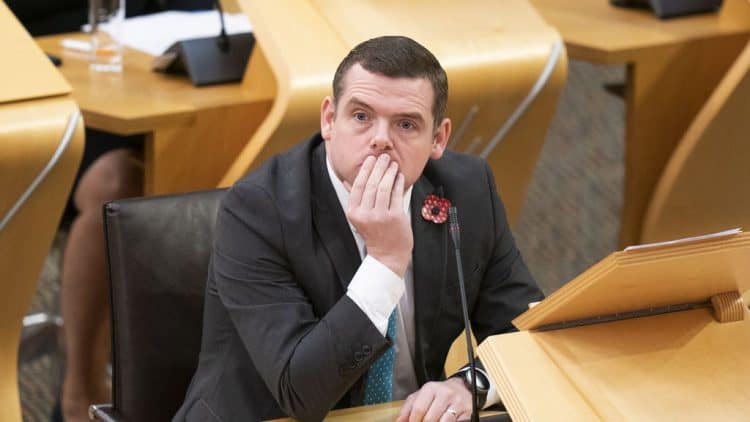 Mr Ross was forced to refer himself to the Standards Commissioner for failing to declare thousands of pounds in outside earnings.

According to reports in The Herald, the triple-jobbing MP failed to declare £28,218.57 in outside earnings from his second job as an MSP and third job as a football referee.

The SNP said that, since being elected, Mr Ross has missed multiple votes, important events, and parliamentary meetings at Westminster and Holyrood to earn thousands of pounds from his outside interests, including running the line on a football pitch.

SNP Westminster deputy leader Kirsten Oswald MP said: “The rule-breaking Scottish Tory leader must shift his attention from maximising his outside earnings and start focusing on his role as an MSP, which is supposed to be a full-time job.

“Failing to declare thousands of pounds from multiple side hustles is a clear breach of the rules but the bigger concern is that Mr Ross isn’t doing the day job.

“It is time to blow the whistle on Tory sleaze.

“People in Scotland deserve better than this and Mr Ross must finally decide whether he wants to be an MP, MSP or full-time referee.

“By desperately clinging onto his Westminster seat, Mr Ross has scored an own goal.

“Voters are not impressed, and people will rightly question whether he’s doing it to make more money or because he’s secretly planning to quit as an MSP when he is inevitably replaced as Scottish Tory leader.”

Speaking to the Herald, Mr Ross said: “Since realising my mistake last week, I contacted the Office of the Register of Interests and made them aware of the situation.

“All payments have now been declared, including those from my MSP salary that are donated to charities.”