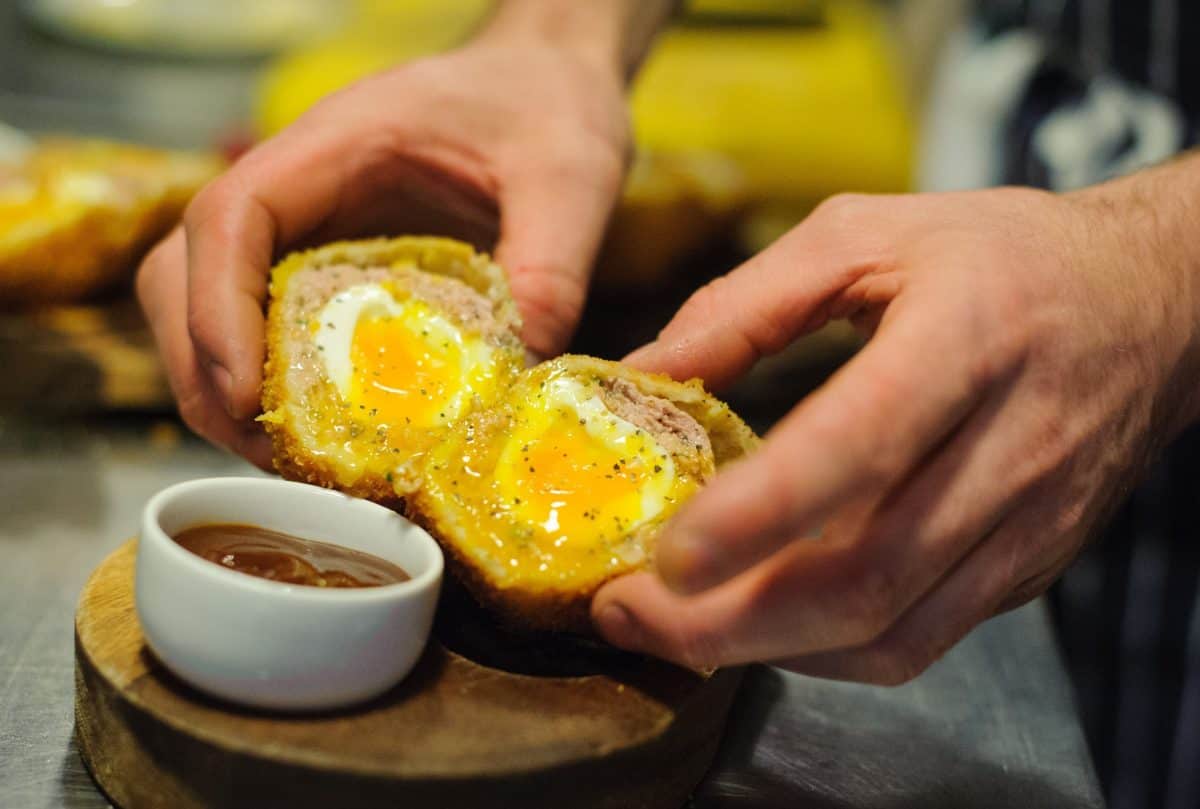 The Government’s new ‘Scotch egg rule’ has been ridiculed today with several newspapers leading with the bizarre ruling on their front pages.

George Eustice yesterday suggested that drinkers could order the popular bar snack with their pint to get around the Tier 2 restrictions in England.

He said the snack would constitute a “substantial meal” under the rules which will only allow alcohol to be served with food in Tier 2 areas from Wednesday.

More than 57 per cent of England’s population will be in the middle tier, with severe restrictions imposed on pubs.

In the harsher Tier 3, affecting more than 41 per cent of the population, pubs and restaurants can only operate on a takeaway or delivery basis.

Environment Secretary Mr Eustice said the “substantial meal” provision in Tier 2 was “understood very much by the restaurant trade”.

Tomorrow's front page: 'People CAN stay at the pub to finish their drinks in Tier 2 – and Scotch eggs DO count as a meal' https://t.co/X5P7kWRoZy pic.twitter.com/oAeWyycRoR

Scores of Tory MPs have raised concern about the tiers ahead of Tuesday’s Commons vote on the new system.

Mr Eustice admitted the restrictions may not be “perfectly consistent” or fair.

On the “substantial meal” rule, Mr Eustice said: “The evidence has been that some of the challenges we have had with pubs were where you had large groups of people congregating and actually not maintaining social distancing, they were just drinking.

“They were more likely to maintain social distancing sat down and having a meal.”

He told talkRadio: “The measures we’re taking are all about trying to break the cycle of infection and that doesn’t mean that every rule that we introduce and every requirement we put on people is perfectly consistent or might even be considered perfectly fair – indeed, they won’t be.”

Mr Eustice’s views on the Scotch egg are not the first time a Cabinet minister has faced questions about the “substantial meal” rules.

Under the previous tiers system, before England’s national lockdown, Communities Secretary Robert Jenrick suggested that a Cornish pasty served with chips or salad would count.

“If you would expect to go into that restaurant normally, or pub, and order a plated meal at the table of a Cornish pasty with chips or side salad or whatever it comes with, then that’s a normal meal,” he said.

Asked about Mr Eustice’s comments, Downing Street insisted that the concept of a “substantial meal” was well understood in the hospitality industry without saying whether that included a Scotch egg.

The Prime Minister’s official spokesman refused to spell out the difference between a “bar snack” and a meal.

Pressed on whether the rules permit pints being served alongside sausage rolls, pork pies, or a ploughman’s lunch, he said: “I’m obviously not going to get into the detail of every possible meal.

“But we’ve been clear: bar snacks do not count as a substantial meal but it’s well established practice in the hospitality industry what does.”

Early reaction to the announcement has been largely one of derision. We’ve picked out the best bits below:

We are ready for re opening on Wednesday ? #scotchegg #beaconsfield #chilterns #Bucks #M25 #BeaconsfieldServices pic.twitter.com/jngR9x186X

When I order a scotch egg and 10 pints pic.twitter.com/lWfnWoQL42