Labour's deputy leader appeared to bid farewell to the PM in the House of Commons. 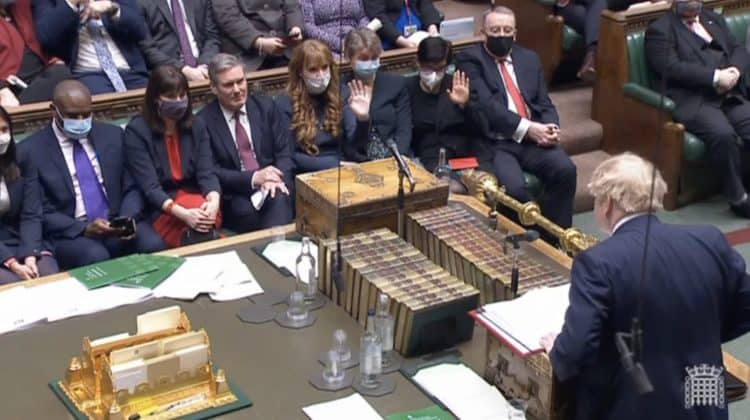 Angela Rayner appeared to bid Boris Johnson farewell in the House of Commons on Wednesday afternoon during a febrile session of Prime Minister’s Questions.

It comes as Johnson was hit by the defection of a Red Wall MP to Labour, as the prime minister battles to save his leadership.

Bury South MP Christian Wakeford said the country needs a government that “upholds the highest standards of integrity and probity”, telling Johnson: “Both you and the Conservative Party as a whole have shown themselves incapable of offering the leadership and government this country deserves”.

His move was announced just minutes before a session of PMQs, with the timing calculated to cause maximum damage to Johnson.

Wakeford won Bury South, which had elected a Labour MP at every election since 1997, in 2019.

He announced his decision in the Bury Times and sent a letter to Johnson explaining why he had lost patience with his leadership.

Wakeford said: “I care passionately about the people of Bury South and I have concluded that the policies of the Conservative government that you lead are doing nothing to help the people of my constituency and indeed are only making the struggles they face on a daily basis worse.

“Britain needs a government focused on tackling the cost of living crisis and providing a path out of the pandemic that protects living standards and defends the security of all.

“It needs a government that upholds the highest standards of integrity and probity in public life and sadly both you and the Conservative Party as a whole have shown themselves incapable of offering the leadership and government this country deserves.”

Wakeford had been one of seven Tory MPs to publicly call for Johnson to quit.

Labour leader Sir Keir Starmer said: “I would like to welcome Christian Wakeford to the Labour Party. He has always put the people of Bury South first.”

He added: “People across Britain face a cost-of-living crisis but this incompetent Tory government is asleep at the wheel, distracted by a chaos of its own making.

“Meanwhile families, businesses and pensioners are suffering from the Conservative failure to tackle rising food, fuel and energy prices.”