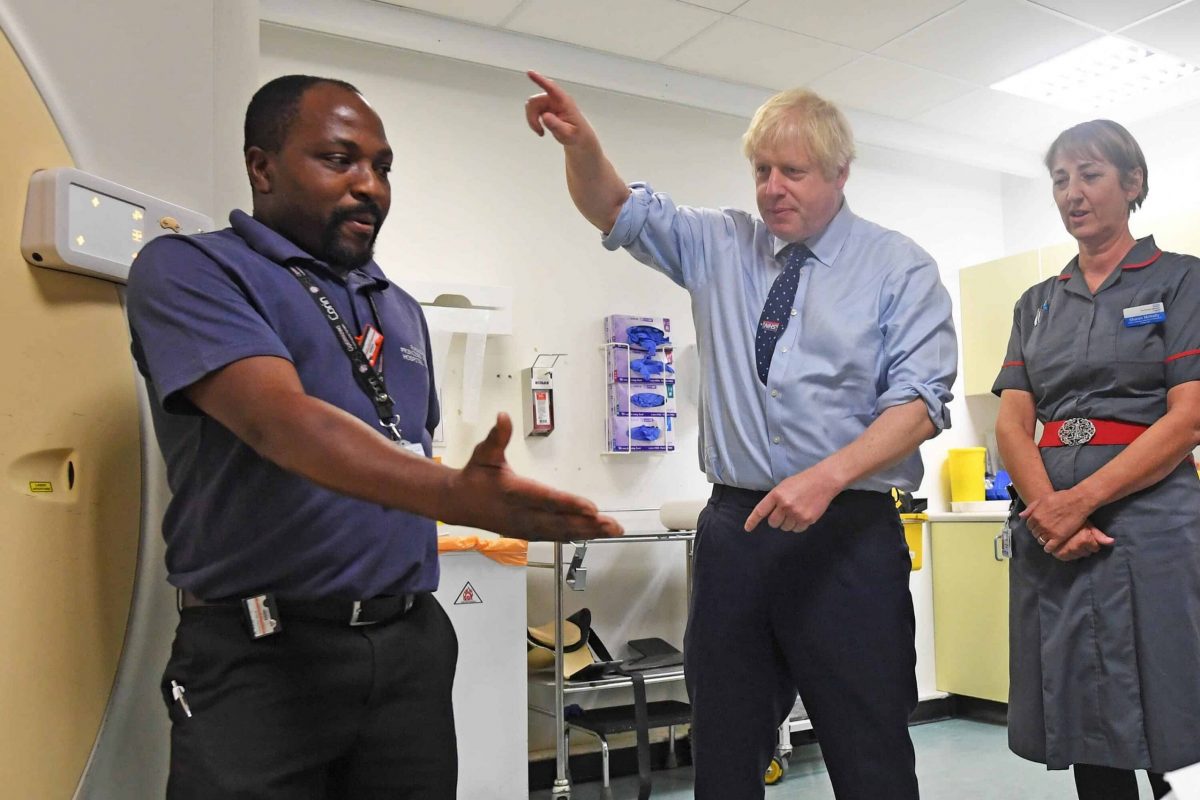 The Conservative Party leader said it was “impoverishing political debate” if such descriptions could not be used.

The so-called Benn Law demands the PM requests an extension to the divorce negotiations if a Brexit deal has not been secured by October 19.

Mr Johnson has regularly dubbed the legislation – drafted and voted through against the Government’s will – as the “surrender act”.

He has faced calls from the Opposition and from more than 100 bishops to tone down his language following death threats issued to MPs this week.

But speaking during a hospital visit in Essex, Mr Johnson said: “I think the threats against MPs, and particularly female MPs, are absolutely appalling and we’re doing a lot of work to give MPs the security that they need.

“But then there’s another question which is – can you use words like ‘surrender’ to describe a certain act or a certain bill?

“And quite frankly I think that you can, and if you say that you can’t, then you’re kind of impoverishing the language and impoverishing political debate because after all, the use of that kind of metaphor has been going on for hundreds of years.”

Cabinet ministers paved the way for the PM’s refusal to row back on using the term, with International Development Secretary Alok Sharma telling BBC Radio 4’s Today programme that the Benn Law was a “form of capitulation” to Brussels.

Mr Johnson concurred with his Secretary of State’s comments at Princess Alexandra Hospital in Harlow, where he was announcing cash for new NHS cancer scanners.

Asked by reporters whether he was looking to find a way to get round the instruction to extend the Article 50 deadline, he said: “No, I must say that we will obey the law but we’re confident that we can come out on October 31 and the best way to do that is to get a deal.

“And so that’s why the surrender act is so damaging. I won’t hide it from you, it has had the effect with our European friends of making them think, ‘Hmm, maybe Parliament can block this thing, maybe they will be forced to extend’.

“If you’re in a negotiation, that obviously makes it more difficult but we are still cautiously optimistic that we can do it.”

The language being used by Mr Johnson came in for stinging criticism from Amber Rudd, a former member of his Cabinet, who said his words “incite violence”.

She quit this month as work and pensions secretary and resigned from the Tory Party after accusing the PM of purging moderates from the Government benches.

“It’s the sort of language people think legitimises a more aggressive approach and sometimes violence,” she told the Evening Standard.

Sir John Major raised fears on Thursday evening that Mr Johnson could look to circumvent the terms of the Benn Law by using Privy Council privilege.

The former Tory prime minister suggested the Government could seek to bypass statute law by passing an Order of Council – an order that can be issued by ministers serving as privy councillors – to suspend the Act until after October 31 without involving the Queen.

“It would be a piece of political chicanery that no-one should ever forgive or forget,” he warned.

Mr Sharma and Tory Party chairman James Cleverly refused to deny the tactic could be used but Downing Street said it did not “recognise” the fears flagged by Mr Johnson’s predecessor.

“I’m sure that the fact these comments were going to be made came as a surprise to everyone because it is simply not something that we recognise,” said the Prime Minister’s official spokesman when asked why ministers had not rebutted Sir John’s comments.

“It is absolute nonsense and (I have) absolutely no idea where he has got it from. Total cobblers. We will not use it.”

Retweeting a journalist saying “Corbyn or someone else” should be installed after a vote of no confidence (VONC) in the Government, SNP leader Nicola Sturgeon wrote: “Agree with this. VONC, Opposition unites around someone for sole purpose of securing an extension, and then immediate general election.”

She added: “Nothing is risk free but leaving Johnson in post to force through no deal – or even a bad deal – seems like a terrible idea to me.”

Scottish Conservative MP Kirstene Hair said it was proof that “SNP MPs will happily prop up Jeremy Corbyn in Number 10”.

The Angus MP warned it would pave the way for a second independence referendum in Scotland.