Labour has said the prime minister "might have misled" MPs over the Christmas party affair. 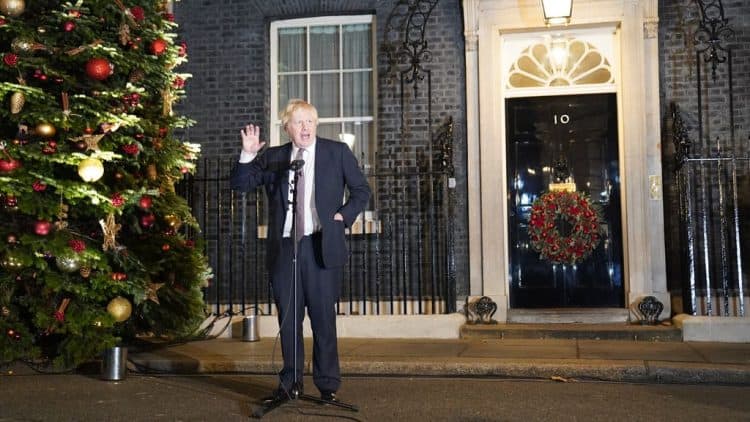 A Whitehall investigation into potentially lockdown-breaking Christmas parties could examine Boris Johnson’s participation in a festive quiz, the Health Secretary has said.

The Prime Minister is facing calls to respond to claims that he broke coronavirus rules, with Labour claiming he might have misled Parliament.

Sajid Javid said it would be up to Cabinet Secretary Simon Case to decide whether to include the quiz in his inquiry into parties reportedly held in the winter of 2020.

An image published by the Sunday Mirror shows the Prime Minister flanked by colleagues, one draped in tinsel and another wearing a Santa hat, in the No 10 library.

Javid told Sky News: “I saw the photo of that quiz, like anyone else. What I can see is it’s a virtual quiz with the Prime Minister sitting at his desk.”

He added: “I don’t know all the details. What I can see (is) it’s a virtual quiz.

“And Simon Case has been given a broad remit to investigate anything that he thinks… any type of gathering in Downing Street that should be looked at on any particular day he wants to.

“And so if he wants to look at this he will – that’s going to be a decision for him.

“It’s not right, I think, for a minister to tell him what he should or should not investigate.”

Labour said the Prime Minister “might have misled” MPs after he told the Commons he had been given assurances that social distancing regulations were not broken by No 10 last year.

Sir Keir Starmer said it is “very hard” to see how the Tier 2 rules could have been adhered to in the quiz.

Official guidance set out that there should be no work lunches or parties “where that is a primarily social activity” and they were not exempted for “work purposes”.

Asked on BBC Breakfast why Sir Keir stopped short of calling for Johnson to resign, instead saying he is “unfit to lead”, Lammy said: “Well, that must, in the end, be a matter for the Prime Minister.”