The prime minister's former spokesperson has resigned after being caught on video laughing and joking about a rule-breaking party - surely the leader of the House should resign too? 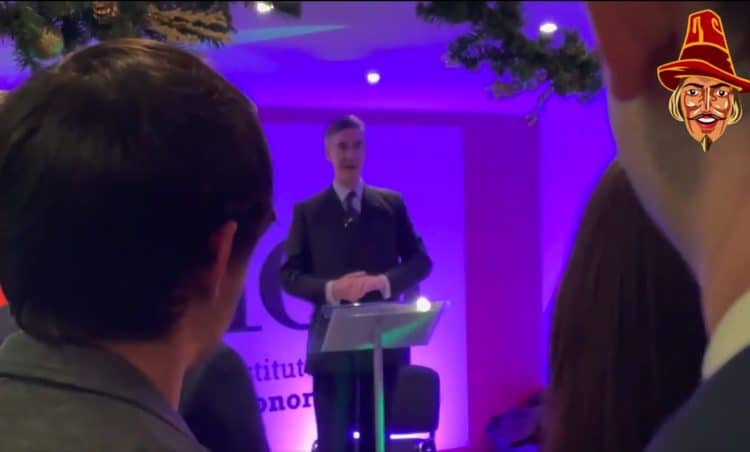 Jacob Rees-Mogg has defended making a joke about Christmas parties and Covid regulations amid calls for him to resign.

The Commons Leader was caught on camera making light-hearted remarks about how the think-tank event he was attending would not be “investigated by the police in a year’s time” – a nod to allegations related to socialising in Downing Street while Covid restrictions were in place.

Mr Rees-Mogg also paid tribute to Prime Minister Boris Johnson’s former aide Allegra Stratton, who resigned after footage emerged of her joking about a Christmas party at a mock press conference days after the alleged event.

Cabinet Secretary Simon Case has launched an investigation into what happened on December 18, 2020 in Downing Street, and two other alleged parties.

Labour’s shadow Commons leader Thangam Debbonaire said it is a “very bad look indeed for a group of male politicians to let a female staffer take the rap”, and asked Mr Rees-Mogg if he would apologise for making a joke about parties.

Ms Debbonaire said that judging by Mr Rees-Mogg’s comments in a video of him speaking at an Institute of Economic Affairs event, “it does rather seem that he also thinks it’s all been a bit of a joke”.

She said: “Would he also agree that it really is a very bad look indeed for a group of male politicians to let a female staffer take the rap for the mess?

“She laughed, he laughed. She’s apologised and resigned. What’s he going to do?”

Mr Rees-Mogg, in his reply, said: “What I was saying was how nice it was to be free of restrictions so that we can have parties this year.

“That was what I was being pleased about, as opposed, in comparison to last year. And this has got better because of what the Government has done.”

“The Leader of the House also this week has been caught on video laughing and joking about rule-breaking whilst giving a speech at a lectern.

“She resigned. Surely the Leader of the House should resign too, or isn’t it another case of ministers in this Government believing it’s one rule for them and another rule for everyone else?”

Mr Rees-Mogg replied: “I’m not sure he’d like to come to the Institute of Economic Affairs, it talks too much sense for him possibly to be able to cope with it.

“But he’d be very welcome to come to their future events and see what goes on and how nice it is, which I was celebrating, that we’re back together having parties without restrictions.

“That is something that is extremely welcome.”