The two leaders had very different ideas of when a post-Brexit trade deal would be completed. 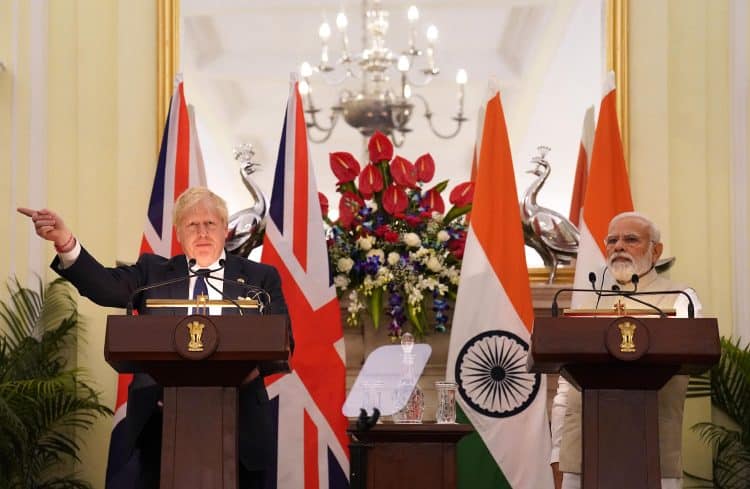 Boris Johnson has told his post-Brexit negotiators to get a trade deal with India “done” by the autumn – despite Narendra Modi appearing lukewarm about the idea.

The pair released a joint press statement after meeting in Delhi on Friday, in which they said there had been progress towards striking a trade deal.

But Johnson has set a date for success in talks by Diwali, the holy festival which will be celebrated in October this year.

Speaking alongside Modi, Johnson said “we’ve already closed four chapters” of the deal. “As the next round of talks begin here next week, we’re telling our negotiators, get it done by Diwali in October,” he added.

But Modi appeared cooler on Johnson’s deadline, saying that “good progress” has been made but adding: “We have decided to make all efforts to conclude the FTA by the end of this year”.

Johnson conceded there would be “difficult issues” ahead, including on tariffs, particularly whisky. He was also open to accepting higher levels of migration from India to take skilled jobs in Britain.

Elsewhere in the press conference, Johnson said he did not try to encourage Modi to go further in dropping India’s neutrality over Vladimir Putin’s invasion of Ukraine.

But India’s foreign secretary Harsh Vardhan Shringla said Johnson put no pressure on Modi over his position on Russia’s invasion of Ukraine.

India has declined to be publicly critical of its former Cold War ally Russia and has abstained from voting in United Nations resolutions condemning Moscow.

Johnson acknowledged India’s “historic relationship” with Russia going back to the Cold War and said “they’re not going to change that” when asked whether he applied pressure on Modi.

The prime minister sought to downplay India’s neutrality, saying Modi has asked the Russian President “what on earth he thinks he is doing” in one of “several” interventions.

Johnson said India and Britain can do more together on “autocratic coercion” from others, but Johnson repeatedly stressed that India is a “great democracy” when asked about widespread concerns that the country is sliding towards autocracy under Modi.