The figures were projected on to one of his Scottish golf courses. 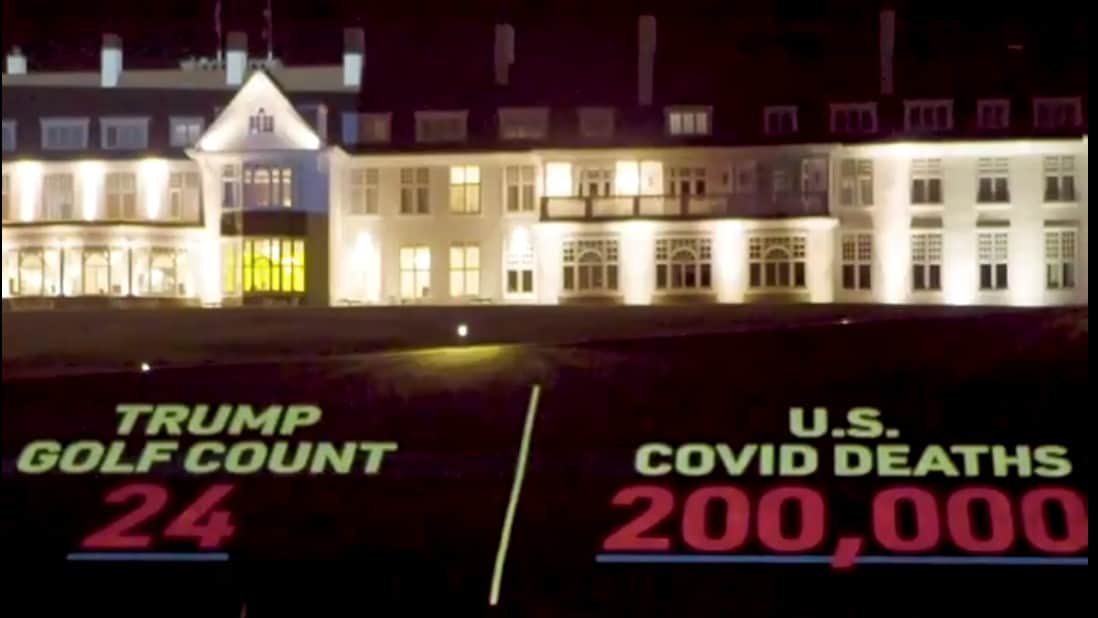 An illumination showing the number of times Donald Trump has played golf during the coronavirus pandemic and the total Covid-19 deaths in the United States has been projected on to one of his Scottish golf courses.

Footage of the increasing tally outside the US president’s Trump Turnberry resort was posted by the Led By Donkeys campaign.

As the number of deaths linked to coronavirus in the US rises towards 200,000, a date flashes up with the date of when the president has played a round of golf, adding to the corresponding total.

The video is accompanied by a soundtrack of Mr Trump criticising his predecessor Barack Obama for golfing while president and – during his first election campaign – claiming he would not have time to play golf if he was elected.

It concludes with the audio of Mr Trump saying: “When you’re in the White House, who the hell wants to play golf?”

Mr Trump last played at his Ayrshire resort in 2018 during a four-day trip to the UK – a visit that cost more than £14.2 million to police.

Thousands of protesters gathered outside the golf course while the president played but Police Scotland later praised the demonstrators for their good behaviour.

Before that, Mr Trump last visited Turnberry in 2016 to reopen it after a multimillion-pound refurbishment.

At the time, he was the presumptive Republican presidential nominee and staff at the course wore caps with the message “made Turnberry great again”, in a nod to his campaign slogan.

Turnberry became his second golf course in Scotland after Trump International Golf Links in Aberdeenshire, the construction of which was marred in controversy as he clashed with residents, environmental campaigners and politicians.

The Balmedie course eventually opened in 2012.