By Tomas McGoldrick Northern Ireland has often been accused of being behind the times, but in one area we seem to be ahead of the curve. The recent European elections have seen a surge in support for anti-immigrant, xenophobic parties. In Britain UKIP dominated the headlines by topping the poll, yet in Northern Ireland they […] 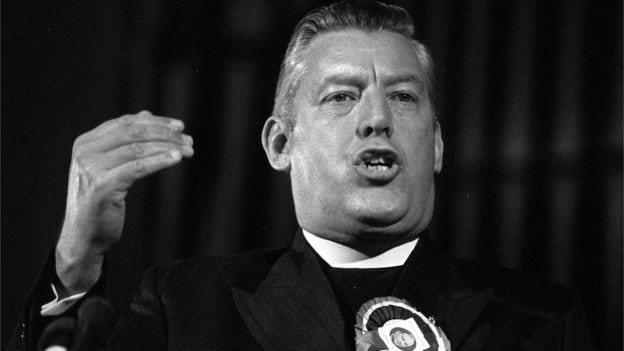 Northern Ireland has often been accused of being behind the times, but in one area we seem to be ahead of the curve. The recent European elections have seen a surge in support for anti-immigrant, xenophobic parties. In Britain UKIP dominated the headlines by topping the poll, yet in Northern Ireland they managed only 3.9 per cent of first preference votes.

One of the reasons why they may have failed to make much inroad in Northern Ireland is that the dominant party, the DUP, has shown itself able to match the intolerant and anti-immigration message of the other right-wing European parties.

Pastor James McConnell of the Metropolitan Tabernacle recently caused controversy with a sermon denouncing Islam as ‘heathen’ and ‘satanic’. He would not trust any Muslims who follow what he calls ‘sharara’ law. If this statement was made anywhere else in the UK you would expect condemnation from politicians, however Peter Robinson, the First Minister, and other leading figures in the DUP were quick to offer support to McConnell. Robinson confirmed that he too would not trust Muslims who follow sharia law either, except to ‘go down the shops’ for him.

The context of this is disturbing, as racist incidents in the north of Ireland are on the increase.

Figures from the Human Rights & Racial Equality Benchmarking report show an increase in the number of racist incidents reported to police from 750 last year to 982 this year. Although these incidents have been reported in both loyalist and republican areas, the majority are occurring in areas with a strong loyalist paramilitary presence, such as east Belfast. Walls are regularly daubed with graffiti saying ‘locals only’ and ‘blacks out’.

Recently Michael Abiona, a Nigerian man, was allocated a council house in the east of the city, he was met with protesters outside his house and banners proclaiming ‘locals residents only’ and ‘local housing for local people’. Again you would expect condemnation from the political leaders of these communities and again Peter Robinson has come out in support of the protests, saying “there is that resentment that people from outside their local area are getting houses and that they can’t get their children housed close to them”. Being from the area seems to be a more important criteria for housing than any genuine need.

It is true that there has been a significant backlash in Northern Ireland against Peter Robinson and the DUP, with several anti-racist rallies in Belfast and Derry. Whether this will lead to them losing votes in any number remains to be seen.

Part of this attitude can be explained by the sectarian nature of council housing in Northern Ireland, the importance of only giving housing in a particular area to ‘local people’ is due to the fear that ‘the other side’ could start to take over the area. There are a large number of Catholic families who need council housing in the nationalist areas of north Belfast, yet the DUP are focusing on building housing in the unionist parts of the district. In a city where voting is almost exclusively along tribal lines, building houses for those in greater need can directly lead to you losing votes. It may also create potential flashpoints for Orange parades through what were once unionist areas. This mindset is now affecting immigrants in need of housing and giving the north the reputation as an unwelcoming society.

Should this worry anyone in Britain? It’s easy to dismiss what goes on in Northern Ireland as irrelevant, yet people in Britain may soon get to know the DUP more than they may have liked to. The Tories are loath to go into another coalition with the Lib Dems, so have been casting their eye about for potential coalition partners in the likely event that they won’t secure a majority in next years general election. With eight MPs the DUP are the fourth biggest party in Westminster and may be able to give David Cameron the majority he needs. The DUP would seem like natural bedfellows for those on the right-wing of the Tory party, as well as their anti-immigrant and Islamophobic tendencies, they have blocked equal marriage, banned blood donations from gay people and have challenged the right of gay people to adopt children in Northern Ireland.

Those in Britain concerned by the rise of UKIP should be equally worried by the possibility of a Conservative-DUP coalition next year, the right-wing ‘nutters’ may get into government by the back door.