The former Tory leader advised a hand sanitiser company - while chairing a government taskforce which changed rules to benefit them. 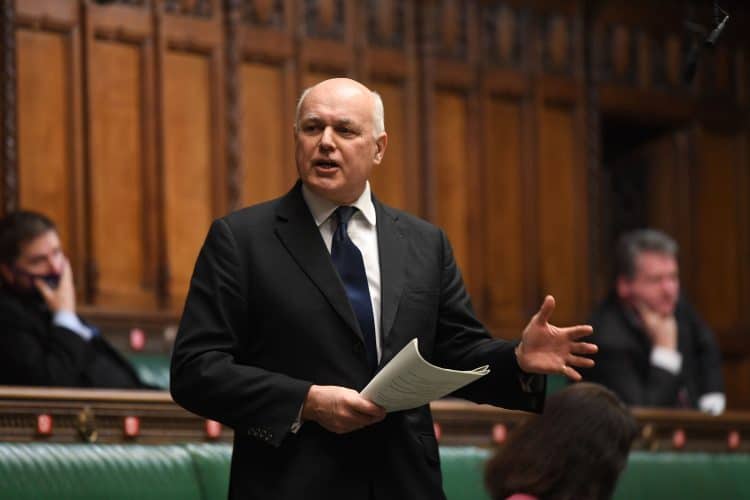 Iain Duncan Smith is under fire over his £25,000-a-year second job advising a multimillion-pound hand sanitiser company, after he chaired a government taskforce that recommended new rules which benefitted them.

The former Conservative party leader chaired the Task Force on Innovation, Growth, and Regulatory Reform, which reported back in May after being asked by Boris Johnson to recommend ways of cutting EU red tape.

But the renewed focus on moonlighting by MPs has prompted questions about the Taskforce’s recommendations that alcohol-free hand sanitisers should be recognised as suitable for use in the UK, The Guardian reported.

The report did not mention Duncan Smith’s relationship with Byotrol – which provides the NHS with 92 per cent of its non-alcohol sanitiser, and retains the Tory backbencher as an adviser on a £25,000 salary.

In a message to investors following Duncan Smith’s recommendations, Byotrol hailed how an “influential UK government-sponsored Taskforce has recommended a regulatory ‘green light’ for alcohol-free sanitisers” – adding that it had given a “powerful boost” to the firm.

The taskforce said in its report: “Current guidelines in the UK on non-alcohol based hand sanitisers are unclear. As a result, there is confusion in industry and among consumers as to what products are safe and effective to use, and we may be unnecessarily limiting the range of sanitising products available.” It called on the government to review guidance “to place alcohol- and non-alcohol-based on a level playing field”.

Duncan Smith was a director of Byotrol between June 2009 and May 2010, and has previously declared share options.

Angela Rayner, Labour’s deputy leader, told The Guardian: “The prime minister needs to explain why he think it is justified for one of his MPs to be paid by a company that stands to benefit from a recommendation of a taskforce chaired by that same MP. This is exactly the kind of brazen conflict of interest that proves that the Conservatives think it is one rule for them and another for the rest of us.

“Did this MP declare an interest when these matters were discussed and reported on by the taskforce? Why is the prime minister failing to act over these glaring conflicts of interest?”

Steve Goodrich, head of research and investigations at Transparency International UK, added: “The informality of a government taskforce might seem like an agile way to develop new policy but without basic governance arrangements it provides an open door to vested interests. If those proposing a major reform [could] benefit from it financially, this should at least be a matter of public record and probably should be subject to independent review.”

Related: ‘We can’t even afford a nanny’: MP explains why second jobs are necessary