A firm based in Hancock's constituency entered the system "informally" because of its connections to the disgraced health secretary. 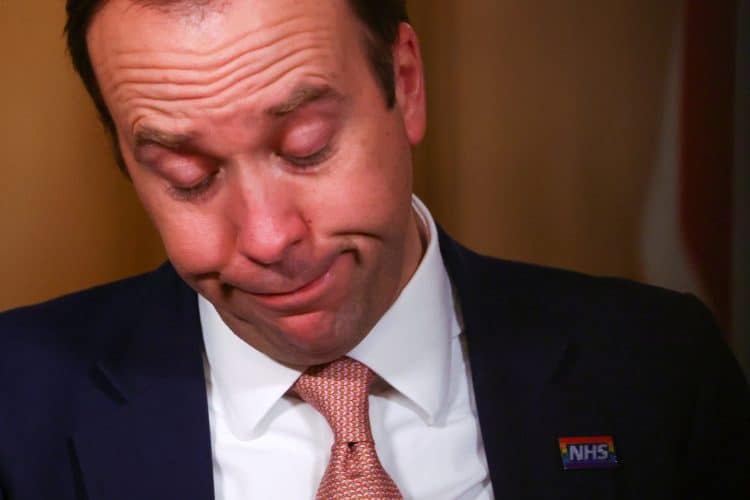 The government handed “VIP treatment” to a Covid testing firm with close ties to Matt Hancock, it has emerged.

Emails seen by the Guardian reveal that the Animal Health Trust (AHT) entered the system for awarding Covid-19 contracts “informally” because the former health secretary was “a good friend” of someone working with the company.

The AHT had a laboratory in Newmarket, in Hancock’s West Suffolk constituency, and much of its work focused on medical care for horses – including for the horse racing industry, to which Hancock has close connections.

Emails between officials within the Department of Health and Social Care (DHSC) contradict denials from officials of the existence of a “fast track” process for companies with political ties seeking public coronavirus contracts.

Hancock resigned the day after photographs of him kissing advisor Gina Coladangelo were published by The Sun newspaper.

In an email on 23 April 2020, a civil servant wrote to health officials working on the scaling-up of testing, saying: “AHT came in direct to SofS [secretary of state] office – someone who works with them is a good friend of his and so they entered the system informally that way … They must have fallen through the records gap if we’ve not got trace of them – they’ve definitely been in touch with us and had VIP treatment.”

The next morning, a senior civil servant wrote: “We definitely need to capture them in the system somehow, so they receive future comms and offers. Owner [sic] is a friend of SofS, lab is in his constituency/area – so he will get direct feedback on our processes!”

Despite the preferential treatment, AHT does not appear to have been given a government contract; the company, which was already experiencing financial difficulties in March last year, went into liquidation in July.

Jolyon Maugham, director of the Good Law Project, said: “It’s just so explicit: civil servants were giving special treatment to friends of the minister. The government flatly denied that there was a VIP process for testing, so what are we supposed to make of all the other denials the government has issued?”

Angela Rayner, Labour’s shadow Cabinet Office minister, called for a “fully independent investigation” into whether there was a VIP fast track process for the test-and-trace scheme.

She said: “This is yet more evidence that we can’t trust a word that Conservative ministers say.”

Last year, a National Audit Office report revealed that the government established a fast-track VIP lane to purchase billions of pounds of PPE from little-known companies with political contacts in the Conservative party.

It found that suppliers with links to Tory politicians were ten times more likely to be awarded contracts than those who applied to DHSC.