The Labour leader delivered a withering takedown of Johnson in the House of Commons. 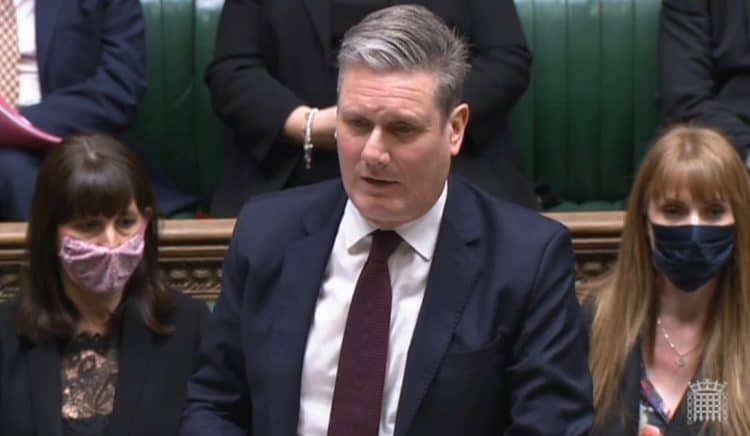 Labour leader Sir Keir Starmer urged Boris Johnson to publish Sue Gray’s report in full – but insisted it is already clear that what she has disclosed so far is “the most damning conclusion possible” in a withering House of Commons speech.

Responding to the report, Starmer told MPs: “The Prime Minister repeatedly assured the House that the guidance was followed and the rules were followed.

“But we now know that 12 cases have breached the threshold for criminal investigation, which I remind the House means that there is evidence of serious and flagrant breaches of lockdown, including the party on May 20 2020, which we know the Prime Minister attended, and the party on November 13 2020 in the Prime Minister’s flat.

“There can be no doubt that the Prime Minister himself is now subject to criminal investigation. The Prime Minister must keep his promise to publish Sue Gray’s report in full when it is available, but it is already clear what the report disclosed is the most damning conclusion possible.”

‘Everybody’s fault but his’

In a sombre and withering statement, the Labour leader: “By routinely breaking the rules he set, the Prime Minister took us all for fools, he held people’s sacrifice in contempt, he showed himself unfit for office.

“His desperate denials since he was exposed have only made matters worse. Rather than come clean, every step of the way he’s insulted the public’s intelligence.

“And now he’s finally fallen back on his usual excuse: it’s everybody’s fault but his. They go, he stays. Even now he is hiding behind a police investigation into criminality in his home and his office.

“He gleefully treats what should be a mark of shame as a welcome shield. But Prime Minister, the British public aren’t fools, they never believed a word of it, they think the Prime Minister should do the decent thing and resign.

“Of course he won’t because he is a man without shame and just as he has done throughout his life, he’s damaged everyone and everything around him along the way.

“His colleagues have spent weeks defending the indefensible, touring the TV studios parroting his absurd denials, degrading themselves and their offices, fraying the bond of trust between the Government and the public, eroding our democracy and the rule of law.”

Sir Keir Starmer quoted Margaret Thatcher in noting: “The first duty of government is to uphold the law. If it tries to bob and weave and duck around that duty when it is inconvenient, then so will the governed.

“To govern this country is an honour, not a birthright. It’s an act of service to the British people, not the keys to a court to parade to your friends.

“It requires honesty, integrity and moral authority. I can’t tell you how many times people have said to me that this Prime Minister’s lack of integrity is somehow ‘priced in’, that his behaviour and character don’t matter. I have never accepted that and I never will accept that.

“Whatever your politics, whatever party you vote for, honesty and decency matter. Our great democracy depends on it, and cherishing and nurturing British democracy is what it means to be patriotic.”

In a bizarre response, Johnson accused Labour leader Starmer of failing to prosecute Jimmy Savile as he hit back at Labour criticism over the Sue Gray report.

He said: “The report does absolutely nothing to substantiate the tissue of nonsense that he has said. Absolute nonsense.

“Instead this leader of the opposition, a former director of public prosecution – who used his time prosecuting journalists and failing to prosecute Jimmy Savile, as far as I can see – he chose to use this moment to continually pre-judge a police inquiry.

“He has reached his conclusions about it. I am not going to reach any conclusions and he would be entirely wrong to do so.

“I have complete confidence in the police, I hope that they will be allowed simply to get on with their job and don’t propose to offer any more commentary about it and I don’t believe that he should either.”