According to recent polling only six per cent of people in Northern Ireland trust the British government. 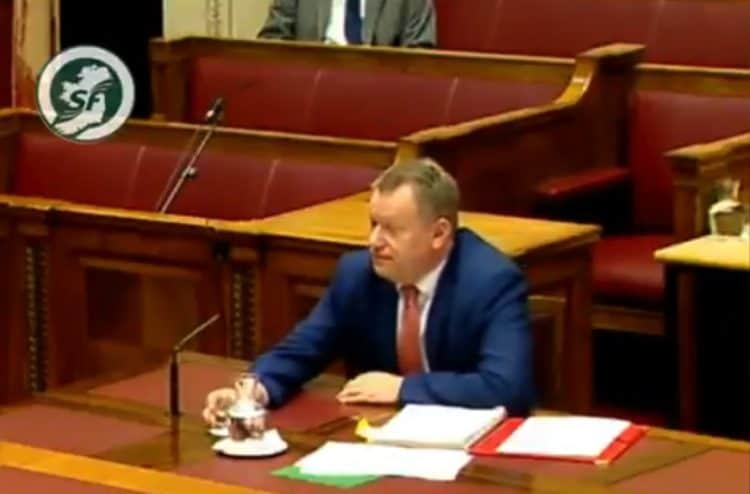 David Frost received a grilling over the Northern Ireland Protocol as he addressed the Stormont Executive committee yesterday.

Appearing in front of the Northern Ireland Assembly he said the UK government does not regard the protocol as ‘definitive’ – despite it forming part of an international treaty signed by the UK.

He argued that the protocol was difficult to operate because it enjoyed only 50/50 support among the Northern Irish public.

In 2016, just 44.2 per cent of people in the country voted to leave the European Union.

This is quite some video.

David Frost told to his face that the people of Northern Ireland voted against Brexit, support the Protocol, want it implemented in full – and do not trust him. ???pic.twitter.com/LwWDzKcdr0

“Asleep at the wheel”

“You were Britain’s chief negotiator for Brexit,” she said.

Frost responded: “You’re absolutely right, I was the trade negotiator in 2019 and 2020”, but maintained “we knew the protocol was unusual in its construct” and insisted it was always planned “as a balance”.

“You have to read all of the provisions together. You can’t take one in isolation. It’s not reasonable to read it as a document which simply requires an EU external border to be established and that’s what’s happening.”

“The reason it’s not working out is because you have not honoured it. We believe that the next agreement you honour will be your first.”

Trust in the government

“People do not trust you, they do not believe you, they want to see the protocol implemented in full.”

The baron conceded that poll “is a salutary one”, but insisted others show “a 50/50” split and “the protocol depended on a broader level of consent if it’s to work”.