The Bury South MP said his decision was about more than just partygate and the prime minister’s ‘disgraceful’ behaviour. 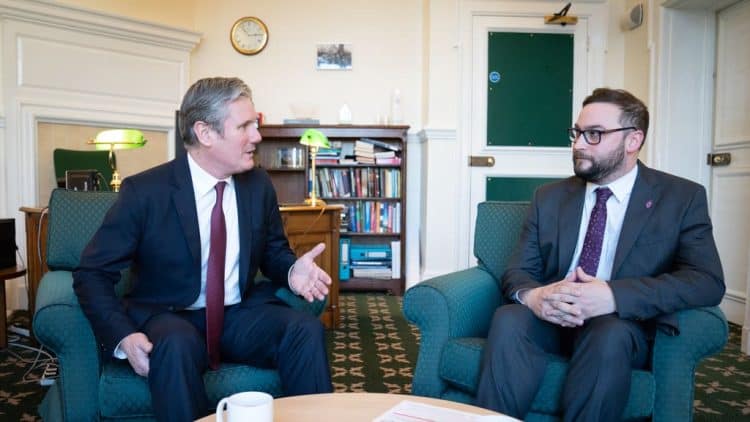 A Red Wall MP has branded Boris Johnson “disgraceful” as he defected from the Tories to Labour.

Bury South MP Christian Wakeford said the country needs a Government that “upholds the highest standards of integrity and probity”, but told Mr Johnson “both you and the Conservative Party as a whole have shown themselves incapable of offering the leadership and Government this country deserves”.

His move was announced just minutes before a session of Prime Minister’s Questions, with the timing calculated to cause maximum damage to Mr Johnson.

Mr Wakeford won Bury South, which had elected a Labour MP at every election since 1997, in 2019.

He told reporters in Westminster it was “the most difficult decision I have ever had to make” and followed months of soul-searching.

While the row over Downing Street parties had been the final straw, Mr Wakeford also highlighted issues including the provision of free school meals, the row over Dominic Cummings’ behaviour during lockdown, the cost-of-living crisis and the Owen Paterson affair.

“There’s been far too many issues where I’ve felt we’ve been on the wrong side,” he said.

At the moment the Tories were “trying to defend the indefensible and they are doing so gladly”.

In his resignation letter to Mr Johnson, the MP said: “Britain needs a Government focused on tackling the cost-of-living crisis and providing a path out of the pandemic that protects living standards and defends the security of all.

“It needs a Government that upholds the highest standards of integrity and probity in public life and sadly both you and the Conservative Party as a whole have shown themselves incapable of offering the leadership and Government this country deserves.”

He added: “My decision is about much more than your leadership and the disgraceful way you have conducted yourself in recent weeks.”

Mr Wakeford had been one of seven Tory MPs to publicly call for Mr Johnson to quit, so there will be some comfort to the Prime Minister from the fact there is now one less letter of no confidence with 1922 Committee chairman Sir Graham Brady.

Mr Wakeford was cheered by Labour MPs as he arrived in the Commons chamber for Prime Minister’s Questions and sat behind Sir Keir Starmer.

But the Prime Minister told Sir Keir: “The Conservative Party won Bury South for the first time in a generation under this Prime Minister on an agenda of uniting and levelling up and delivering for the people of Bury South. We will win again in Bury South.”

Culture Secretary Nadine Dorries said Mr Wakeford “has yet to realise that the Union Jack mask he is wearing to cross the floor to Labour is not welcome on that side of the house”.

A statement on Young Labour’s Twitter account said: “Christian Wakeford MP should not be admitted to the Labour Party.

“He has consistently voted against the interests of working-class people; for the £20 Universal Credit cut, for the Nationality and Borders Bill and for the Police and Crime Bill. Young Labour does not welcome him.”

The Corbynite Momentum campaign group also said Mr Wakeford “should be nowhere near the Labour Party”.

Mr Wakeford’s decision to cross the floor led to calls for him to trigger a by-election.

In 2020 he supported a backbench bill that called for any MP who switches parties to face a recall petition.

Asked whether there should be a by-election, the Prime Minister’s press secretary said: “I think that that is up to the constituents of Bury South.”