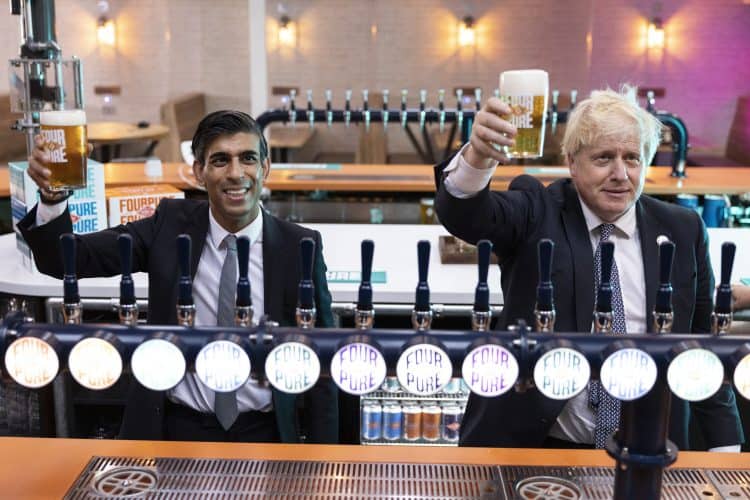 A large number of Brits believe Brexit is one of the top factors threatening their Christmas booze supply, new polling has revealed.

It comes amid stark warnings over Christmas shortages, as an acute supply chain crisis continues to blight Britain.

Bottles of alcohol could be missing from dinner tables this festive season unless ministers do more to address the HGV driver shortage, a group of 48 wine and spirits companies warned this week.

The Wine and Spirits Trade Association (WSTA) has written to Transport Secretary Grant Shapps telling him companies are still struggling to get drinks to customers and urged ministers to “ease the burden”.

In the letter, signed by major brands including Moet Hennessy, Pernod Ricard and Campari, they wrote: “Businesses are still struggling, and further action is needed, particularly now in the run up to Christmas – a critical trading period for our sector.”

It added: “This is an urgent issue for our businesses, and it is imperative that government takes immediate steps to help mitigate the impact of the driver shortages crisis before the Christmas period.”

And a new poll by Opinium, carried out on behalf of campaign group Best for Britain, some 37 per cent of Brits cited Brexit as the top reason for the UK’s ongoing supply issues, behind only the coronavirus crisis (43 per cent).

In Scotland and Northern Ireland, Brexit is seen as most culpable for the impending Chrismas chaos, with 43 per cent and 46 per cent ranking it first respectively compared to 39 per cent and 30 per cent in these nations primarily blaming the virus.

WSTA bosses warned that the cost of freight had jumped by around seven per cent to retain drivers, and delays at ports were hampering efforts for shipments to arrive quickly.

They added: “Drivers and vehicles are increasingly unpredictable in their arrival times, meaning goods are either not ready or are left waiting for collection.

“As a particularly competitive industry, the inability to fulfil orders in a timely manner can result in the loss of business, as products can be easily replaced by comparable products from elsewhere in the world. This is distinctly true for supplying goods to Northern Ireland.

“While businesses are doing their best and being as flexible as they can, this loss of certainty and predictability is hugely damaging for their supply chain and ultimately their bottom line, consumers and tax revenue.

“There is only so much businesses can do without having to increase costs for consumers.”

Dr Philippa Whitford, the SNP MP for Central Ayrshire, who sits on the UK Trade and Business Commission, said: “The prime minister might try to hide behind the pandemic but the Scottish people know that it is their shambolic hard Brexit deal that has left us with empty shelves, facing the prospect we may not even be able to enjoy a glass of wine or a dram this Christmas. This self-made crisis cannot be ignored any longer.”

Naomi Smith, CEO of Best for Britain, added: “It’s clear the pandemic has had an impact on supply chains around the world, but after a series of boom and bust lockdowns followed by the ‘pingdemic’ we have to ask why it is only Britain that is experiencing acute shortages both in goods and labour.

“Johnson’s threadbare Brexit deal combined with the pandemic has been a double hit on our supply chains leading to serious shortages this Christmas. It’s time the government renewed its gin membership.”

Related: Brexit is ‘the real reason’ Patel was barred from France