The Grenfell Tower tragedy shocked the nation, and a full enquiry is underway. But, if lessons from the Lakanal Tower block fire in Camberwell in 2009 didn’t effect change, what hope can we have that Grenfell will? Are the lessons from social housing tower block fire tragedies being ignored? Many aren’t convinced that lessons have […]

by Sam Allcock
in Opinion, Politics 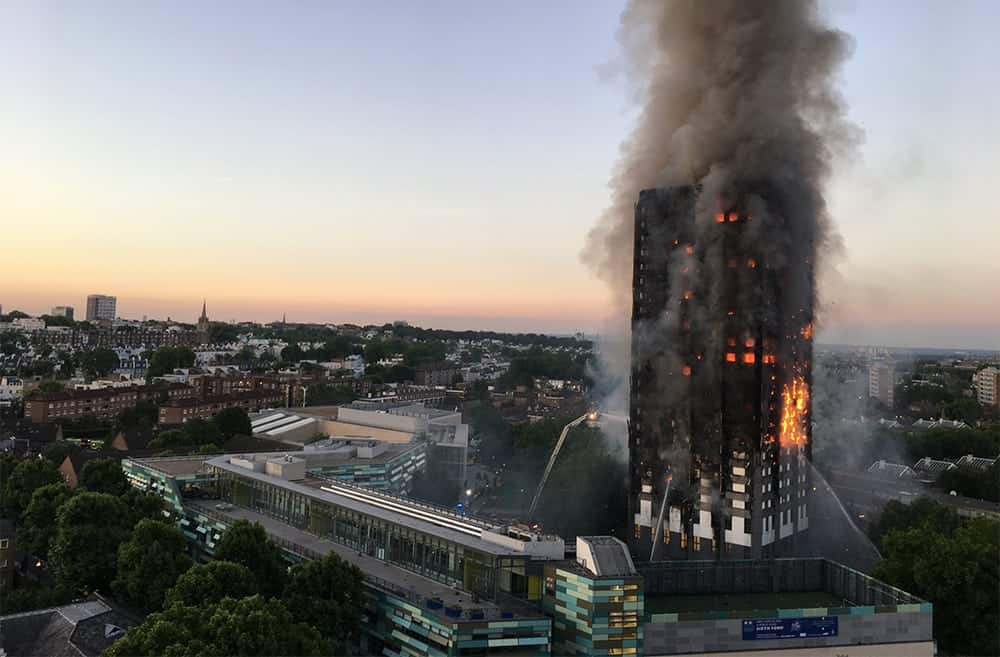 The Grenfell Tower tragedy shocked the nation, and a full enquiry is underway. But, if lessons from the Lakanal Tower block fire in Camberwell in 2009 didn’t effect change, what hope can we have that Grenfell will? Are the lessons from social housing tower block fire tragedies being ignored?

Many aren’t convinced that lessons have been learned, and confidence in the Grenfell Inquiry amongst the surviving local community is at an all-time low. Musician, and Grime star, Stormzy brought renewed attention to the Grenfell inquiry at the recent BRIT Awards with his lyrical attack on Theresa May. “Theresa May where’s the money for Grenfell? / What you thought we just forgot about Grenfell?” He branded her a criminal.

Since the Grenfell Tower fire in London’s North Kensington last June, there have been repeated calls from those in the fire safety industry for the mandatory retrofitting of fire sprinklers in all residential high-rise buildings. So far, some councils have responded positively, taking it upon themselves to fund the fire safety projects. Others are stalling, because the question of funding still hasn’t been addressed.

A fire in Southampton at Shirley Towers in 2010 killed two firefighters. An inquest found they had become overwhelmed by heat and entangled in fallen cables.

Following the tragedy, changes were made to the British Standard wire safety regulations requiring electrical cables to be mounted in metal trunking instead of plastic. The change was recommended by coroner Keith Wiseman following an inquest into the firefighters’ deaths in 2013. Fallen cables were also highlighted as a factor in the deaths of two firefighters at Harrow Court in Stevenage, Hertfordshire, in February 2005.

The issue of fire sprinklers was also raised at the time of the 2013 inquest. The coroner said: “Social housing providers should be encouraged to consider the retrofitting of sprinklers in all existing high-rise buildings in excess of 30 metres in height.”

Lessons from Lakanal House could have prevented the Grenfell tragedy

Fundamental lessons from the Lakanal House tower block fire in 2009 that killed six people were not heeded. This is despite the fact that the London Fire Brigade successfully prosecuted Southwark Council for fire safety failings. The council was given a £270,000 fine and ordered to pay £300,000 court costs after pleading guilty to four offences under the Regulatory Reform (Fire) Safety Order at Southwark Crown Court in February 2017.

The dire consequences of building regulations failing to protect those living in high-rise social housing blocks from fire were clear for all to see. The Lakanal House fire claimed lives largely because of botched and unsafe renovation work and a council’s failure to inspect the building.

The Government did not act upon recommendations following the Lakanal fire. This meant that 4,000 tower blocks across the country were not retrofitted with sprinkler systems and a lax regulatory framework around fire safety assessments remained in place.

A sprinkler system is one of the most effective tools in preventing the spread of fire in any building, but building regulations in the UK determine that only buildings constructed since 2007 and which are taller than 30m are required to have sprinklers fitted. This regulation wasn’t required retrospectively so did not apply to the aforementioned social housing blocks that met with tragic consequences.

In 99 per cent of cases, sprinkler systems extinguish or contain fires. Dany Cotton, commissioner of the London fire brigade, has repeatedly said sprinklers must be installed in tower blocks.

The trust in fire-safety regimes in the UK has been broken, particularly when it comes to high-rise social housing. It is up to government to take responsibility for a social housing system that has suffered the effects of cuts for far too long.

The evidence for the effectiveness of fire sprinklers in saving lives and in reducing the financial cost of fire damage is overwhelming. What more will it take for the government to listen?

Some positive news, but who will pay?

Research carried out by Insider Housing at the end of last year found that half of England’s social housing high rises could have sprinkler systems retrofitted as councils and housing associations spend hundreds of millions on fire safety works.

David Orr, chief executive of the National Housing Federation, spoke to Insider Housing. He said the figures demonstrate that “all of the necessary remedial works that need to take place across the country constitute a large-scale national programme of work”.

Even before updated building regulations and fire safety rules are introduced, emergency checks, fire wardens, repairs and safety improvements are likely to cost well over £1bn.

The British Automatic Fire Sprinkler Association (BAFSA) is urging the government to take immediate action to actively promote, through legislation and regulation, retrofitting of automatic fire sprinklers in high-rise housing throughout the UK as the only effective measure to compensate for single staircases, combustible external cladding and poor standards of fire compartmentation.

BAFSA warns against a rush to install something quickly, which may result in systems being provided that are not fit for purpose.

Letting local councils foot the bill for decades of under-investment in our social housing system isn’t the answer. High-rise fire safety needs a central solution by way of regulation, and it requires a commitment from government for funding. If we want to prevent a tragedy of this scale happening again, it is time for the government to take action.