Look at it. Horrifying, right? That eccentric, brazen, cigar smoking, rosy cheeked toff wedged in between two show girls and John McCririck. As harmless as it looks from the outset this picture could well be the face of post-Brexit Britain, and I for one want to get off. It’s like a bad dream. New bookie […] 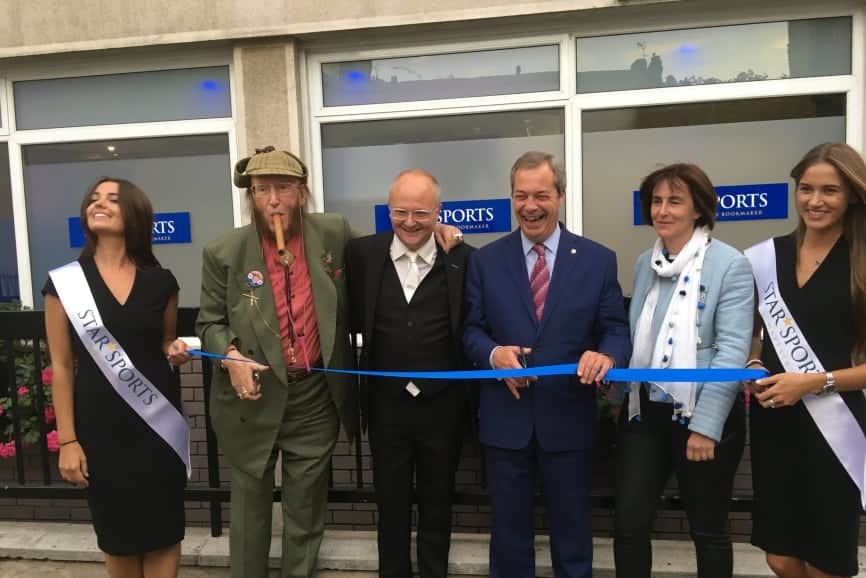 Look at it. Horrifying, right? That eccentric, brazen, cigar smoking, rosy cheeked toff wedged in between two show girls and John McCririck. As harmless as it looks from the outset this picture could well be the face of post-Brexit Britain, and I for one want to get off.

It’s like a bad dream. New bookie moves into Mayfair and invites a Conservative’s wet dream along to cut the ribbon and sip bubbles as the rest of the UK figures out what to do about the biggest economic and political cock-up in history.

The person who engineered our narrow-minded, xenophobic, nationalistic exit from the European market is stood outside some shite bookie parading it in our face, and he’s actually been paid for it. He’s been celebrated as ‘positive PR’ exposure for the brand. Like seeing him next to the pound slot machines is enough to persuade people to go bet there.

If Farage endorsed my brand I’d liquidate it before he could say Brexit. But then I suppose he might suit a company that lays money on horses that get whipped up and down racetracks until they take a tumble and get shot in the head. He also probably suits punters in a part of London that celebrates inequality and don’t give two hoots how a withdrawal from the single market might impact other people.

So bravo Ben Keith – the stubby little Iain Duncan Smith lookalike in the centre – and may I extend my best wishes for Star Sports’ new venture in Mayfair. Just when you re-read that sentence back make sure to replace ‘best wishes’ with “sincere hope that it crashes and burns to the ground”.