Johnson's classic sloganism is miring British politics, and his disdain for detail has thrust the country into a transient downward spiral. 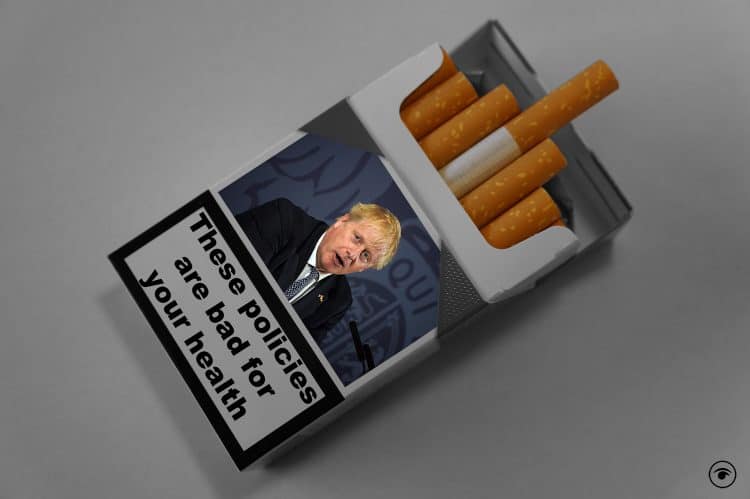 Good morning. Boris Johnson’s landmark food strategy for England, aimed at tackling the soaring cost of food, childhood hunger, obesity and the climate emergency, contains virtually no new measures to do any of that, early analysis of a leaked white paper shows. Among the measures included are proposals to ramp up intensive fish farming practices and increase the amount of “responsibly sourced wild venison” that makes its way to our plates. The strategy has been described as “bordering on preposterous” by Labour, while Greenpeace described it as “worse than half-baked”.

The leaked food strategy, which could spark a mini rebellion in the farming communities of Tiverton and Honiton in the by-election next week, comes during a busy policy week for the Conservatives, who are seizing this moment of relative calm to deliver their agenda. It will give voters the chance to see what the party is made of away from the successive scandals that have rattled the administration without (yet) toppling it.

On Tuesday, the first flight will depart the UK headed for Rwanda with an estimated 30 migrants on board, many of whom will have spent their life savings reaching our shores only to be sent back to a country with a questionable human rights record and bleak economic prospects. When the policy was first announced by Priti Patel, whose own parents arrived in England ‘with literally nothing’, most people thought it was a dead cat policy designed to distract voters from the ongoing Partygate scandal. But, as it turns out, it isn’t. That was actually their idea – to combat people trafficking by, effectively, becoming people traffickers themselves.

Then there is the new housing policy, announced last week, the self-styled ‘Benefits To Bricks’ initiative that shows little more than faux concern for those on low incomes and is shamelessly Thatcherite in its conception. The Conservative’s grand idea to fix the housing crisis and play lip service to their ‘levelling-up’ credentials effectively amounts to giving Universal Credit claimants – who have been pretty occupied with the escalating cost-of-living crisis – the right to buy their own homes in future by “turning benefits into bricks.” While the proposals might sound attractive on the surface, mainly due to their simplicity, all they will succeed in doing – at least without a plan to increase the number of social houses – is choke the supply of affordable housing when homelessness is rising and over a million households are stuck on the waiting list. Genius, right?

You might wonder how plans to deal with food security, immigration and housing can be so woefully hashed out, but the answer is quite simple. Boris Johnson has no interest in the details of his policies. As long as they can fit on the back of a fag packet – send them to Rwanda, turn ‘benefits into bricks’ – then he’s confident he can get voters on side, even the ones who will be poorer for it.

His disdain for the minutiae will be put on a pedestal over the next few weeks in relation to the Northern Ireland Protocol, which was the prime minister’s fag packet solution to one of Brexit’s most pressing problems. Legislation to override parts of the deal will be set out today and could have far-reaching consequences for the UK’s standing on the international stage. But whatever the outcome, the move is mainly symbolic, as it represents the tectonic shift that has occurred within British politics since the Good Friday Agreement was brokered by groups of people who cared about one thing over anything else: detail. Bereft of that, it all comes crumbling down, and so we have seen.