"I am simply glad to be able to keep my life as it had been before a referendum in which I had no say, but turned my life upside down." 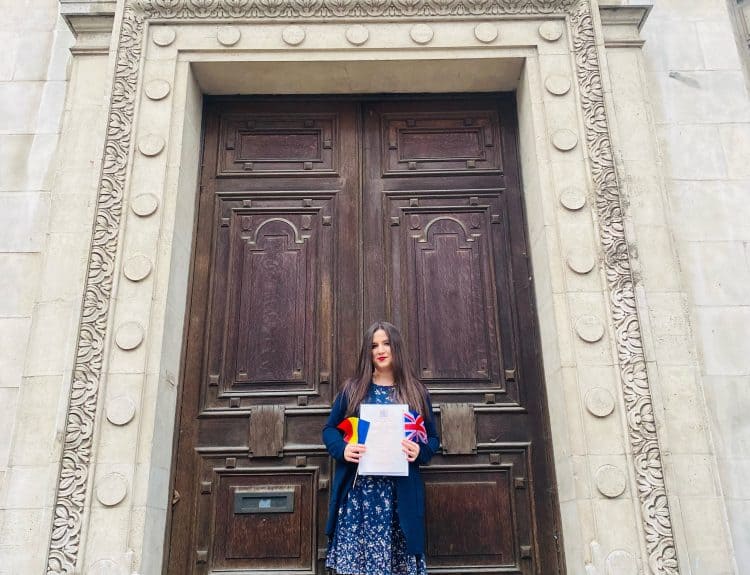 Journalist Andra Maciuca holding her British citizenship certificate and the flags of Romania and the UK. Photo: Andra Maciuca.

This week, a council worker in Essex declared me a British citizen and said I was now welcome as part of the community, seven years after I first moved to the UK from Romania.

Minutes before, waiting for the ceremony to begin, another soon-to-be Brit asked why we weren’t allowed to bring a guest, or even take photographs of the moment our citizenship was confirmed. Another council worker replied that these were the times we live in. “But,” she said, excitedly turning to a room of two-dozen people, “at least you get to be British, yay!” We smiled – somewhat forcibly.

Those two statements crystallised how I have often felt in the seven years since I moved to the UK, aged 18. That I should be grateful for being allowed to live, study and work here – and that I wasn’t really welcome until I became British on paper.

At school, I loved studying English. I started learning it at the same time as Romanian, and deliberately chose a high school where I could study more English than Romanian. Eventually when it was time to apply for university – by when I’d long realised I wanted to be a journalist – I couldn’t think of a better country to study in. I came for the education – but it was meeting a British man, now my husband, which made me want to stay.

My first point of contact with British society was university; Sheffield, where I went to study journalism. I was one of few non-British students. It wasn’t easy. I wanted to speak to people, but I felt invisible, as though there was no interest in speaking to me. The place was filled with in-jokes and cultural references I didn’t understand. I later told the leader of one journalism student station she was not doing enough to encourage diversity. “We do,” she told me. “I’m Irish!” She was from Northern Ireland.

University made me realise that I would have to work ten times harder to crack into journalism than my British classmates. And I did. I devoted most of my time as a student to work: library, volunteering, internships, part-time jobs to help me through work experience. Given one of those jobs was manning the cloakroom at the Student Union bar, I was quite literally not sleeping.

After graduating, I watched as all those people who were out on the piss while I was sat in the cloakroom until 5am were getting jobs at big companies. But those companies, in my experience, weren’t really interested in a first-generation migrant from Romania. One job I applied for insisted on having GCSE grades, as if to say: if you’re not British, don’t bother. My job search was proving so futile that, at one point, I was seriously considering changing my name to make it sound more British.

As an EU migrant, I often felt my value as a human being, how worthy I was of someone’s friendship and my professional competence were questioned as soon as I opened my mouth, because I have a different accent. But all those obstacles – all the catching up with those cultural and educational touchstones familiar to Brits but alien to me – tell a different story about what competence is – and how much harder first-generation migrants have to work to be seen as equal.

Fearing for my rights after Brexit, I decided to apply for British citizenship. I spent £20 on Life In The UK – a set of study guides designed to prepare you for passing the test. But I sold them and paused my quest for a while, after coming across a bit of small print hidden on the Home Office website, suggesting I needed to prove I’d had private health insurance when I was a student. Had I not been a journalist, inhaling everything I could about the rights of EU citizens in the UK after Brexit, I would have probably applied regardless. Most EU nationals I’ve met here have no idea about the stipulation.

I eventually bought the books again and hired a lawyer too, which – as any young journalist will know – means waving goodbye to your salary. But I had essentially found out after seven years in Britain that under retrospective rules no one ever told me about I was considered ‘unlawful’ for a while. I found this incredibly offensive – no British student is required to have private health insurance or work enough to cover their NHS costs while they are students. Given the sheer number of obstacles to dodge and hoops to jump through, citizenship – and with it, the hope of spending my life with the man I love – seemed like it may never happen.

So when I received the approval email, almost four months after I submitted my application, I was relieved. There had been no way to track my application or get in touch with authorities for an update. I was checking my email several times a day, and the prospect of being rejected filled me with anxiety.

I was grateful for receiving a concession over the health insurance clause – something I should never have needed in the first place – when I should have been feeling grateful for the honour of becoming British in and of itself. Instead, I was simply glad to be able to keep my life as it had been before a referendum in which I had no say, but turned my life upside down.

My hope is that one day I will finally feel like life is not contingent on where I was born. The sooner that day comes, the sooner I can start working on healing the wounds of these last seven years. And then, I will be truly grateful for being British.